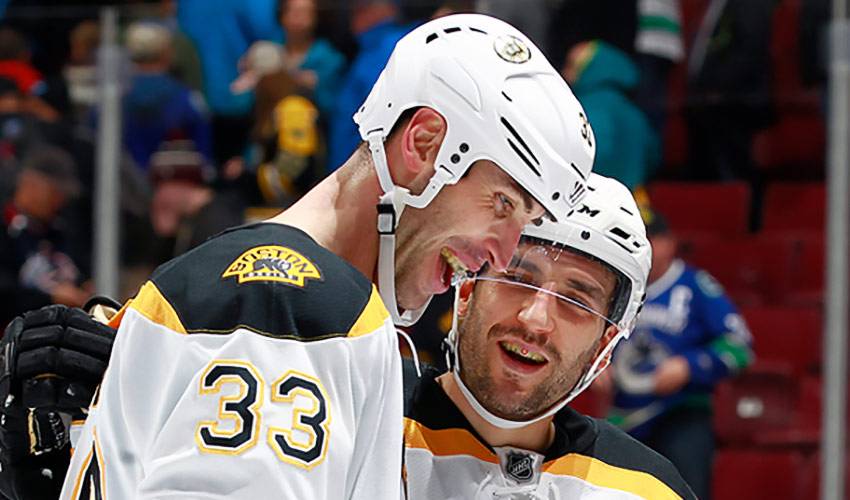 July 1, 2006. You don’t need to remind Bergeron of what that date represents.

Eleven years ago, on the first day of the NHL free agency period, the Bruins landed a big talent and big man, literally, when the 6-foot-9 defenceman from Slovakia inked a five-year deal with the Original Six club.

Bergeron, just over 150 games into his NHL career, reacted to the signing of Chara with equal parts happiness and relief.

“How about I tell you this?” he posed. “It was a blessing when we signed him. It’s not easy to go up against him. It really isn’t.”

As Bergeron recalled, contending with Big Z was always a Herculean task.

The two had faced each other several times when Chara was a member of the Ottawa Senators.

“He was in Ottawa and we saw him a lot the first few years I was in the League,” noted Bergeron, who broke into the NHL in 2003-04, six seasons after Chara did. “He’s a big man and he plays you hard. He plays with a mean streak – not in a bad way – but he just plays hard. He wants to win and he wants that puck.”

Bergeron was reminded of that the first time the two practiced together.>{?

After the first few morning skates as teammates, Bergeron gained an even bigger appreciation for Chara’s intensity, albeit often looking upwards.

“I learned a lot from him,” offered Bergeron. “I also get to play against him every day in practice. Practice makes perfect, right? And practicing against him, I feel pretty lucky. We always try to go up against each other in drills. He battles and it’s awesome. I remember the first year of going up against him in practice in one-on-ones in the corner. My helmet would be sideways and I’d end up on the ice. It’s made me a better player to go up against him.”

“I think he’s a great leader because of the way he plays with so much passion and energy, and also in the way he prepares himself off the ice for each game,” praised Bergeron, of the 40-year-old blueliner. “You just feed off that and follow that lead. As a teammate, he’s a great one to have. You see the intense side of him on the ice, but off the ice, he’s a genuine person, someone who wants to help out and wants to be there for the guys and teach the younger guys.”

It’s been, as Bergeron often termed it, a blessing.

“I’ve been with him so long now – he’s become a good friend of mine,” said the veteran of nearly 910 NHL games. “He’s more than a teammate.”