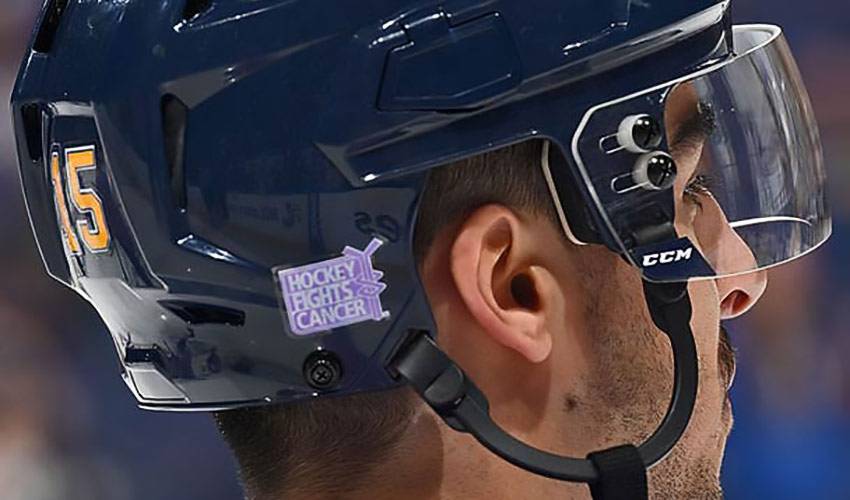 NEW YORK/TORONTO (Nov. 1, 2017) – Hockey Fights Cancer™, a joint initiative between the National Hockey League Players’ Association (NHLPA) and National Hockey League (NHL) as well as a program of the National Hockey League Foundation and NHL Foundation, begins today. The campaign, which unites the hockey community in support of cancer patients and their families, will feature ceremonies, observances, and fundraising efforts throughout the month of November. All 31 NHL® Member Clubs are designating one home game as the official Hockey Fights Cancer™ in-arena awareness night, with unique programming and partnerships with local cancer organizations.

New this season, Nicholle Anderson – wife of Ottawa Senators goaltender Craig Anderson – has been named an official Hockey Fights Cancer ambassador. Nicholle was diagnosed with Nasopharyngeal Carcinoma, a rare form of cancer that effects the nose and throat. Following several months of chemotherapy and radiation treatments, she officially became cancer-free in May 2017. As a Hockey Fights Cancer ambassador, Anderson will be sharing inspirational stories of those impacted by various forms of cancer who are currently undergoing treatment at American Cancer Society and Canadian Cancer Society lodges. These stories and videos will be available on NHL.com, NHL Social, and NHLPA Social platforms.

Fans can get involved by donating online at HockeyFightsCancer.com, share their stories using the official hashtag #HockeyFightsCancer, or purchase Hockey Fights Cancer merchandise at shop.nhl.com. Fans can tune in to national Hockey Fights Cancer broadcast games on NBCSN, Nov. 14 (WSH @ NSH, 8pm ET) and Sportsnet, Nov. 25 (WSH @ TOR, 7pm ET). As part of their Every Save Counts™ initiative, Cigna will continue to donate $1 for every save made during an NHL regular season game and match donations of $25 or more by US donors made online at HockeyFightsCancer.com, subject to a maximum of $100,000.