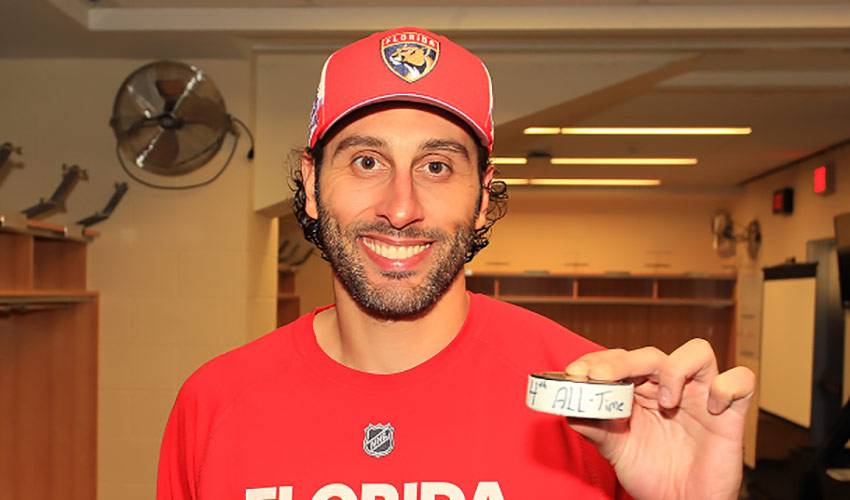 Friday night, Luongo turned aside 24 shots for the Florida Panthers in a 4-1 win over the Buffalo Sabres to surpass Curtis Joseph for sole possession fourth on the league's all-time win list.

Currently in his 18th NHL season, the native of Montreal, Que., was drafted fourth overall in the first round of the 1997 NHL Entry Draft by the New York Islanders. Since that fateful day in Pittsburgh, he's since tended goal in 973 NHL games while posting a career 2.50 Sv% and a .919 GAA. He also totes 73 shutouts to rank 11th on the all-time list.

The four-time NHL All-Star has also been the recipient of the William M. Jennings Trophy, awarded for his standout 2010-11 season performance with the Vancouver Canucks – during which he posted a career-best 2.11 GAA. Along the way, Luongo has made jaw-dropping saves that have induced comparisons to some of the game's greatest – including his own Olympic teammate, Martin Brodeur.

That being said, while there are few who parallel Luongo's skill between the pipes, there are even fewer who can match his wit in 140 characters or less. The hockey community has been nothing short of blessed by tweets from @Strombone1 – his contributions to the Twitterverse have always been sharp, comical, and have taught us a lot about the 38-year-old.

Here's what we've learned though our favourite times he won on Twitter:

He knows he's not Martin Brodeur.

After doing the math.... If I play another 28 years I will still fall about 5-6 wins shy of tying Marty's record!

He has A+ topical humour.

Will playoff tickets go on sale during the first or second intermission @GoldenKnights ?#VegasStrong

He recognizes his strengths.

NHL 3 stars of the week

If anybody finds my jock kindly return it thanks https://t.co/6Rt9S2if4g

Honored to be part of this picture between a true legend and Jaromir Jagr...Congrats bud @68Jagr !!! pic.twitter.com/ZUsWMo7TrQ

Hey @CP0031 do you mind wishing Njeri a happy birthday? Thanks! https://t.co/J1GxS6OfOo

He’s got a romantic side.

He's embraced the role of a dedicated father.

Thank you @NHL for not scheduling any games on Halloween so we can take our kids trick or treating........ pic.twitter.com/QTb397vl3O

He’s an inspiration to his fans.

So I take it you didn't make it then? https://t.co/cnkbF5p5DI

I went 9 for 9 in the shootout tonight! Maybe it really is time to consider bigger nets..... #NHLAllStar

I feel like if Ryan Getzlaf and Krusty the clown had a love child this is what he would look like..... @BarDown pic.twitter.com/BhleleQtmY

You know the boys have confidence in your goaltending skills when 3 guys line up to block a shot.....🚨🥅🚨 pic.twitter.com/Q5QfxrDnsm

Me and Tom Brady have a combined 5 championships! #blessed

And above all, he's a great sport.

Just answering some fan mail from a big fan...... pic.twitter.com/XHNVAUHuys

Man even Bartman got a ring before I did smh https://t.co/qTQKGgU3H4