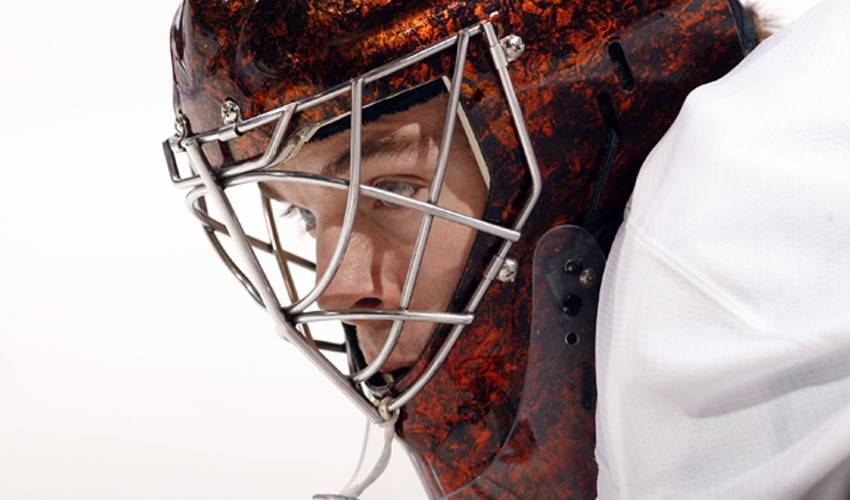 If the Anaheim Ducks are going to have a chance to get back into the Western Conference playoff picture Jonas Hiller will have to be as much, or more, of a difference-maker than he has as of late. The young Swiss goaltender has won his past five starts, including a win over Chicago at the United Center on Sunday, a game that he completely and utterly, stole from the Hawks. With a goals-against-average of 1.80 and save-percentage of .944 since a win against Detroit on January 5, 2010 (a game in which he stopped 38 of 39 shots for a 4-1 Ducks win), Hiller has been dazzling in the New Year. After getting the start in last Saturday's win against Nashville, head coach Randy Carlyle decided to ride the hot-hand and went back with Hiller the following night again the Blackhawks. Hiller proved that Carlyle made the right decision, as he was brilliant in leading the Ducks to victory, stopping 42 of 43 shots against, in a game that saw Anaheim only fire 11 shots on Chicago's goal. A win over the Bruins on Wednesday extended his great run and the Ducks are counting on more of the same from the Olympian-to-be if they want to make a push towards a playoff position this spring.

The Flyers were pretty much left for dead after the slide that led to the firing of former head coach John Stevens, but a corner has definitely been turned as of late. After beginning December by going 2-8-1 in their first 11 games, the Flyers have rebounded, going 8-1-1 in their last ten. Currently on a four game win-streak, Philadelphia has vaulted over several teams to jump back into a playoff spot in the Eastern Conference. They are battling hard in the Atlantic Division, where all five teams are either in or tied for playoff spots at the moment. The Flyers are being led offensively by Mike Richards, Simon Gagne and Danny Briere, who all have points in each of the past four wins this week. Michael Leighton has also proven to be a waiver-wire revelation for Philly, as he has supplied the solid goaltending that the Flyers had been desperate for after the loss of Ray Emery to injury. When doom and gloom had been the prediction of the day for the team through its turbulent times, the one thing that had been impossible to overlook was the overwhelming amount of talent on the roster. That talent is beginning to come to the forefront and the Flyers recent play has certainly proven that they seem to be on the right track.

The rivalry between the Rangers and Devils always makes for an entertaining evening of hockey. This was certainly true again on Tuesday night when the teams met in close battle at Madison Square Garden. The game was dominated by the goaltending duel between two of the best in the game, Martin Brodeur and Henrik Lundqvist. New Jersey and Brodeur ended up victorious, coming away with a 1-0 win but both goalies were credited with shut-outs, as the game was decided in a shootout. Brodeur stopped all 51 shots he faced from the Rangers through regulation time and the extra frame, while Lundqvist turned away all 45 launched his way. Each turned aside another four more shots in the shootout before Patrik Elias put one by Lundqvist to end the game. 105 shots on net in total for a combined save-percentage just a tick above 99% on a night when it was unfortunate that somebody had to lose.

Still only 19, Tyler Myers is making it seem like going to the pros from junior couldn't be any simpler. Blessed with the size of Zdeno Chara and a forward's mobility, Myers leads NHL rookie blue-liners in points and ice-time, is 6th in rookie scoring and is in the top-20 of scoring for all defencemen in the league. A +9 through his first 44 NHL games, Myers has done nothing but impress in his first year, earning mention as a candidate for the Calder Trophy. Last Friday, in a game against Toronto, Myers notched the first two-goal game of his career, while also assisting on Tim Kennedy's first-period PP goal. Myers' goals both came on the man-advantage, with his second of the night being the game-winner, in the 3-2 victory over the Maple Leafs.

“That is my role here and I'm not going to change it. I'm going to be in the front and I'm going to be hard to play against every night."
- Nashville Predators winger Patric Hornqvist, on his Holmstrom-esque ability to be a nuisance to the opposition goaltender through parking himself directly on top of the crease. The 23-year old right-wing leads the Predators in goals, with 18