A Predator on the Blueline 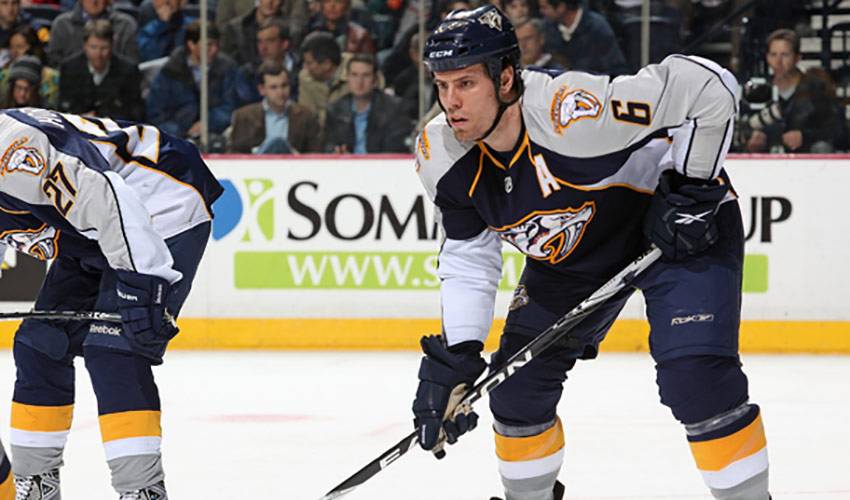 Whenever Bruce Hamilton gets the welcome opportunity to speak of the member of Team Canada's men's Olympic hockey team, he'll tell you the defenceman is as good as gold.

One of the most respected figures in Canadian hockey, Hamilton, President, General Manager and Governor of the Western Hockey League's Kelowna Rockets, is always willing to make time to talk about Shea Weber, his former standout defenceman who has built a reputation as one of the NHL's most well-rounded blueliners.

“He's such a special guy, someone who has never changed,” praised Hamilton, of Weber, who played four seasons in Kelowna, earning WHL West First Team All-Star and WHL Playoff MVP honours in 2005. “He never forgot where he came from. He's still the same person.”

As a hockey player, Weber, who was selected 49th overall by the Nashville Predators in 2003, is even better than during his impressive tenure with the Rockets.

“I didn't think he'd be good, this fast,” said Hamilton, who has directed the Kelowna franchise to four Memorial Cup Tournaments, winning for the first time in franchise history in 2003-04. “But he has been outstanding.”

Weber made his NHL debut on January 6, 2006 versus the Detroit Red Wings. Three months later, on April 6, 2006, Weber scored his first NHL goal against the St. Louis Blues in a 3–0 Nashville victory. He went on to play in 28 games in his rookie season, finishing with two goals and 10 assists.

He added two goals in four playoff games with the Predators before the team was eliminated in the first round by the San Jose Sharks. As a member of Nashville's AHL affiliate, the Milwaukee Admirals, who were still in playoff action, Weber was reassigned to the Admirals roster for the remainder of the AHL post-season.

Weber recorded six goals and five assists in 14 games as the Admirals lost to the Hershey Bears in six games in the Calder Cup Finals.

In his sophomore season, Weber developed into one of Nashville's most key performers. He was named to the Western Conference roster for the 2007 NHL YoungStars Game in Dallas and went on to finish the season with 40 points, adding three assists in five playoff games before the Predators were eliminated by the San Jose Sharks for the second consecutive season.

Weber's third campaign with the Predators was marred by a rash of injuries. After playing only 2:19 of the first period in Nashville's season opener against the Colorado Avalanche, Weber fell awkwardly and dislocated his kneecap. As a result, Weber missed the next six weeks of games before returning to the Nashville lineup versus the St. Louis Blues on November 17, 2007. Shortly after, he suffered another injury, this time his leg, missing 11 games before he returned to the Predators lineup on January 15, 2008.

“It was a serious knee injury, but it didn't affect his skating,” offered Hamilton, who spent six years as Chairman of the WHL Board of Governors. “He plays a big man's game. He does it all out there. If you take liberties with him, he's like an elephant. He won't forget.”

This season, Weber has once again been a force for the Predators, who will look to get back into the Western Conference playoff scene after failing to make the grade last year. He'll also look to win gold with Team Canada at the upcoming 2010 Winter Olympics in Vancouver.

“I'm heading to Vancouver to see the men's hockey semis, bronze and gold games, so hopefully, I'll get a chance to speak with him,”said Hamilton, who will also look to chat with another former Rockets' and Team Canada defenceman, Duncan Keith of the Chicago Blackhawks.

And even if the Weber and Hamilton don't get a chance to talk at the Olympics, there will be ample time afterwards.

“We talk a lot,” offered Hamilton. “It's always about hockey. The only thing that we always tell him every time is just how proud we are of him. Not only for what a great player he is, but how he has always remembered us. He's still actively involved in our team through our alumni association. When he was with us, we would have 50-60 community events a year and he'd be at least half of them.”

All of which Hamilton is extremely grateful for.

“He's a very sincere guy, someone who if you ask a direct question, you'll get an honest answer. If you had a son, you'd want Shea Weber to be his mentor. He's the ideal role model.”