With the Olympics behind us, the race for the post-season is heating up 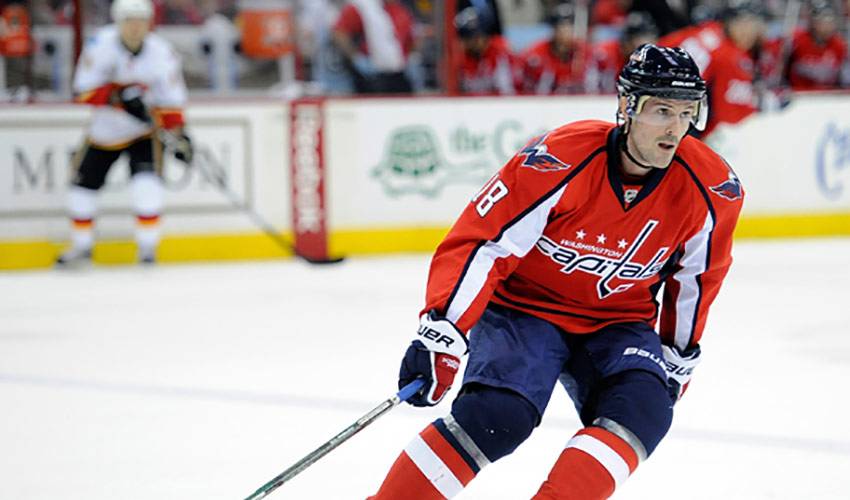 As we return from the Olympic break, the Capitals remain the leader in the chase for the President's Trophy, sitting three points ahead of the San Jose Sharks. This team, which has been an absolute beast so far this season, made some fantastic moves at the deadline to acquire some defensive help and grit up front. Scott Walker, acquired from the Carolina Hurricanes, has already made his presence felt, scoring a pair of goals in his first game with the Caps. Milan Jurcina and Joe Corvo will add to a blue-line that was already very capable before the deadline, and Eric Belanger brings the kind of depth and intangibles that are highly coveted at this point of the schedule. General Manager George McPhee has been very busy all season and has shown no fear in pulling the trigger on a deal to tinker with his team. Washington was already well-established as one of the best teams in the league, but Wednesday's trade deadline saw a the team gain a little more polish and finalize a roster that is not only built for the playoffs, but is built to thrive.

Late season surges are starting to become the norm for the St. Louis Blues, and the Western Conference playoff teams are certainly seeing the Blue coming fast in their rear-view mirrors. St. Louis has won five straight games going back to before the Olympic break and are now just a point behind 8th place Detroit. Chris Mason has been in net for each of the victories during this latest charge and stopped 66 of 69 shots this past week to give his team wins over the Coyotes and the Stars. Both were must-wins for St. Louis, with Phoenix serving as one of the Western Conference's upper-echelon teams this season and the Stars nipping at the Blues heels in the standings. Chris went into the break as the stand-by goalie for the Canadian Olympic team, and his reliability has provided a young St. Louis team with faith that they have a strong last-line of defence between the pipes. The offensive talent has started producing for the Blues and their confidence is soaring at the time of the year when you want it to be at its highest.

After missing a large chunk of the season, David is certainly rounding into form, and this past week was his best to date since his return. David has now played nine games since the October 24th game that saw him injured on a hit from Philadelphia's Mike Richards and he is starting to regain his offensive flair. The 25-year old had goals in back-to-back games this week, for the first time since the last two games of the 2008-09 season, and his four points in this past Wednesday's game were a season high. That particular game was David's first against Richards and the Flyers since his return and he promptly challenged the Flyers' captain to a first-period fight. It was the first time that David had dropped the gloves in his NHL career, but it set the tone for the remainder of the game. Florida put forth one of their best efforts of the season, winning a wild contest by the score of 7-4.

Fresh off a stint as a member of the USA Hockey entry in the 2010 Vancouver Olympics, Jonathan picked up right where he left off before the break, providing the upstart Kings with solid play between the pipes. The 24-year old has been incredible since the start of the new year, posting a 15-5-0 record since the calendar page turned to 2010. In his latest win, Jonathan earned himself a spot in the Kings' franchise record-books, as his 36th victory of the season gave him the most-ever for an L.A. goalie in one year. After beating Dallas on Tuesday, Jonathan passed Mario Lessard's mark, set in 1980-81. With an 11-2-0 record in his last thirteen games, chances are pretty good that Jonathan will be adding a few more wins to his now-growing record and put some distance between himself and Lessard.

When it comes to games-played milestones for hockey players, there are two different sets of standards; one that applies to forwards and defencemen, another that applies to goalies. 1000 games is the benchmark for the forwards and D, while 500 games is the gold standard for netminders. In a 5-1 loss to the Kings on Tuesday night, Dallas' Marty Turco became the 57th goalie in NHL history to play in his 500th game, and only the fifth to ever do it all with one team. Always extremely capable while stickhandling, Marty put an exclamation point on his historic evening by assisting on Mike Riberio's third-period goal. Congratulations from NHLPA.com on reaching this outstanding accomplishment Marty!

“Oh, was that tonight? That's pretty cool. I didn't realize I've beat everybody. It's something I can tell my grandkids.”

- Manny Legace, goaltender of the Carolina Hurricanes, on learning that a victory over the Ottawa Senators on Thursday night gave him one against every one of the NHL's 30 teams during his 11-year career.