Alfredsson, Brodeur and Tkachuk all highlight this edition of the Weekly Review 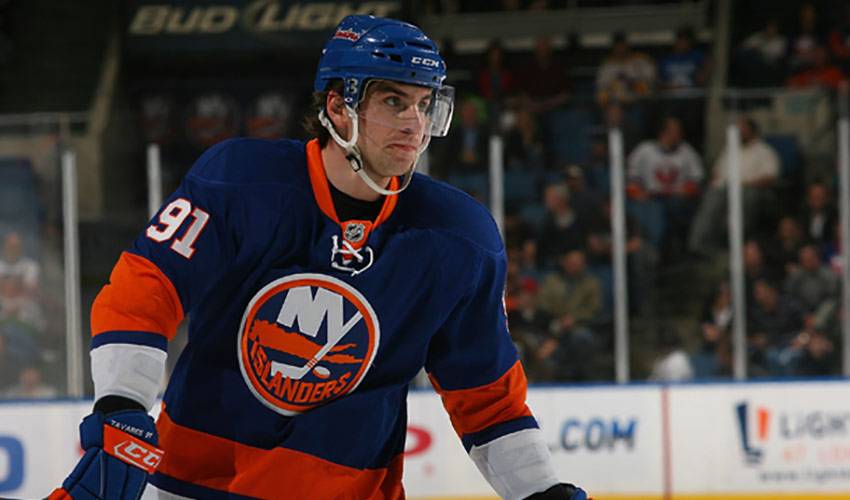 While there will be no playoffs for the Islanders this season, they are certainly playing with pride on Long Island. In the past week, the Islanders have won three straight, with each victory coming over a team that is either in the playoffs or jockeying for position. The Flyers, Senators and Canadiens all went into Nassau Coliseum hoping for an easy two points, but the Islanders played the spoiler in each game. Against Philadelphia, six players (Blake Comeau, Trent Hunter, Sean Bergenheim, Jon Sim, John Tavares and Frans Nielsen) registered multi-point games, as the Isles snapped a 15-game losing streak against the Flyers. Martin Biron played the hero against the Senators on Saturday night, with a late goal by Matt Cullen snapping his shut-out bid in the Islanders' 4-1 win. With the Canadiens in town on Tuesday night, the Isles staged a comeback in the 3rd period, tying the game with two minutes to play. Three points by Bergenheim extended his point streak to five, while Matt Mouslon scored the game-winner in the shootout. The Isles currently have 78 points on the season, handily eclipsing last year's mark of 61. They may finish 5th in their division again, but it would be impossible to ignore that this young team has improved leaps and bounds in one year.

Martin has certainly been at his stingy best lately, recording two straight shutouts over the Hurricanes and Thrashers. The back-to-back doughnuts gave him the league lead in wins and shutouts, moving him ahead of Evgeni Nabokov and Ilya Bryzgalov. Tuesday's win in Atlanta was the 600th win of Marty's career, making him the first goaltender in league history to reach that plateau. Since being pulled after two periods in Philadelphia on the 28th of March, Marty has only allowed three goals in his last four starts.

In two games that Montreal desperately needed last week, the Habs turned to Jaroslav Halak on back-to-back nights versus Philadelphia and Buffalo. Jaroslav responded in kind, registering two shutouts in 24 hours. The Flyers peppered him with 35 shots, including 14 in the third period, in a game that they needed just as badly as the Canadiens. Yet, the Flyers were unable to slip anything by the Slovak, losing 1-0. The next night, at home against Ryan Miller and the Sabres, the goaltending match-up featured two Olympians, but it was the Habs that came out the victors again, backstopped by Jaroslav's 29 saves. It was the first back-to-back shutouts for the Habs since Cristobal Huet accomplished the feat in 2006.

The odds-on favourite to win the Calder Trophy as the NHL's rookie of the year, Matt is entering the final stretch of the season with 24 goals and 31 assists in his inaugural campaign. But it was a goal that will not count towards his totals that was the 19-year old's pinnacle moment of the season, occurring in Vancouver on Tuesday night. With a playoff berth hanging in the balance for his young team, Matt was the sixth shooter hoping to break a 3-3 tie in a shootout against the Canucks. With Olympic gold-medal winning goaltender Roberto Luongo standing in his way, Matt deked hard to his right and then snapped a hard shot over Luongo's blocker, sending his team into the playoffs. The Avalanche had been struggling mightily as of late, weighed down by those final points needed to get into the postseason. With the most important goal in his young career, Matt proved that he is more than capable of shouldering as much of the burden as possible when the Avs need him the most.

With a game against the Panthers on Tuesday, Ottawa's Daniel Alfredsson reached the 1000-game plateau of his career. The 37-year old has played his entire career as a Senator and becomes the ninth player to accomplish the feat this season. Daniel's name now joins 236 other players to have reached this plateau and Ottawa's captain will be honoured by the only city he has called home over his 14-year career, as this coming Saturday will be “Daniel Alfredsson Day” in the nation's capital. Congratulations from NHLPA.com on reaching this outstanding accomplishment Daniel!

“I have been privileged to have a long career in this terrific league and play for first-class organizations” - St. Louis Blues' forward Keith Tkachuk upon announcing that he will retire from hockey upon the end of this season.