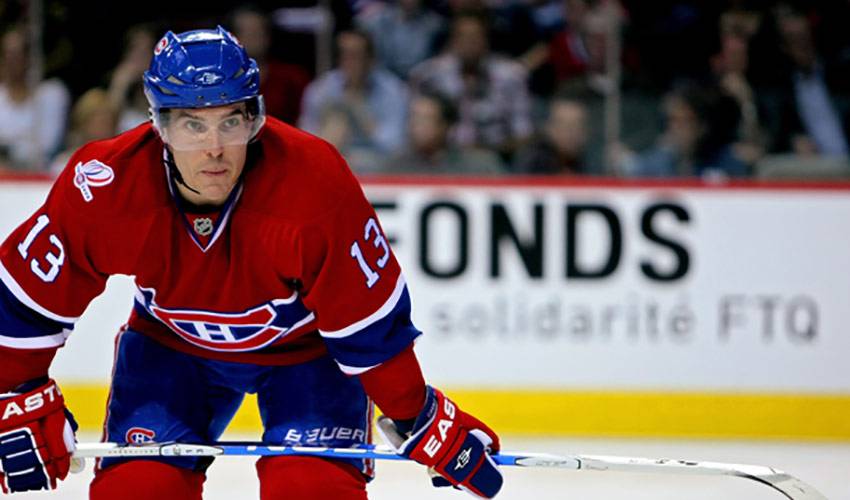 Lucky No. 13 proved to be just that for Mike Cammalleri and the Montreal Canadiens on a must-win night in front of an adoring crowd.

Down two games to none to the Philadelphia Flyers in the Eastern Conference final, the Canadiens were in desperate need of a spark on home ice.

Blanked in both games in Philadelphia, the Habs were looking for a quick start against a tenacious opponent and an off-the-bench starting goaltender in Michael Leighton who had stonewalled them time and again.

Leave it to Cammalleri to make a statement.

Cammalleri netted his 13th playoff marker and Tom Pyatt added another first period goal to stop Michael Leighton's two-game shutout streak as the Canadiens downed the Flyers on Thursday evening to get back into the series.

“Confidence is kind of a relative term,” offered Cammalleri, who has carried his strong regular season form into the playoffs. “It gets thrown around in many different ways. But I feel good. I feel healthy. I like our team. I like the way we're playing as a group.”

After sending the Washington Capitals and the Pittsburgh Penguins to the sidelines in the first and second rounds of the post-season, respectively, Montreal, the eighth seed in the East, has run into an equally upstart Flyers squad, a seventh seed equally intent on moving on to the Cup finals.

So, after a pair of disheartening losses in Pennsylvania, a statement game at the Bell Centre was a necessity.

And it was Cammalleri who started the proceedings, a player with an endless amount of offensive savvy, but one who is quick to point out the contributions of his teammates to his strong numbers.

“It's our team,” reasoned Cammalleri, as to the reason behind his personal success. “It's always about team play. The guys making good plays and making plays where I end up putting the puck in. It's them making the plays.”

But there's no doubt it's Cammalleri who is finishing those plays off.

It's also no surprise the Ontario native has drawn comparisons to Guy Lafleur, one of the most beloved Canadiens of all time.

“I don't really know what to even say about that,” admitted Cammalleri. “It's those guys, the excellence that they had, the winning, and the tradition, and everything they've done - not only Montreal but hockey - I don't think you should mention it in the same breath. It's just one of those things.”

But there's no denying Cammalleri, in his first campaign with Montreal, after signing a five-year contract worth US$30 million last July, is something special.

And in spite of the pressures of playing in one of hockey's most passionate cities, Cammalleri feels honoured to be wearing the bleu, blanc et rouge jersey.

“To me, it's a great thing that Montreal fans have an opinion,” he told NHLPA.com. “Why shouldn't it be that way? They are passionate, they care and they want the team to win. That is a reflection of what the players are like, too. We all want the same thing.

“Knowing the history and the grandeur of the team, it didn't take me long at all to appreciate how special it is to play in Montreal.”

And it certainly didn't take much time for Montreal supporters to take notice of the 27-year-old left winger, who had 26 goals and 50 points in 65 regular season games in 2009-10, including his second hat trick of the season in a 5-1 win for Montreal against the Boston Bruins on December 4, the night of the Canadiens' 100th anniversary.

The 49th overall selection of the Los Angeles Kings in 2001 would love nothing more than to deliver another championship to a city that already has a league-best 24 Cups.

“The best part of being on a team, regardless of the sport, is that you rely on everyone in order to achieve success.”

Still, it never hurts to be just like Mike.