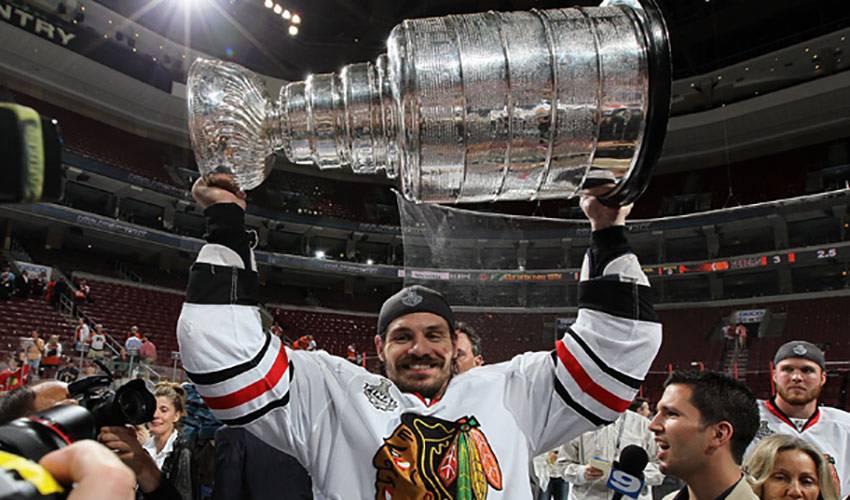 Of all the memorable moments associated with winning a Stanley Cup, Brent Sopel will tell you the most gratifying is in seeing the reaction of others.

Almost from the moment he learned to skate at the age of two, Sopel, now 33, often wondered what it would feel like to hoist hockey's greatest team prize aloft.

“When you skated on the outdoor rinks as a kid, you always thought, ‘Wouldn't it be great to win the Cup?'”, said the Calgary, Alberta native. “All your friends thought about it. Everyone talked about it. You could see how excited everyone was at the very thought of winning it.”

Sopel celebrated his first Cup win as a member of the Chicago Blackhawks, who bested the Philadelphia Flyers in six games in the 2010 championship.

The victory, capped by Patrick Kane's overtime tally, gave the ‘Hawks their first Cup triumph since 1961.

In the aftermath of the victory, the defenceman found himself humbled by the outpouring of emotions from family, friends and fans.

“When I was on the ice, my wife and children came down to celebrate,” recalled Sopel, the 144th overall selection of the Vancouver Canucks in the 1995 NHL Entry Draft. “They were crying, but obviously, they were overjoyed. To see their response was just wonderful.

“The same thing applies to the fans. To see how thrilled they were, how happy it made them feel – it was great. Chicago is a great sports city and the fans definitely deserved this. I was happy for all of them.”

Still, Sopel admits, the enormity of the accomplishment really didn't hit home until the next day.

“When you wake up the next morning, you can't help but smile,” said Sopel, who was traded by the Vancouver Canucks to the New York Islanders for the Islanders' second round selection (Bryce Swan — later acquired by Anaheim) in the 2006 NHL Entry Draft, on August 3, 2005. “That's when it sinks in.”

“It was such a surreal moment when Patrick scored the winner,” continued Sopel. “I think the only two people on the ice that knew he scored were Patrick and one of the players on the Flyers. We couldn't tell that it had gone in, but Patrick's reaction certainly made us believe it did.”

For Sopel, who played in 55 games for the Los Angeles Kings, before he was dealt back to the Canucks on February 26, 2007, it undoubtedly represented his greatest hockey moment.

“You never want that feeling to end,” he told NHLPA.com, on Wednesday, the day he, Dustin Byfuglien, Ben Eager and Akim Aliu were traded to Atlanta in exchange for the 24th overall pick in the 2010 NHL Entry Draft, the 54th selection, Marty Reasoner, Jeremy Morin, and Joey Crabb. “To achieve it with a great group of players made it all the more wonderful of an experience. I feel very fortunate.”

But for the player who signed as an unrestricted free agent with the Chicago Blackhawks on September 28, 2007, sharing that good fortune doesn't end with his teammates.

Sopel, who has played nearly 600 regular season games at the NHL level, will be paying tribute to Brian Burke, the current President and GM of the Toronto Maple Leafs who held the posts with the Vancouver Canucks from 1998-2004.

On February 5, 2010, Burke's son, Brendan, died, at the age of 21, from injuries suffered in a car accident in Indiana. Sopel will honour Brendan, who was openly gay, by bringing the Stanley Cup to the annual Chicago Pride Parade, slated for this Sunday.

“One of my first thoughts after winning the Cup was in remembering the people that have helped me and supported me in my career,” said Sopel. “I thought a good way to pay respect to Brian and Brendan would be to have the Cup in the Pride Parade.

“I recently spoke with Brian and told him of my intentions. I want to keep the details of that conversation private, but he was happy. No one should ever have to bury their child and I wanted to find some small way to pay tribute to Brendan.”

As for what will go through his mind when he displays the Cup this weekend, Sopel is sure of one thing.

“It will be a nice reminder that winning the Cup isn't only special to you. It touches so many lives. You never grow tired of seeing just how happy people are about it.”