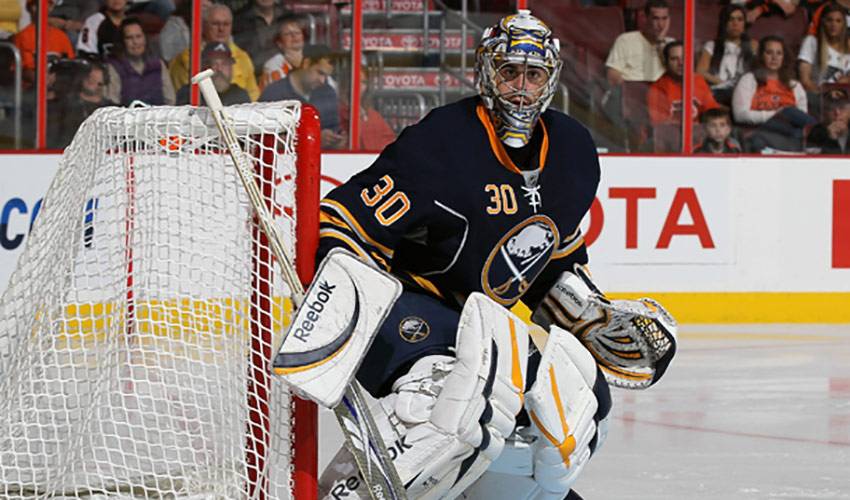 It was anything but a surprise to see Ryan Miller walk away with this year's top goaltending honour. You could even go so far as to say it was in the cards.

The 2009-10 season was indeed a memorable one for Miller, Buffalo's brilliant backstopper extraordinaire, who further solidified his standing as one of hockey's best between the pipes.

He finished the campaign with a 2.22 goals against average and a .929 save percentage, leading the Sabres to a Northeast Division Title. The 29-year-old recorded 41 wins, breaking his former record of 40 wins posted in 2006-2007.

Miller's 41 victories broke the Sabres franchise record for single-season wins by a goaltender originally set by him in 2006-07.

The Michigan native was equally impressive at the 2010 Winter Olympics, helping the U.S. side land a silver medal in the tournament.

On June 23, in Las Vegas, Nevada at the 2010 NHL Awards, Miller was awarded the 2010 Vezina Trophy, beating finalists Martin Brodeur and Ilya Bryzgalov for the honour. That same night, Miller also became the first American-born player to win the NHL Foundation Player Award.

The Foundation Award is given to a player “who applies the core values of hockey —commitment, perseverance and teamwork—to enrich the lives of people in his community."

Miller, who is well-recognized for his extensive charity work, was humbled by both awards, including the Vezina.

“As a kid, you look at it,” said Miller, of the Vezina, which was established in 1926-27. “I remember getting the decks of playing cards, the pack of playing cards, and it always had the award nominees. It was just so cool. Thinking as a goaltender that was something I wanted to do, and watching it on TV. My heroes are on here, so this is pretty amazing.”

Selected in the fifth round, 138th overall, by the Sabres the 1999 NHL Entry Draft, Miller enjoyed a stellar collegiate career with the Michigan State University Spartans. He set an NCAA record with 26 career shutouts and was the recipient of the Hobey Baker Award in 2001, when he led the country in wins, win percentage, save percentage (an NCAA record .950 mark), goals-against average and shutouts (an NCAA record 10).

Miller was the 2001 Big Ten-Jesse Owens Men's Athlete of the Year.

Miller became only the second Spartan to win the Hobey Baker Award and only the second goaltender (Robb Stauber won it in 1988). He was the CCHA's Goaltender of the Year in all three of his seasons in East Lansing, and was the league's overall MVP twice.

Ten members of Miller's family, including his grandfather, father, uncle, five cousins (including Kelly, Kevin and Kip Miller), and his younger brother Drew, have played college hockey at Michigan State.

Miller has carried his collegiate form into the NHL. In 333 regular season games, the man who was awarded the MVP and Best Goaltender honours at the 2010 Olympics, has 187 wins, including 17 shutouts.

Big numbers, however, hasn't translated into a big ego.

“I'm going to try to do things the right way and give back where I can,” said Miller, who, along with his father, Dean, started the Steadfast Foundation which supports cancer patients and their families. “And just playing your hardest, you know, people pick up on that.  So I think it's an attitude that we're trying to keep with the Sabres there and do things the right way. That's how I'm going to try to continue to approach things.

“I've been very fortunate in many aspects of my life,” continued Miller, who also owns a clothing store called The Refinery. “The foundation is very important and meaningful to us.”

Being at the top of his game is equally critical to Miller.

“It's just being smarter, getting ahead of things. I'm a skinny guy. I have to change my workout routine, and about two summers ago I did that. And it's been a steady progression with learning and evolving as a player, and putting the work into the mental side and the physical side and the time with the team. The stuff that makes us good on the ice.”

“They're rabid hockey fans, so every night they expect you to be on your best.  I think that helps you as a player.  They want to see you go out and perform and give it your all, and that's the kind of attitude you want to bring every night.”