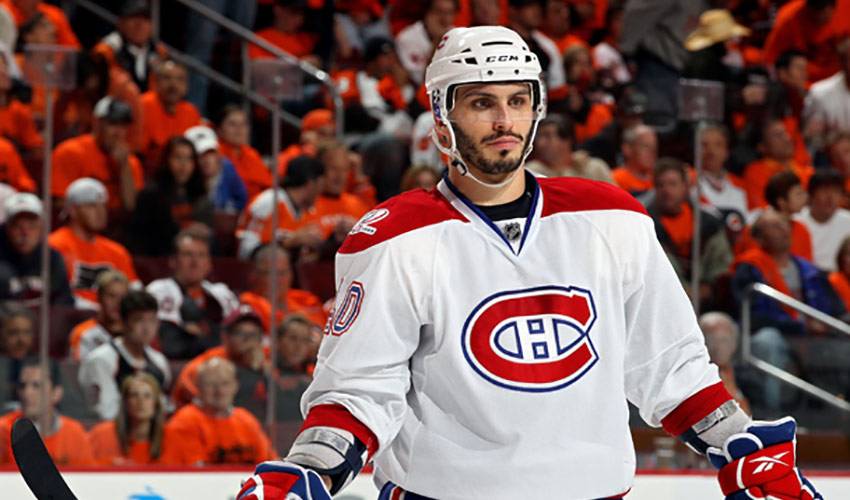 The 2009-10 NHL regular season, on a personal level, was not what Lapierre had anticipated.

But the Quebec native, who recently hosted his second annual golf tournament, is eager for the new campaign to get kick-started, one he hopes is nothing like last year.

“Personally, it was a very tough year for me,” said the 25-year-old forward, who contributed 14 points in 76 games. “I wasn't happy with it. I had issues with my ankle and that was tough. But I was happy with how I played in the playoffs. The most important thing was how well the team played.”

Projected to be in a dogfight for a playoff berth in 2009-10, the Canadiens, who finished fourth in the Northeast Division, made it all the way to the Eastern Conference finals before bowing out in five games to the eventual Stanley Cup runner-up Philadelphia Flyers.

For his part, Lapierre, who had surgery on his ankle last summer, contributed three goals and one assist in Montreal's spirited post-season run.

It was his highlight-reel, game-winning tally in Game Six that propelled the eight-seeded Habs to an eventual seven-game series triumph over first-seeded Pittsburgh in the opening round.

“You never count a guy like Max out,” offered teammate Mike Cammalleri, after Lapierre's key goal.

Blessed with an ideal blend of speed, size and strength, there is a certain tone in Lapierre's voice that suggests the centreman is hardly on the ropes, trying to fight his way back to form. Instead, the 61st overall selection in the 2003 NHL Entry Draft sounds quietly confident, but not cocky.

“It's been a summer of training, that's for sure,” laughed Lapierre, who played his first NHL game on November 15, 2005 against the Florida Panthers. “Summers have always been that way for me. I want to be in top shape when camp begins and carry that momentum into the season.

“It's been a different training program for me this time,” continued Lapierre. “I have a boxing coach that I'm using, plus I've been riding a bike that uses computers to give you all types of useful information. It's been good.”

During the 2006–07 season, Lapierre was brought in to replace injured defenceman Mathieu Dandenault, and excelled, contributing three goals and one assist. He was subsequently sent back to the Hamilton Bulldogs, Montreal's American Hockey League affiliate, after Dandenault returned from his injuries.

Lapierre was later recalled to NHL duty, but when the Canadiens missed out on the playoffs, he returned to Hamilton to help Hamilton in the Calder Cup playoffs.

In late 2007, he was recalled to the Canadiens and has been playing ever since as a third and fourth line centre. Lapierre notched a Gordie Howe hat trick (goal, assist and fight) against the New York Rangers on December 4, 2008. Later in the season, on December 29, 2008, in a game against the Florida Panthers, Lapierre recorded his first career NHL hat trick.

“Last year, we proved we could play with anyone,” said the veteran of 255 regular season NHL games. “We played hard and I think the fans really took notice of that. It would be great if we could build on what we did and take it to another level.”

While he's determined to take his own game to another level, Lapierre did find time before the hockey season gets into full swing to try out his golf swing for a good cause.

“We raised $50,000,” said Lapierre, of the event that raised funds for the Montreal Canadiens Children's Foundation. “We had 26 celebrities and it was a great day.”

“It was the first time I had golfed since last year's tournament,” said Lapierre. “I don't think there is any worry about me taking up golf in a serious way. It wasn't pretty.”

Rather, Lapierre's main focus is making sure he and the Habs keep par with their Eastern Conference rivals.

“What we did as a team last year was good, but I know we want to be even better this year,” he offered. “We all can't wait to get it going again.”