At the final seminar of the World Hockey Summit, discussion focused on how hockey can be made more accessible to those new to the sport 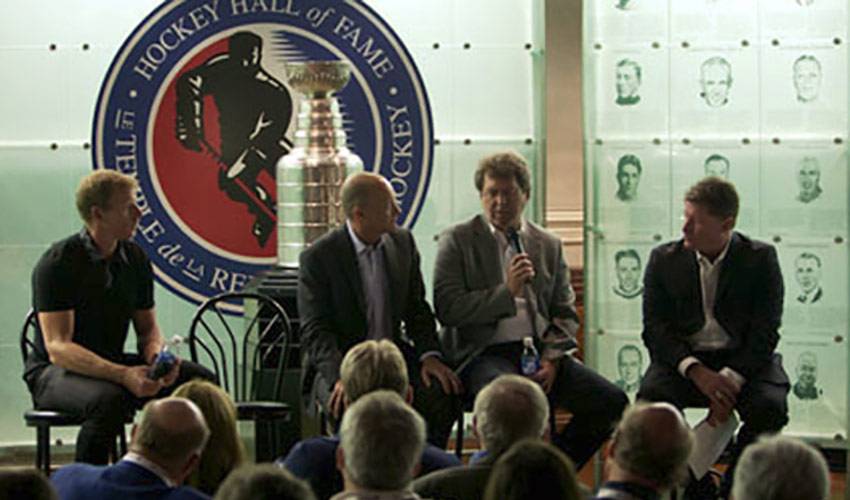 The World Hockey Summit reached its conclusion on Thursday afternoon, finishing with a seminar titled “Growing Participation in Hockey”, with discussions centering around the need to reach out and get more people involved in the game. Darren Eliot, a former NHL player and current broadcaster for the Atlanta Thrashers, moderated the panel on the subject, one that is very familiar to him as he is the hockey development liaison for the Thrashers. In this role, Eliot reaches out to the Atlanta community to encourage its residents to learn more about hockey and take part in a game that is still growing in popularity there.

Tommy Boustedt, a Swedish representative of the IIHF, began the discussion by describing the national minor hockey programs available to children in his home country, the Three Crown hockey school, as well as explaining the role of parents that have in helping their young kids develop properly into the sport. Having come across parents who are not sure which skate goes on which foot for their children, Boustedt was able to outline some trouble areas that became recurring themes for the other speakers.

Dr. Paul Dennis, recently retired from a 20-year career with the Toronto Maple Leafs as a player development and mental skills coach, lent his expertise in those fields to the attendees as the first panelist. Believing that delivering key, positive messages to kids serves as encouraging reinforcement for them to want to stay in hockey, Dr. Dennis stressed the importance of the mental challenges children face in sports and what can be done to ensure their best chances to succeed.

One suggestion made by Dr. Dennis was to simply let the kids enjoy themselves, and enjoy the game for what it means to them. “We want them to meet our expectations in hockey as parents,” the current teacher of sports psychology at the University of Toronto and York University said, “not for them to meet their own.”

Pat Kellehar spoke next, the assistant Executive Director of Membership Development for USA Hockey giving his insight into the methods that their program has used to face the challenges of developing hockey in a country that has many sporting options for kids and parents alike to choose from. Stressing that the parents are the ones they need to gear their invitations to the game towards, Kellehar broke down the areas that he feels are the biggest obstacles to overcome in showcasing hockey as a good choice.

Kellehar described the boundaries that USA Hockey needs to help parents get past are the cost, the commitment and the unique culture, while listing common stereotypes parents have of the game as it being too expensive, too violent and too much of a commitment for both them and their kids. The techniques Kellehar and USA Hockey use to get around these include selling parents on the resources, such as rinks, they have to help, creating a consistent brand of youth hockey and promising three things – that their kids will have fun, will get excellent guidance from their coaches and the sense of achievement they gain from doing something new and getting better at it.

Cyril Leeder, president of the NHL's Ottawa Senators, was next and spoke of the initiatives that the club has taken in the city of Ottawa, attempting to foster the growth of the game with children, girls, women and new Canadians. Using a blend of work on community rinks, coach development, signature events with children and underprivileged families, Leeder described many of the attempts the Senators are taking in order to keep “hockey the sport of choice for Canadians.”

John McDonough, president of the Stanley Cup champion Chicago Blackhawks was the next panelist to offer his take on developing participation in hockey, offering the incredibly successful blueprint the Blackhawks have utilized in making hockey relevant again in the Windy City. Having come to the hockey team in 2007 from the Chicago Cubs, McDonough has been part of an extremely aggressive plan to put a successful product on the ice, one that will draw the fans in through its accomplishments. Having won the game's ultimate prize, McDonough said the team is making significant in-roads against the traditionally more popular sports of baseball and basketball in the city, noting that since the Cup victory, the team is “trying to manage an explosion of interest.”

Finland's Director of Coaching Arto Sieppi spoke after McDonough, drawing on some of the angles his Scandinavian counterpart Bourstedt took in his own presentation. Showing the annual breakdown of kids who occupy the ranks of the Finnish “Lion's Road” program, Sieppi demonstrated how, of the 33,000 kids born in the country every year, only two or three of those will ever be NHL or Olympic caliber players. Delivering personal anecdotes of his coaching experiences, Sieppi continually stressed the importance of making the game fun for kids, a common theme throughout the seminar. When kids have fun with the game, Sieppi maintained, that is when they'll be motivated to stay with it.

The final speaker of the “Growing Participation in Hockey” seminar was Hockey Canada's Chief Executive Officer, Scott Smith. Saying that “Hockey Canada is in the business of meaningful experiences,” Smith outlined how his team seeks out both parents and children to give them just that. Smith then presented several key statistics showing a trend in the country that shows declining numbers in hockey participation amongst Canadian children aged 5-19, and a growing trend towards a population with more new Canadians. Smith described Hockey Canada's recruitment and retention program as the best means to counteract these developments, hoping to give parents a consistent brand of hockey that they can be comfortable having their children be a part of.