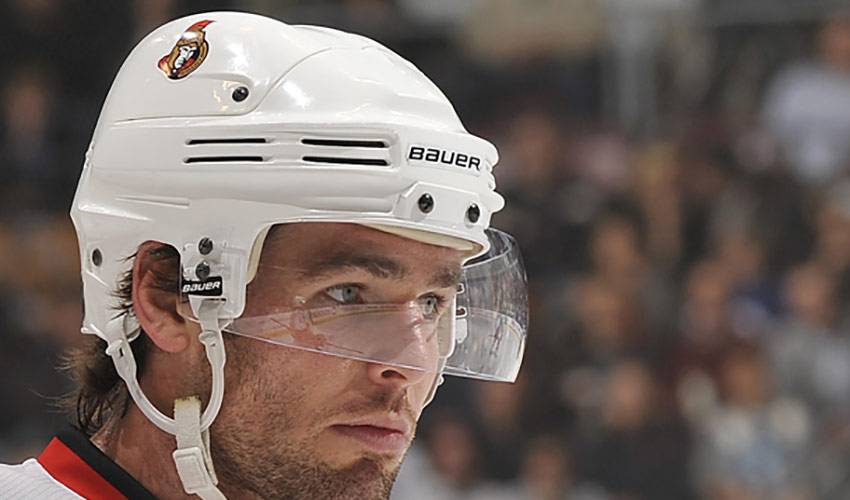 Mike Fisher is ample proof that you can't keep a good hockey player down.

With nearly 650 games played at the NHL level, including four, 20-plus goal seasons, Fisher, who has played every one of those games in an Ottawa Senators uniform, has enjoyed his fair share of success over the years.

The start to his big-league life, however, was anything but the dream start he envisioned.

Just 32 games into his NHL career, one that produced nine points and reason to believe the native of Peterborough had all the tools to be an impact player, a knee injury on December 30, 1999, felled Fisher, sidelining him for the rest of the season.

Not what Fisher had in mind, but not nearly as devastating as some might be inclined to believe.

“You always hope to establish yourself in your first year, but unfortunately, it didn't work out that for me,” said Fisher, selected in the second round (44th overall) of the 1998 Entry Draft. “You worry about how it will affect your performance, but it also pushes you to work that much harder.”

Rehab, coupled with the reassurance he would fully recover, gave Fisher ample reason to look ahead rather than lament. In spite of playing less than half the season, the Ontario Hockey League graduate had established himself as a player with great potential.

Before he'd ever played a game in the NHL ranks, the line on the 6' 0”, 210-pounder, read something like this: great skater, solid contributor in both zones, great attitude, solid second- or third-line centre prospect.

His three-year junior hockey career (one season with the Peterborough Bees of the OPJHL & two more with the Sudbury Wolves in the OHL) was impressive in many regards. Seasons of 26, 24 and 41 goals, respectively, proved his value as a point-producing forward. Fisher also boasted a strong physical game, banging bigger opponents with well-timed and well-placed bodychecks.

“I need to bring a physical edge to the game in order for me to be effective,” said Fisher, who finished his junior career in 1998-99 with 211points, recording 106 in his final year. “I've always enjoyed that part of hockey.”

That was obvious in Fisher's sophomore NHL season, a year in which the forward netted seven goals, three of which were game winners, and had 19 points in 60 games. He also dished out 129 hits, an average of just over two per game.

But once again, Fisher had trouble averting the injury bug.

During a game in early November of that season, Fisher left the contest with a sprained left sterno-clavicular ligament, an injury that would sideline him for 22 games.

“I guess it just boils down to bad luck,” he said, in reference to the injury that put him on the shelf. “It was disappointing and aggravating, but I wouldn't let it get to me.”

Once again, Fisher was faced with a familiar and unwanted situation. Still, he managed to remain upbeat and eager to get back on the ice and make a difference.

He also had a game plan.

Less than 100 games into his big-league career, Fisher focused his energies on attaining a more complete playing style.

“The hardest part is trying not to do too much, but working towards being an all-around player,” said Fisher, who played his first NHL game on October 2, 1999, against Philadelphia. “I figured things would finally turn in my favour in terms of avoiding injuries and I wanted to seize the opportunity.”

By the time the 2001-02 season got underway, Fisher was armed with a healthy body and a blueprint for success.

“Avoiding an injury was certainly at the top of my list,” he said with a smile. “If I could accomplish that, I felt it could be a good year.”

The end result fell somewhere in the middle.

On the positive side, Fisher tied for sixth in the league with three shorthanded goals, scored four game-winning goals and was successful on his first-ever penalty shot. When teammate Martin Havlat wasn't able to compete in the YoungStars Game as part of All-Star Weekend named as his replacement. He also won December Molson Cup honours as Ottawa's player of the month and was co-winner in January that season.

Shoulder injuries, however, caused him to miss 24 games and a knee injury knocked him out of post-season play.

“It was a very up-and-down year for me, for sure,” offered Fisher, who managed to record 15 goals and 24 points in 58 games. “I just wish I had more of a chance to play.”

He was thinking the same things in 2003-04, a season in which Fisher missed 58 games due to injury.

There have been some nagging ailments since then, but Fisher, who was named an alternate captain at the start of the 2009-10 season, has endured and become a solid presence on a nightly basis in the Senators lineup. A respected leader and solid two-way player, the 30-year-old, who is married to country superstar Carrie Underwood, has shrugged off his hard-luck times with a winning attitude.

Recently, Fisher had two more reasons to smile, as he notched a pair of goals in a 3-0 home win over the Toronto Maple Leafs in the latest 2010-11 installment of the ‘Battle of Ontario'.

“Missing games is never an easy thing to deal with,” said Fisher. “But the best thing you can do is work hard at getting back and remain positive. That's what I've always tried to do.”