Swimming with the Sharks

Rookie Logan Couture is making an impact in San Jose 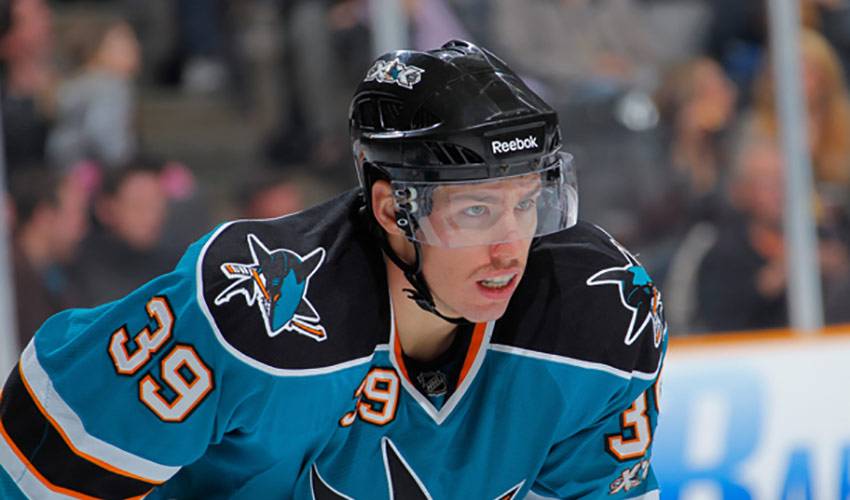 Logan Couture is doing just fine on his own when it comes to his NHL career, but he's still getting by with a little help from his friends.

In his first full season with the San Jose Sharks, Couture, the ninth overall selection in the 2007 NHL Entry Draft, plays and acts very much like a seasoned big-league veteran.

After five goals and nine points in 25 games with the Sharks in 2009-10, the native of Guelph, Ontario is off to a quick start this season, reaching the 10-goal mark after less than 25 games, after a two-goal performance Thursday night in Ottawa.

While there is any number of reasons for his strong play, Couture, 21, often speaks of the influence his San Jose teammates have had on his development.

“I think for any young player, being surrounded by a good group of guys, guys who are more than happy to see you succeed, is a huge plus,” said Couture, who played a portion of his minor with the 'AAA' London Junior Knights of the Minor Hockey Alliance League where he was a teammate of Los Angeles Kings' defenceman Drew Doughty. “When you first start out, you don't want to worry about feeling out of place.”

It's something Couture didn't need to concern himself with.

“Every guy on this team has been great to me,” said the forward, who played four campaigns with the Ottawa 67's of the Ontario Hockey League, from 2005-09. “I've been very fortunate to be in the position I'm in.”

Couture points to one player in particular, a former No. 1 overall pick, an offensive star who now finds himself closing in on the 1,000 games-played plateau at the NHL level.

“You really couldn't ask for a better person to know or a better guy to play with,” said Couture, of all-star forward Joe Thornton, one of hockey's premier centreman, who received the Art Ross Trophy and the Hart Memorial Trophy in his first season with the Sharks, in 2006. “With Joe, it doesn't matter if you're a rookie or a 10-year veteran, he treats everyone the same, with great respect. He wants everyone to be a success.”

And while Thornton, part of the Team Canada squad that struck gold at the 2010 Winter Olympic Games, has undoubtedly had a huge influence on Couture, the three-time OHL All-Star Game selection is hoping his style of play can make a difference in San Jose.

For Couture, it's not a case of trying to do too much, but rather in keeping things simple.

“I want to be someone that can be depended on to take care of things at both ends of the rink,” said the 6'1”, 195-pounder. “I also want to be able to chip in offensively. I suppose it's just about finding the right balance in your game. I think having the support of people makes a huge difference, too. The more comfortable you are, the more effective you can be.

“The biggest thing is to play your own game,” he continued. “It all goes back to having that desire to be better at everything.”

In spite of playing less than 50 regular season games in the NHL, Couture, who was an exceptional athlete excelling specifically in lacrosse and baseball, is already well-versed in how tight things can get in the push for a playoff spot in the Western Conference.

Getting a shot at the Stanley Cup, he knows, won't come easy.

“You take a look at the standings and you realize every game is huge,” said Couture, who appeared in 15 playoff games with the Sharks in 2009-10, scoring four goals. “If you string together a few losses, you can fall far easily. If you are able to reel off a few wins in a row, you can climb a lot higher.

“When you think about it, the eighth seed can be, in many ways, just as dangerous as the first seed. There's not that much separation from top to bottom. That's why you can't focus beyond your next game.
Each game is vital.”

As far as personal assessment is concerned, Couture, who decided at the age of 13 to drop the pursuit of baseball for the game of hockey, is reasonably pleased with how things have gone in 2010-11.

That said, his focus isn't on individual recognition.

“I suppose I'm happy with how everything has gone so far, personally, but to be honest, I only look at team success,” he offered. “We've been very inconsistent this year and we know it can't be that way. There are too many good teams in the West and only eight teams get the chance to try and make it to the Cup.”

At the very least, Couture feels comfortable in his surroundings and confident in his teammates.

“As I said before, it's a great group of guys, who have been really nice to me and helped me out at every step,” he said. “I feel very lucky to be here in San Jose.”