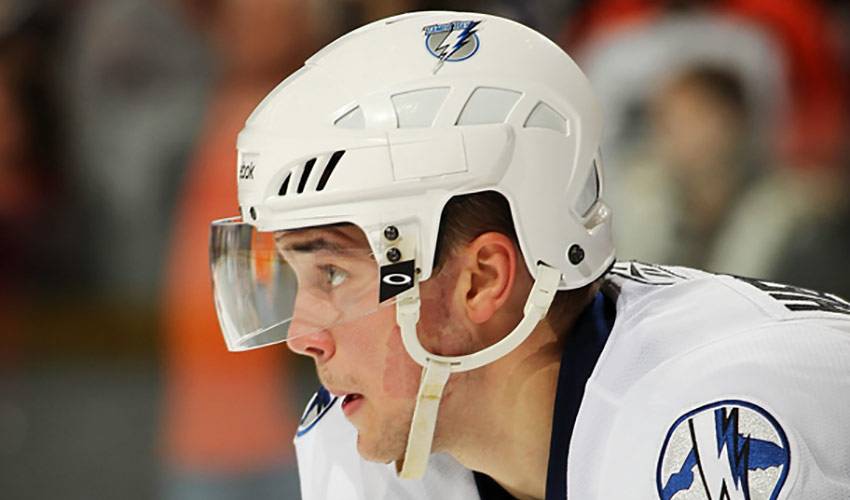 Victor Hedman, an NHL goaltender? One of hockey's best young blueliners started out stopping shots rather than taking them. His mother, however, suggested a change, one that would help land him a spot on hockey's biggest stage.

Sensing he had the opportunity to make more of an impact outside of the crease, his mother bought him a Christmas gift that would present a chance for her son to see the game from a different perspective.

“My mom wanted me to switch from goalie to playing out, so for Christmas, I got a new helmet,” recalled Hedman, who began his junior hockey career in the Swedish J20 SuperElit with the Modo Hockey organization in 2005-06. “I played a little bit of forward and a little bit of defence before I switched totally to defence.”

Hedman recorded 25 points in 34 games during his first full season in the Swedish junior ranks in 2006–07. The next year, he turned pro and joined the Elitserien with Modo at the age of 16. At the beginning of the 2008–09 season, he was ranked first overall among all draft-eligible skaters in the International Scouting Services' preliminary rankings.

That same campaign, Hedman was nominated as the Elitserien Rookie of the Year 2008–09. Following his performance at the 2009 World Junior Championships, he was listed atop the rankings of European skaters by the NHL Central Scouting Bureau.

Although it was a huge unlikelihood that Hedman would play in Russia, he was drafted 83rd overall by the Kontinental Hockey League's Spartak Moscow on June 1, 2009. Heading into the 2009 NHL Entry Draft, he was listed as the number two ranked player and top European player.

Hedman, who was selected second overall, made his NHL debut with the Lightning on October 3, 2009 against the Atlanta Thrashers. He also registered his first point, an assist, on a Martin St. Louis goal. His first NHL tally came 13 days before his 19th  birthday, on December 5, 2009 against the New York Islanders.

“It couldn't have worked out any better for me, coming here to Tampa,”said Hedman, who played for Sweden at the 2008 World Junior Championships, where he helped the team to a silver medal, losing to Team Canada 3–2 in the final, where he was also selected to the tournament All-Star Team. “The guys have all been great to me. It's not just the veteran players like Vinny (Lecavalier) and Marty (St. Louis) who are there for you. It's the young players, too. Stammer (Steven Stamkos) and all the other guys have been incredible.”

The strapping defenceman – he stands 6'6” and weighs 230 pounds – is also grateful to have fellow Swede Mattias Ohlund as a teammate, a veteran who has had a huge influence on Hedman, both on and off the ice.

“I owe Mattias Ohlund a lot of thanks for what he has done for me,” said Hedman, of the defenceman and alternate captain who signed as an unrestricted free agent with the Lightning in 2009. “He's been a good friend and really helped in a lot of ways.”

Hedman, just like Tampa teammate Simon Gagne (who was recently featured on NHLPA.com), likes what he sees in the Southeast Division club, a team that has their sights firmly set on a return to the playoffs.

“We're confident in one another,” said Hedman, Sweden's Junior of the Year and Elitserien Rookie of the Year in 2009. “Even if we are down by two goals or if we're up by two goals and lose the lead, we feel that we can still win the game. It's still early in the year, but we know what we have to do to get into the playoffs.”

On a personal level, Hedman will look to build off a solid rookie season, one that saw him score four goals and total 20 points.

While it took some time to get comfortable in his new surroundings, Hedman admits he's feeling right at home in the Sunshine State.

“Obviously, there are times when you miss your friends and family, especially at Christmas,” said Hedman. “Christmas is very big back at home. But I've got my girlfriend here and great teammates. Everything is very good.”

So when it comes to his wish list for the holidays this year, the one thing Victor Hedman won't be asking for is a new helmet or a change in position.

“No, I won't need to do that anymore,” he said with a laugh.

Does that mean he's happy that his mother stepped up and made a big decision for him as a kid?

“It worked out for the best, I'd say. I'm glad with how things turned out.”