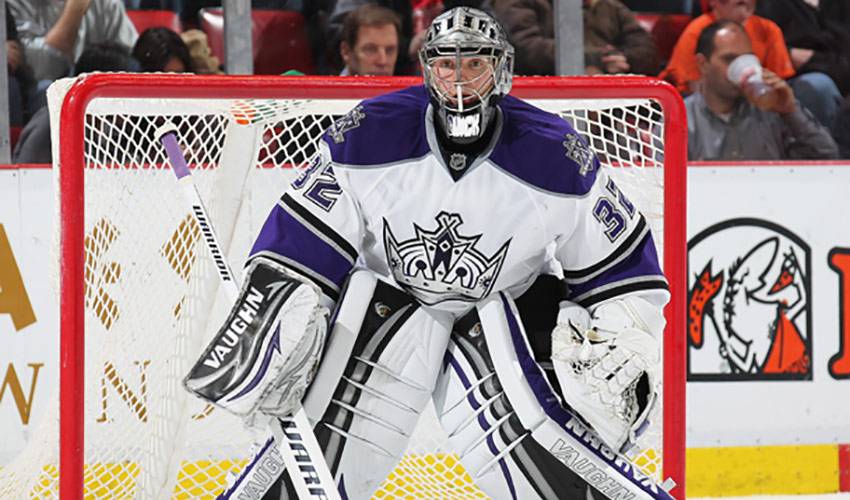 As the last line of defence, Jonathan Quick is just what the Los Angeles Kings need in a goaltender: a big-time talent that rarely gets rattled.

It was the perfect example of why the 25-year-old Quick has quickly risen to the ranks of the National Hockey League's elite backstoppers.

Holding a late 3-2 lead against state rival San Jose, the Kings were under relentless pressure from the Sharks in the waning moments. With just five seconds left on the clock, Patrick Marleau found the back of the net to send the game into overtime.

The momentum had now swung in favour of the Sharks, but Quick, the 72nd overall selection of the Kings in the 2005 NHL Entry Draft, wasn't about to throw in the towel.

“To be honest, it was disbelief when that goal went in,” recalled the Connecticut native, who launched his big-league career in 2007-08, winning his first NHL game on December 6, 2007 against the Buffalo Sabres, by an 8–2 count. “We had the win in our grasp and unfortunately, they got one late. It's definitely deflating when that happens.”

But by no means a disaster for the man between the pipes.

“You're upset it happened, but you snap out of it fast and focus on the next save,” said Quick, who earned his first career NHL shutout on December 23, 2008, defeating the Columbus Blue Jackets in Columbus, Ohio. “You can't let those things get to you at all. You just snap out of it.”

After a scoreless overtime, Quick came up big in the shootout round, making several big saves in helping the Kings earn a hard-fought victory over the Sharks.

The drama wasn't lost on Quick.

“It was a great feeling to get the win, especially so late in the season. You look at the standings and one look tells you all you need to know. It was a pretty boisterous dressing room after, as you'd expect.”

Touted as a team on the rise, the Kings got out of the starting get quickly, rising to the upper echelon of the West. And while they've been playing some of their best hockey of the campaign in recent weeks, there were a few extended losing streaks that threatened to put their season in peril.

Injuries have also decimated the Kings, including long-term ones for offensive studs Justin Williams and, just recently, Anze Kopitar.

In spite of those tough losses and past losing streaks, Quick likes what he sees when it comes to his teammates' resiliency.

“When you lose games and things aren't going as you want, it can have a really demoralizing effect on the team,” said Quick, who led his high school, Avon Old Farms, to two straight New England Prep Championships in his junior and senior seasons. “But it can also build character. And I think that's what happened for us. You take one on the chin, but you battle through it.”

Quick sees similar traits between Los Angeles and the Washington Capitals, a team that has endured a rollercoaster season, but has been one of the strongest, most consistent clubs in the league down the stretch.

“You could compare us in some ways to the Capitals,” he offered.

“They had a few slumps, but they've had good production from everyone and they are playing really solid hockey. We have a young team, but we're learning what it takes to be a contender.”

And Quick is delivering big-time in the big games, perhaps a sign that the Kings could be a major player come the playoffs.

Though he's played less than 200 games at the NHL level, the 6'1”, 200-pounder, who won a silver medal with the United States Men's Hockey Team at the 2010 Winter Olympics in Vancouver, British Columbia, Quick is on the fast track to success at hockey's top level.

Keeping his life, both on and off the ice, simple, undoubtedly has been a big factor in his winning ways.

“I try not to think too far ahead or outside of where I am,” said Quick. “When I'm with my family, my attention and my thoughts are strictly on them. When I go to the rink, that's where my sole focus is.”

Which is why a Quick fix, at least if you're a member of the Los Angeles Kings, is never a bad thing.