The inaugural Allstate All-Canadians Mentorship Cup has been handed out for the first time, with Team Spezza beating Team Schenn in a shootout by a score of 10-9 at the Hershey Centre 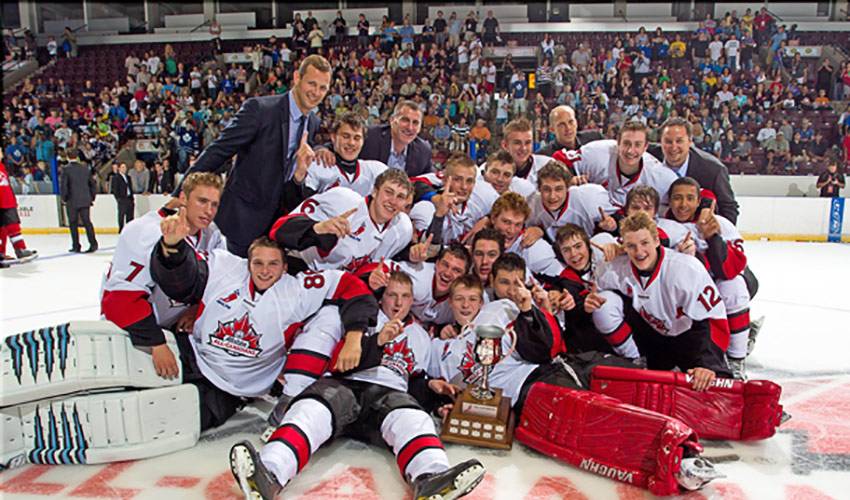 The inaugural Allstate All-Canadians Mentorship Cup has been handed out for the first time, with Team Spezza beating Team Schenn in a shootout by a score of 10-9 at the Hershey Centre in Mississauga, ON. With the trophy awarded, the week-long Allstate All-Canadians Mentorship Camp is now complete, having successfully brought together some of the country's premier bantam-age hockey talent.

""Great players on both sides, phenomenal talent,"" said Spezza, the winning coach, when asked for his impressions of the game. ""Hockey's in a good place in Canada. With the way the camp's gone, a 10-9 shootout win for us, it couldn't be scripted any better.""

The game began with a fevered pace during the first period, as the two teams combined to score eight goals, several of the gorgeous variety. Team Spezza took an early lead in the game on a goal by defenceman Roland McKeown. Team Schenn's towering and highly-touted defenceman, Aaron Ekblad quickly answered with a goal of his own, and the game was definitely on from there. Brayden Point would put Team Spezza up 2-1 with a penalty shot goal (the game was played under modified rules for penalties that allowed the choice of a two-minute minor or a penalty shot) off a nice deke on Team Schenn goalie Jordan Papirny. Team Schenn would tie the game at two shortly afterwards, off a beautiful two-on-one rush finished by forward Timothe Simard.

Robert Fabbri gave Team Schenn its first lead of the game at the 11:01 mark, which was answered 19 seconds later by Brayden Point's second goal of the period. With the game tied at three, Papriny made several spectacular saves, including a stop on a two-on-none rush that saw McKeown robbed of his second goal. Team Schenn's Daniel Audette and Team Spezza's Ty Mappin would each score before the period ended, seeing the teams leave the ice tied at four goals apiece.

Team Spezza would add two goals in the first five minutes of the second period to get the first two-goal lead of the game. Brendan Nickerson scored an early goal by Papirny, followed by a Alexis Pepin slapshot tally at the 15:26 mark to make it 6-4. Team Spezza's defenceman Joe Hicketts would make it 7-4, using a nice spin-move to find open ice inside the blue-line before walking in and firing a snap shot by Team Schenn goalie Julio Billia.

With his second goal of the game, Robert Fabbri put Team Schenn back into the game, bringing the score to 7-5. Fabbri would help create another tally moments later, passing back to Jordan Harris at the blue-line, whose shot was saved, but provided a rebound for Timothe Simard to bang home his second marker of the game. Reid Duke would complete the three-goal comeback seconds later, batting another rebound past Team Spezza goalie Keven Bouchard for Team Schenn's seventh goal to send the game into the third period tied at seven goals apiece.

The first goal of the third period came from a familiar source for Team Schenn, as Fabbri finished his hat-trick off a Ryan Gropp assist. With Team Schenn buzzing around him, goaltender Derek Mazil would keep the score at 8-7 seconds later, thwarting a tic-tac-toe attempt that left him sprawled on his back.He couldn't stop Brook Hiddinkat the 9:39 mark of the third period however, with Hiddink beating Mazil with a snapshot over his glove hand on a penalty shot to make it 9-7, Team Schenn.

With five minutes left in the third and the score the same, dramatics were needed for Team Spezza to get back into the game. Jake Virtanen would start the comeback process, making it 9-8 with a quick shot that beat Billia at the five-minute mark.

With only nine seconds left to play, following a Team Spezza timeout, McKeown dramatically tied up the game with his second goal of the game, off a mad scramble in front of the net. The native of Etobicoke, ON had only minutes earlier saved a goal against by pulling a puck off the goal line that had snuck behind Mazil.

With the game tied at the end of regulation, a shootout was needed to decide the Mentorship Cup. Brayden Point of Team Spezza led off the shootout with a goal, and was then followed in suit by teammates Jake Virtanen and Josh Ho-Sang, which kicked off a preemptive celebration. Once the confusion settled, Mazil, who was perfect in the shootout, would then stone Fabbri in a must-score situation, giving Team Spezza the first-ever Allstate All-Canadian Mentorship Cup.

The game was officiated by former NHL referee Kerry Fraser, who recently retired after a 20-plus year career that saw him officiate over 1,900 games.The shots of the game were 49-26 in favour of Team Spezza.