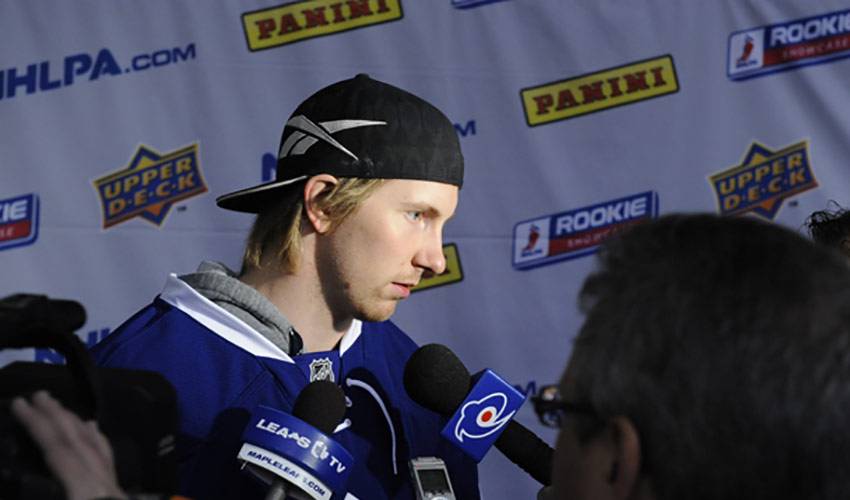 The first day of the 2011 NHLPA Showcase is almost complete, with the 26 players in attendance kicking-off their week with some autograph signing, as well as numerous interviews and photos for the NHLPA, NHL Network as well as Upper Deck and Panini.

With only Adam Larsson of the New Jersey Devils missing due to travel problems created by Hurricane Irene, the prospects had a full morning at the Westin Harbourfront Castle in downtown Toronto, located just steps from the doors of the NHLPA's offices.

The morning began with a breakfast for the players, during which some NHLPA senior staff spoke to the players about the role the union has, and will have, in their careers. The NHLPA's Chief of Business Affairs, Mike Ouellet, gave the introductory remarks, and was followed by Adam Larry, Director of Licensing, who discussed the importance of the two days to the NHLPA's sponsors. Mathieu Schneider and Rob Zamuner, former players and current members of the NHLPA staff, then spoke to the room, telling them of the role group licensing agreements, (like the ones with Upper Deck and Panini) has had over the years for the members of the NHLPA.

Following breakfast, the players got right to the task at hand, separating into three groups and heading off to the six different stations were set up around the hotel. Two of the stations were for the NHLPA; one shooting video for upcoming NHLPA.com interviews and a second for some stylized still photography shots. The NHL Network also had a video room set up, where they were capturing some one-on-one interviews of their own with the players.

EA Sports also had a station set-up, a room where they took head scan pictures of the players from all angles. These images will be used to make the video game versions of the players for next year's NHL '13. Trading card companies Panini America and Upper Deck were also in the mix, as they each had a room of their own that the players visited, to sign the autographs that will eventually make their way into packs of Panini and Upper Deck cards.

Following the completion of the stations, lunch was served, giving the players a reprieve where they could sit down and enjoy one another's company. Once lunch was over, the players headed upstairs to a room where EA Sports had six TV's set-up, each with a PlayStation3 and a copy of the yet-to-be-released NHL '12. The players all quickly matched-up against one another and got familiar with the newest version of a video game series that they have been playing their whole lives.
With a couple of hours of gaming behind them, the players had the rest of the afternoon off until they would reconvene to head over to the Rogers Centre to watch a baseball game between the Toronto Blue Jays and the Tampa Bay Rays. Some headed back to their rooms to relax, while others visited the NHLPA office and toured the city, checking out some of the sights around downtown Toronto.

The Nashville Predators' Blake Geoffrion, who used his afternoon off to go to the Hockey Hall of Fame, spoke in glowing terms when asked about his morning. “It's obviously pretty special,” Geoffrion said about the events of the day. “Your first goal is to just make the NHL, so to think that someone is going to be collecting my autograph or my rookie card, it's just crazy to think that that is even possible. I'm very honoured and very blessed.”
More to come tomorrow, following the second day of the 2011 NHLPA Rookie Showcase.