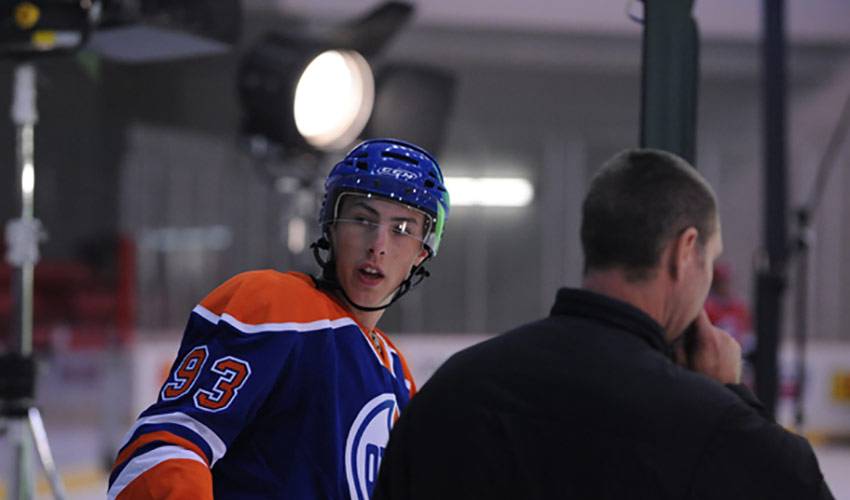 The third annual NHLPA Rookie Showcase is now in the books, with the players, trading card companies and NHLPA staff all walking away content that much was accomplished and many memories made for all involved.

The final day was an early start at the Westin Harbour Castle Hotel in downtown Toronto, with the players catching a 7:45 AM bus to the Mastercard Centre rink facility in the west-end community of Etobicoke. Upon arrival, the players were treated to a catered, on-site breakfast allowing them to fuel their bodies and trade stories from the night before, which included a trip to the Rogers Centre to take in the Toronto Blue Jays 7-3 victory over the Tampa Bay Devil Rays from a luxury suite inside the famous stadium.

Once fed and ready to start the day, the players began by making themselves available to the large contingent of media that were on-hand to cover the event and gain access to some of the best young hockey players on the planet. The flashbulbs snapped and the video lights were blinding but after an hour of fulfilling their media commitments it was time to get down to business. With Upper Deck and Panini creating some impressive stations and photo scenarios, it was time to get serious in front of the cameras of the two hockey card companies, with the players serving as the focal point for the wide variety of shots. Four stations in total were set up for the rookies to cycle through, two on-ice and two off-ice. Upper Deck added a new wrinkle to their set-up this year, using a massive green-screen that will be used to incorporate video into a special edition of cards.

After three years of doing the event, the major stakeholders were as happy as ever at the conclusion of the day, all echoing a similar message.

""We're very pleased with how it's gone in its third year,” said Adam Larry, the NHLPA's director of licensing. “Just another great crop of young players taking part in the 2011 NHLPA Rookie Showcase. We're already looking forward to the fourth year.""

Mark Warsop of Panini America was equally happy, having gotten many great pictures over the two days, as well as 40,000 autographs on cards and patches from the 26 players. ”We're really looking forward to coming back next year,” said Warsop. “Maybe there'll be a little bit of tweaking , maybe add a few things to inject as a new wrinkle, but the way it's gone this year was pretty good.”

“It's fantastic,” said Josh Zusman, Hockey Brand Manager for Upper Deck, “it's something we look forward to the entire year. Obviously, rookie cards are a huge part of our business and establishing the Rookie Showcase two years ago was really a great way to help us kickstart the season.Knowing that this crop of players is going to headline our rookie collection is very exciting to us.

The three-day event wraps on Tuesday evening as the players, stakeholders and NHLPA staff will gather for a celebratory dinner and social event in a downtown Toronto restaurant. There will undoubtedly be some smiles and pats on the back for this years' success, as well as conversations on how to continue to make this a can't miss event on the late summer hockey calendar.