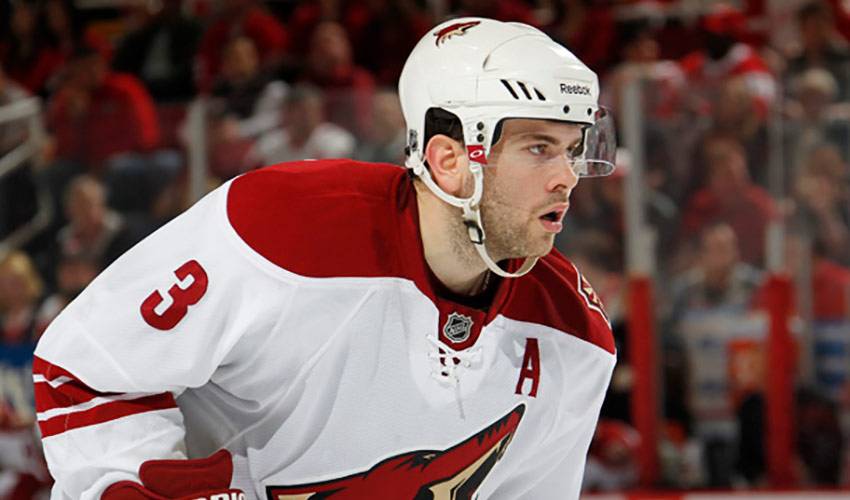 is a smash hit for the Phoenix Coyotes.Keith YandleHis batting practice experience at a historic baseball stadium didn't yield a home run, but there's no denying

A lifelong fan of Major League Baseball's Boston Red Sox, Yandle, a proud Bostonian himself, wasn't close on the five or six attempts he had to knock one out of Fenway Park during the NHL off-season, but it didn't damper the defenceman's enthusiasm for the unique opportunity.

“I was lucky enough to get a chance to go on the field and taking batting practice with my dad,” recalledYandle, who has risen to the ranks of the league's topblueliners. “I wish I could hit one over the fence, but I didn't quite get it there. I did get to meet a lot of the Red Sox players and to be out there, hitting balls at Fenway, it's an experience I won't ever forget.”

He's hoping he'll have even more to reminisce about at the end of the 2011-12 NHL season.

“I think all of us are ready to get things started,” said Yandle, who played for the Moncton Wildcats of the Quebec Major Junior Hockey League (QMJHL), appearing in 66 games in 2005–06, when he tallied 25 goals and 59 assists for 84 points. “We aren't a flashy team and we don't have the star power that other teams might have, but collectively, we are a hard-working team, one that comes to play every shift.”

The Coyotes made it to the playoffs for the second consecutive campaign in 2010-11, but were ousted in the first round, once again by the Detroit Red Wings.

And while nailing down a playoff spot in the Western Conference is hardly a slam dunk, Yandle, who was part of the Moncton squad that won the QMJHL championship (he took home the league's Emile Bouchard Trophy as best defenceman), doesn't see any reason why Phoenix can't make inroads towards a legitimate shot at the Stanley Cup.

Playing on a team that has garnered a reputation as one of the toughest teams to play in the league is something Yandle takes great pride in.{{QUOTE}}

“That's exactly what we want to be and I think that's what we've achieved over the past few seasons,” said the 105th overall selection of the Coyotes in the 2005 NHL Entry Draft. “And that's the way we need to approach the games. Our division is extremely strong and there are just no easy games when you're playing against San Jose, Los Angeles, Anaheim and Dallas. But that said, I don't think there are any easy games throughout the entire league.”

Which is exactly why Yandle and his teammates are looking to assert themselves early on in the season.

“If we can play in the system that ‘Tip' (head coach Dave Tippet) has set out for us and we can play consistent hockey from the start, we feel good about our chances. We've been to the playoffs the past two seasons and we'd like to build on that. Our team knows that in order for us to win, everyone has to contribute something key in each game. And we've got players that can do that.”

Yandle, who appeared in his first NHL game on October 11, 2006 against the Detroit Red Wings and logged 20 minutes of ice time, is ready to play his part.

Last season, the 195-pounder, who skated in his first playoff game on April 14, 2010, scoring the first goal against the Red Wings to tie the game at 1-1, while adding an assist to be named one of the game's three stars, was at the top of his game, reinforcing his reputation as a top-tier defenceman.

He scored 11 goals and had 59 points, while once again playing in all 82 regular season games.

“When I look back, I guess I was happy with the consistency in my game,” said Yandle, one of the team's alternate captains, who played in the 2011 NHL All-Star Game. “You always strive to have that balance between adding some offence and being strong defensively. There's always room for improvement. Every player wants to continue to work at their game.”

And while his baseball swings at Fenway didn'tmoment, Yandle, who is now the proud father of a baby girl, shouldn't worry too much.

After all, when it comes to hockey, there's no denying he's always on his game.