Hecht The Man From Mannheim 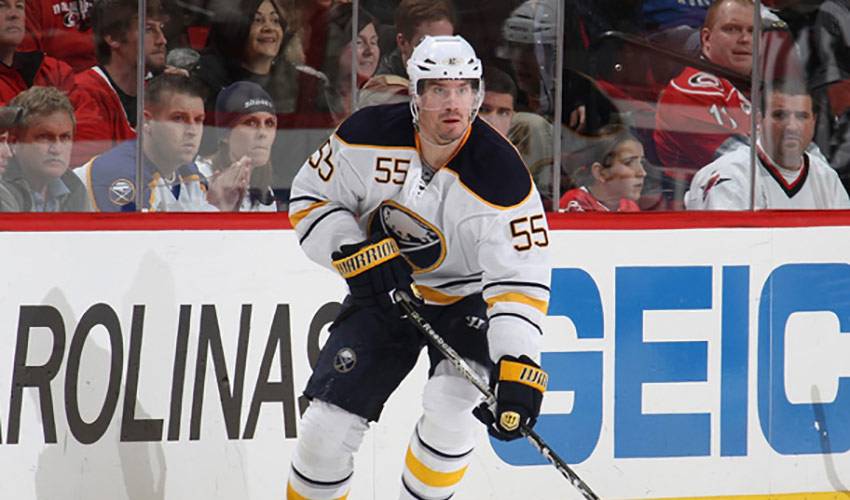 never expected to happen in his hockey career, including playing a game in front of his hometown fans in Germany.Jochen HechtThere are plenty of things

“It still has sunk in yet.”

That's exactly how Hecht, about to enter his ninth season as a member of the Buffalo Sabres, describes how he's feeling about the upcoming exhibition game that will take place in Mannheim, Germany.

And while he is currently battling a concussion that he sustained early in training camp and is unsure if he will ultimately be able to suit-up for the Sabres against his former club, Hecht is staying positive and working as hard as he can to find himself clear of symptoms and able to return to the line-up.

The Sabres will face-off against Adler Mannheim at SAP Arena Tuesday, October 4, as part of the 2011 NHL Premiere Challenge.

Did Hecht ever think he'd see the day he'd make this type of return home?

“Never,” said the 49th overall selection of the St. Louis Blues in 1995. “I played four years for Mannheim and then one year during the lockout. I go home and do training camp with the team in August. To have  a chance to play in front of the home crowd, in front of my family and friends, would be something hard to believe.”

Hecht, who played two full campaigns for the Blues, compiling 32 goals and 46 assists before being dealt, along with Marty Reasoner and Jan Horá?ek, to the Edmonton Oilers for Doug Weight and Michel Riesen on July 1, 2001, is looking forward to the unique opportunity.

“I'm not nervous at all,” said Hecht earlier this summer when speaking to NHLPA.com, who was traded to the Buffalo Sabres in exchange for the 31st and 36th picks in the 2002 NHL Entry Draft. “Obviously, I want to play a good game. I'm looking forward to it and I'm going to try and enjoy it.”

It's not the first time NHLPA members have made the trek to Mannheim. {{QUOTE}}

Last year, Adler Mannheim took on the San Jose Sharks in the Premiere Challenge. Leading 1-0 late in the third period, Mannheim surrendered the lead, but came back to knot the game at 2-2 with 3:11 remaining to force overtime and eventually a shootout that saw the Sharks prevail 3-2.

“A few of the guys on the team have asked me what it will be like to play in Germany,” acknowledged the 34-year-old, who was chosen as the captain for the month of October 2007 and later during February 2008, becoming the second German-born player to captain an NHL team (Walt Tkaczuk was the first). “Some of the guys have been over to play in the World Championships, so they know what it will be like. There's a lot of singing and dancing throughout the game. The fans really enjoy it.”

So, too, does Hecht, who appeared in four games with Team Germany at the 2002 Winter Olympics in Salt Lake City, Utah, where he scored a goal and an assist as Germany finished eighth.

“To be able to play this game for so long, to make it to the NHL and to play against top players, it's been a dream come true,” he offered. “I've been lucky enough to win the President's Trophy twice, to go to the semifinals, and to experience a lot of great things.”

Hecht is hoping that his biggest thrill is still to come.

“It would be great to win the Stanley Cup, that's what everyone plays for,” he said.

The Anaheim Ducks and Buffalo will play Friday, October 7 at Hartwall Arena in Helsinki, Finland. The next day, the Sabres and the Los Angeles Kings will play at O2 World Arena in Berlin, Germany.

While the venues might be different than what Hecht and his teammates are used to, the bottom line remains very much the same.

“Last year, we were a team that was looking to make the playoffs,” noted the Sabres' alternate captain. “This year, it's different. We're looked upon as being one of the favourites to win the Cup. It's important for us to start it off right.”

Including a game that might not be worth two points in the standings, but is still a dream come true for Hecht. “I have so many great memories of home and to be able to go back and have the Sabres play a game there is really special. I can honestly say I never expected for this to happen, but I'm certainly glad it did.”

You can bet there are thousands of German hockey fans who couldn't agree more.