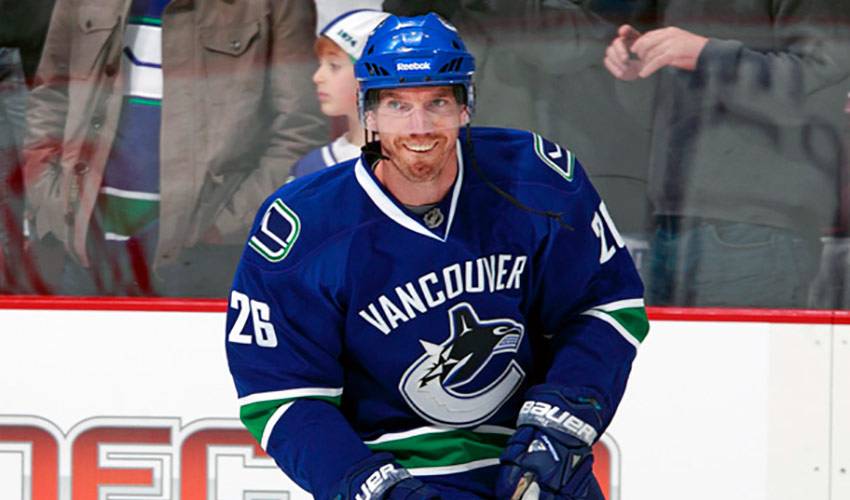 has already put in plenty of overtime preparing for the upcoming campaign.Mikael SamuelssonThe 2011-12 NHL regular season hasn't yet begun, but

It was hardly the way he had anticipated his year coming to an end.

In Game Five of Vancouver's second round playoff set against Nashville, Samuelsson fell to the ice while attempting to retrieve a loose puck. Twelve days later, on May 19, he underwent surgery for his adductor tendon and a sports hernia, sidelining him for the remainder of the post-season.

The Canucks would ultimately lose the Stanley Cup in seven games to the Boston Bruins, furthering the disappointment for Samuelsson.

But rather than bemoan his situation, the 34-year-old forward decided to use the summer months, spent in his native Sweden, to work tirelessly to get back in game shape for the upcoming season.

“It was a good summer,” said Samuelsson, who began his career in Sweden, starting with Södertälje SK as a junior in 1994, going on to also play for Swedish teams IK Nyköping, Frölunda HC and Brynäs IF, selected145th overall in the 1998 NHL Entry Draft by the San Jose Sharks. “There was a lot of rehab, but I knew that's the way it was going to be. I'd start my rehab sessions early in the morning and go until noon. I want to come back strong and that was my focus.”

What was going through his during his intense rehab sessions?

“I wasn't thinking about too much, really,” said Samuelsson, who joined the NHL ranks in 2000-01. “I guess I thought that I'm getting up there a little bit in terms of age, but I still believe I can contribute. I feel great and that I'm back to being myself.”

That would be a very good thing for the Canucks as they will soon start their quest to bring the franchise its first championship.

Samuelsson, who had stints with the Sharks, New York Rangers, Pittsburgh Penguins and Florida Panthers, returning to Europe during the 2004–05 NHL lockout, understands the disappointment of losing a hard-fought final, but he also believes Vancouver has the pieces in place to win it all.

“It's a good-bad type of thing when you lose the championship,” offered Samuelsson, who signed with the Detroit Red Wings after the lockout, winning the Stanley Cup with the club in 2008. “Obviously, you hate to lose and in the final game. But to get to the finals and beat some very good teams, that's something we can use heading into this season. We pretty much have the same group of guys and we all want to win the Cup. We aren't satisfied with how our season ended.”{{QUOTE}}

For his part, Samuelsson, who, after four campaigns with Red Wings, signed with the Canucks in 2009, is hoping to get off to quick start in 2011-12.

“I'm very excited to get back out there and to do positive things,” said Samuelsson, who is a member of the Triple Gold Club (Stanley Cup championship, Olympic gold medal with the Swedish national team at the 2006 Winter Olympics and gold medal at the 2006 World Championships). “I've felt great so far and I hope that continues.”

So, it was only fitting on this day when he spoke withNHLPA.com, Samuelsson was at a hockey rink, but on this occasion, only as an interested observer.

“I'm watching my son, William, practice,” said the veteran of 615 NHL regular season games. “He's six and he loves to play. He's playing for the Vancouver Thunderbirds. And I like coming to see him practice. Right now, there are six coaches on the ice and they are teaching all kinds of different things. That's good tosee.”

Is he on the fast track to being a better player than his father?

“Not yet, but probably soon,” quipped Samuelsson.

And who knows, perhaps the younger Samuelsson will one day skate in NHL arenas, something Mikael didn't always figure on.

He'd be that much happier if Vancouver made 2011-12 the most memorable one in Canucks' history.

“That would be great. We have a very focused group of guys and everyone would love to get the chance to win itall.”

Including Mikael Samuelsson, whose summer of hard work could net him his most prosperous season yet.