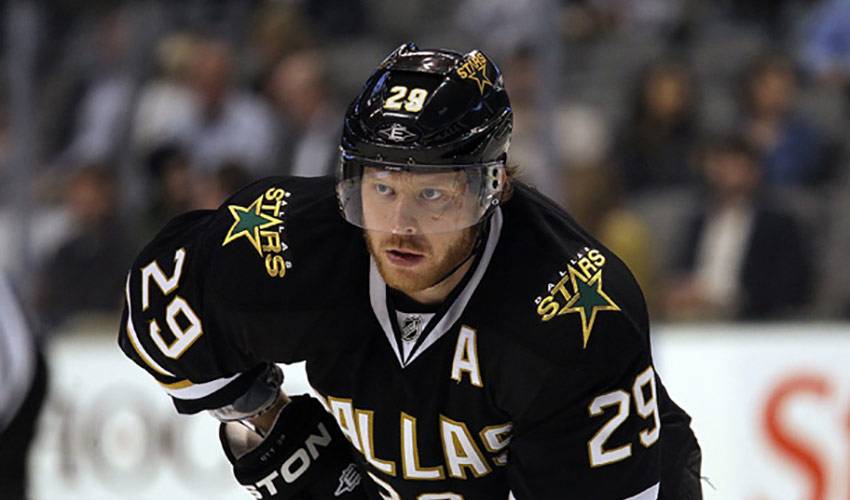 and his Dallas teammates aren't waiting until the 2011-12 NHL regular season to put on their game faces.Steve Ott

Three consecutive campaigns of no playoff appearances, coupled with missing out on a post-season berth in the last game of the 2010-11 regular season, hasn't had a devastating effect on the Dallas Stars.

In fact, it's quite the opposite, according to one of their veteran forwards.

“You see guys fighting for jobs in camp, everyone looking solid and focused on the season ahead,” said the alternate captain who enters 2011-12 eight games shy of 500 for his NHL career. “Building that early chemistry is so key, creating that bond as a group. We were all here two weeks early, which I'm sure a lot of other teams have done, which shows the commitment to want to make this year a good one.”

Ott, a first-round selection of the Dallas Stars, 25th overall at the 2000 NHL Entry Draft, who played junior hockey for the Ontario Hockey League (OHL)'s Windsor Spitfires and had a brief spell with the Utah Grizzlies of the American Hockey League (AHL), is eager to erase last year's disappointing finish.

“You look back and realize we were just one period away from getting into the playoffs,” said Ott, who joined the Stars NHL roster in 2002-03. “Those extra points that we let slip away, we know that can't happen again. You can't take any game or any situation for granted. The games that you lose in October can go a long way in determining whether you make it or not. You need to pick up points whenever you have the chance.”{{QUOTE}}

Having not made the playoffs for three consecutive campaigns is something that doesn't sit well with Ott, who scored his first NHL career hat trick at home against the San Jose Sharks on March 31, 2010.

The 29-year-old centreman is buoyed by what he sees in the makeup of the Dallas roster.

“There have been a lot of different guys who have looked really sharp so far,” said Ott, who was born in Summerside, Prince Edward, but moved with his family to the village of Stoney Point, Ontario, in the Windsor area. “You really get the sense that everyone is on the same page. It's been three years that we've been out of the playoffs. In Dallas, there's been a winning tradition and we want to get back to that. There's added pressure, but it's great pressure.

“We're hungry as a team. And I really believe with what we have, we're going to be a tough team to play against. We know that in order to make it to the playoffs, you have to be ready for all 82 games.”

And Ott, who has 34 NHL playoff games to his name, is relishing the opportunity to be a leader for the Stars.

“It's amazing,” offered Ott, of his 492 regular season games. “Where did the time go? But to be in the situation I'm in, I couldn't ask for anything better. I feel great and hopefully, there's a lot of time left for me to play.

“I've been very fortunate to have learned about this game from some of the top veterans to have played in this league,” continued Ott, who, during the 2004-05 NHL lockout, played for the Hamilton Bulldogs of the American Hockey League where he set a team record for penalty minutes in a season, notching 279. “It's truly been ideal. When I started, Bill Guerin took me under his wing. He pushed me to be a better player.”

Guerin wasn't the only one to play a big part in Ott's career.

“It's been a natural transition to take on a leadership role,” offered Ott, who was part of the Team Canada entry at the 2001 World Junior Hockey Championship that took home the bronze medal. “Brenden Morrow showed what it's like to be a player when you're on the road. Marty Turco was also someone I learned a lot from. You take those bits and pieces, the great advice, and you incorporate that into your own leadership style.”

Helping lead the Stars to another Stanley Cup championship is high on Ott's list.

“Every year, it seems to get tougher to get into the playoffs,” said the 6'0”, 200-pounder. “But we have four solid lines and that hunger to get back into the playoffs. Once you get there, anything can happen.”

Having Steve Ott on your side certainly doesn't hurt your chances either.