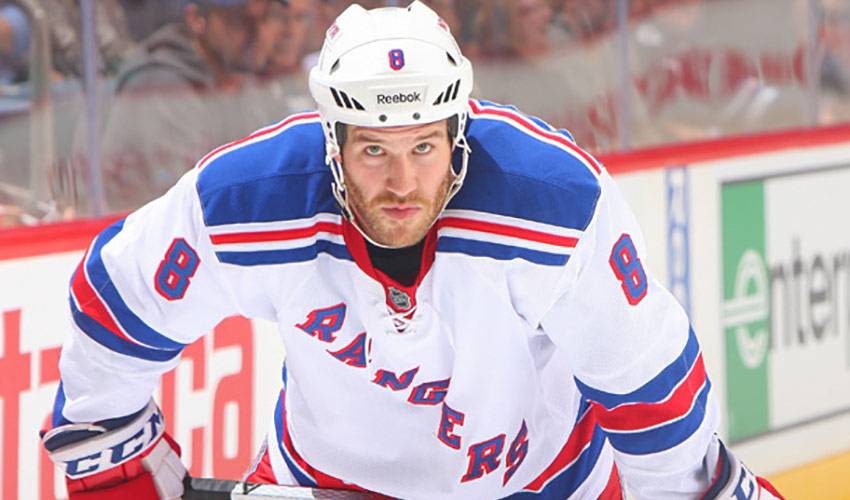 first NHL game was very much indicative of how he has approached every shift in his career since: full-out and no fear.Brandon Prust's

It was just over five years ago when Prust, then with the Calgary Flames, the team that selected him 70th overall in the 2004 NHL Entry Draft, made his big-league debut, facing off against the Detroit Red Wings.

Prust certainly made his presence known.

“It was a great way to start your career,” Prust told NHLPA.com on his way home from a recent morning practice. “You get to go up against the Detroit Red Wings, who are just loaded with these big names you're familiar with. I look around and there's Nicklas Lidstrom, Pavel Datsyuk, Henrik Zetterberg, Chris Chelios and Dominik Hasek is in net.”

Detroit players definitely knew Prust well after he skated in his first shift.

“I whacked away at Hasek,” laughed the London, Ontario native. “Then Chris Chelios came over and grabbed me. A scrum ensued after that.”

Was Prust looking to make a point?{{QUOTE}}

“I suppose I was,” said Prust, whose three years with his hometown London Knights of the Ontario Hockey League were capped with the club's remarkable Memorial Cup Championship in 2005. “But I didn't mind it at all. To be able to have your first game come against one of hockey's most storied teams, it was a great night.”

Not much has changed for Prust, with the exception of the jerseys he has worn since then.

These days, the forward, who was traded to the Phoenix Coyotes as part of a package of players and draft picks that saw the Flames acquire Olli Jokinen (in an interesting twist Prust was sent back to Calgary in exchange for Jim Vandermeer in the summer of 2009), is playing the same brand of hockey with the New York Rangers.

Prust, who was traded with Jokinen to the New York Rangers in exchange for Ales Kotalik and Christopher Higgins on February 2, 2010, has become a revered teammate and fan favourite for his aggressive, physical style.

But, as he proved last season, he can also contribute offensively, scoring 13 goals and finishing the campaign with 29 points, appearing in all 82 games.

Heading into 2011-12, he had skated in 197 regular season games, but only five playoff games. Prust is hoping to see that number rise.

“Once the season gets underway, everything just seems to go so quickly,” said the 6'0”, 195-pound left-winger. “We're almost at Christmas, but the games are important. I like what we have here.”

Do the Rangers have what it takes to contest for the Stanley Cup?

“For sure,” offered Prust, who was the 2011 Steven McDonald Extra Effort Award recipient as the ‘Rangers player that goes above and beyond the call of duty.' “I think we're starting to prove that. There's still a lot of work to do and we still need to gel as a team, but I think there are better things on the horizon for us. We are constantly doing everything we can to improve.”

“The coaching staff is great and has put a solid plan in place,” he continued. “We have so many players that have that workmanlike mentality and are more than willing to sacrifice their bodies and do that so-called dirty work to help us get a win. And we also have skill, too. Hopefully, it all comes together for us.”

Prust is grateful it's worked out well for him.

“When I was young kid, I loved going to the London Knights games,” recalled Prust. “I was a huge fan. I also was a huge Toronto Maple Leafs fan. Like any kid, I dreamed of playing in the NHL. I remember one time I got to meet (former Leafs and NHL greats) Wendel Clark and Doug Gilmour, two big idols of mine. Meeting them just made me want to be an NHL player even more.”

And now, the man who once used to love playing goaltender during road hockey games (his favourite Christmas gift was a pair of road hockey pads), is hoping to find team success on Broadway.

“You have to be ready to play every game,” noted Prust. “You can't hold back anything.”

Brandon Prust has managed to do that right from the moment he took his very first shift.