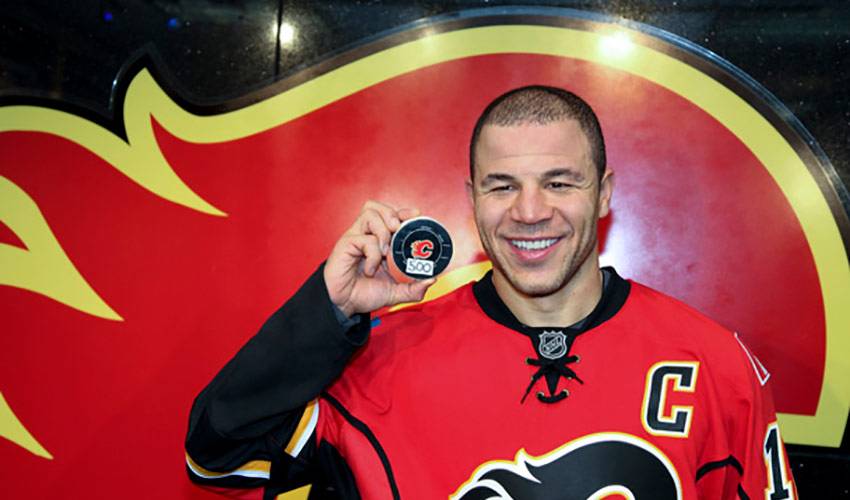 It won't be remembered as the prettiest one of his career, but Jarome Iginla's 500th goal will always be special for the player,  his teammates and the Calgary Flames' faithful.

His well-intended set-up, however, wound up hitting off two skates before deflecting past the Wild goaltender for the milestone tally, one that brought the Saddledome crowd to their feet and Iginla's teammates onto the ice.

For Glencross, who has once again been one of Calgary's key performers in 2011-12, seeing Iginla reach 500 goals was a genuine thrill.

“The one thing that's always struck me about Jarome is how he is able to put himself in the perfect spot to score,” said Glencross, of the future Hall of Famer, who ranks third among active goal-scoring leaders, with Jaromir Jagr and Teemu Selanne ahead of him. “He just finds that place to give himself great opportunities.”{{QUOTE}}

A six-time NHL All-Star, Iginla is the Flames' all-time leader in goals, points, and games played. Handed the Calgary captaincy at the start of the 2003–04 season, the Edmonton native has been one of the game's most consistent scorers and respected leaders.

Selected 11th overall by the Dallas Stars in the 1995 NHL Entry Draft, but dealt to Calgary, where he has played his entire professional career with the Flames, Iginla topped the NHL in goals and points in 2001–02, and won the Ted Lindsay Award as the most outstanding player in the league that season, as voted by the players.

In 2003–04, Iginla once again led the league in goals while leading the Flames to the Stanley Cup Finals, where he led all players in post-season scoring. He scored 50 goals in a season for a second time in 2007–08, and was the 10th player in league history to score 30 goals in 10 consecutive campaigns.

His efforts with Team Canada have been equally impressive, including gold medals at the 2002 and 2010 Winter Olympics.

For those who know him best, it's not only what Iginla does on the ice that deserves attention and adulation.

“His commitment to the city, the fans and the community is amazing,” praised Glencross, who will be featured on NHLPA.com in the coming days. “He has a strong connection to the people here and they are grateful for that relationship. Jarome is the epitome of professional. He works just as hard on the ice as he does off it.”

Since 2002, he has operated the Jarome Iginla Hockey School in Calgary as a non-profit organization, donating proceeds to the Diabetes Research Association. He was honoured with the 2004 NHL Foundation Player Award for his community service and the King Clancy Memorial Trophy in recognition of his humanitarian contributions.

“He's very genuine in what he does,” said Glencross. “He's been so good for such a long time, a power forward that wants to win and has a great passion for the game.”

At just 34, Iginla isn't thinking about hanging up his skates. But rarely a day goes by where he doesn't think about the good fortune he's enjoyed over the years.

“I really have been very blessed to get to play in Calgary and love it,” said Iginla. “Over the years, when I got into the league, I got a great opportunity to play as a young guy in key situations and to try to get better and gain some experience.”

A devoted husband and father, Iginla is as competitive as ever. These days, though, tough losses don't take as much of an emotional toll as they once did.

“At times during hockey, I know myself, you get so wrapped up in it, you squeeze your stick a little too much, all those things, or you're too focused. I just think it helps you put things in perspective, enjoy your time at the rink, enjoy the game. Things go so fast. I think it really does just help you not put so much pressure, focus, just relax when I come to the rink, try to work as hard as I can, kind of leave it there.

And so is Calgary's crowd-pleasing charismatic captain.