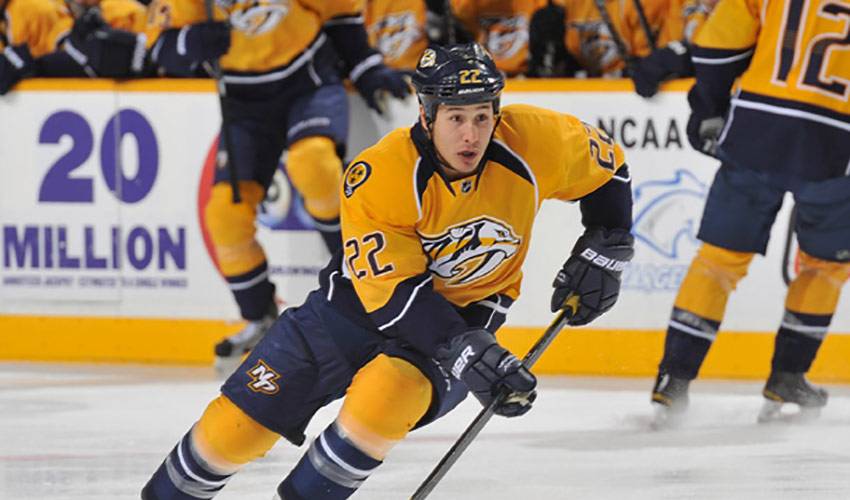 How do you follow up an impressive playoff performance in 2010-11? For Jordin Tootoo, it's come in the form of an equally strong showing in the 2011-12 NHL regular season.

After scoring one goal, along with six points and utilizing his trademark physical style over 12 post-season games for the Nashville Predators in last year, Tootoo, drawing closer to the 500 games of NHL service, made sure he kept the momentum going into the current campaign.

“When I came into training camp this year, I was focused and ready to step up my game,” said the 98th overall selection of the Predators in 2001. “I was committed to taking certain steps to be a professional away from the game and that's one area I really worked on. I've had to deal with different situations throughout my career and I came in to camp in the right state of mind.”

The end result has been one of Tootoo's best seasons since he started his NHL career on October 9, 2003, the night he became the first player of Inuit descent to play in a regular season NHL game.

He's already surpassed his previous best mark for points in a season of 18, while contributing solid play in both the offensive and defensive zones.{{QUOTE}}

Tootoo, who got his first NHL point with an assist against the St. Louis Blues on October 16, 2003 and scored his first NHL goal against the Atlanta Thrashers seven days later, might have revved up his game, but that's the opposite of how he's viewing his time on the ice.

“The game seems to have slowed down a second for me, where I'm more aware than ever of what's going, what's unfolding and what's happening out there,” said Tootoo, who scored his first playoff goal on April 10, 2008, against the Detroit Red Wings in the second period of Game 1 of the 2008 Western Conference Quarter Finals in a 3-1 loss. “It's totally different for me now. I guess you can say that it's been long time coming, but I'm embracing everything. I just want to contribute to the team.”

For the 28-year-old, preparation begins long before the drop of the puck.

“It all starts in practice for me,” said Tootoo, who played for the Brandon Wheat Kings of the Western Hockey League (WHL) from 1999 to 2003. “I want to take what I do from there and be ready for any situation that comes up in a game. I want to work on my two on one skills, skating, everything.”

Tootoo has reaped the rewards of his commitment, part of a Nashville squad eager to go further than they did in last year's playoffs, losing in six games to the Vancouver Canucks in the Western Conference semifinals.

“We're hungry to go deeper,” said the right winger, who has appeared in 36 NHL post-season games. “But we are taking it one game at a time. We enjoy the wins because life is a lot more exciting when you're playing well, but you also look at the standings and realize that a few losses can take you from fifth spot and put you in twelfth.

“We're a group that has bought into the system the coaching staff has given us. We play as a group and we don't depend on one person to make a difference. That's our philosophy when we suit up for games. We know there will be ups and downs, but we're ready to deal with whatever we have to. Every game is a playoff game for us and I like that.”

For Tootoo, he takes none of them for granted.

“It's an honour and there's a lot of a pride for me to put that jersey on every night,” said Tootoo, who has 10 playoff points. “What the team and my teammates have done for me both personally and professionally, I'm very grateful.”

He's also more confident in his abilities than ever before.

“That's huge and that's how I feel,” offered Tootoo. “When I go out there, I'm ready to play. It's nice to get points, but it's even more rewarding when the team gets those valuable two points. I'm happy with how things have gone for us. I hope it gets even better.”

With Tootoo on top of his game, there's every reason to believe it will.