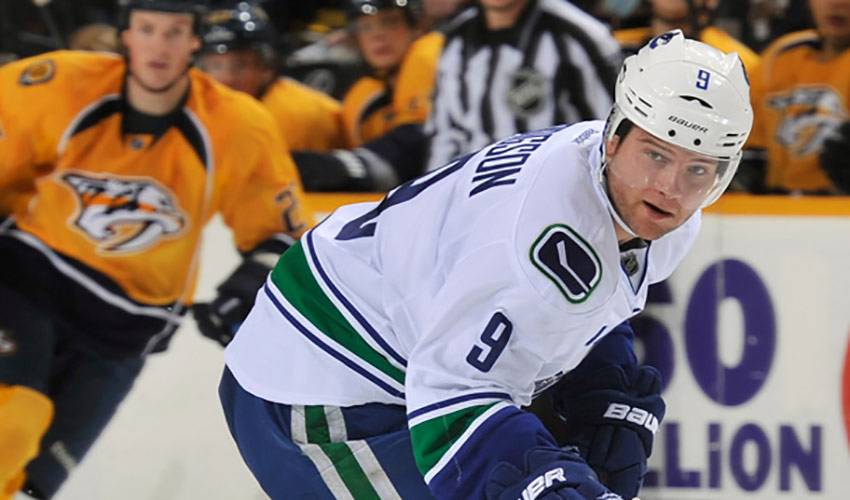 With his 22nd birthday on the horizon in mid-February, you can bet when Vancouver's Cody Hodgson blows out the candles on his cake, he'll wish for the rest of the hockey months to be just like January.

Fresh off a month in which he led all rookies in scoring with 10 points, courtesy of six goals and four assists in 11 games, along with a nod as the leagues' Rookie of the Month recipient, Hodgson is looking for even loftier goals in the days and months ahead.

But, at least for a moment or two, he doesn't mind being reminded about his impressive January.

“Obviously, I was really happy to contribute, but to end off the month with three wins, all hard-fought ones, was what made it really special,” said Hodgson, selected by the Canucks in the first round (10th overall) in the 2008 NHL Entry Draft. “It's a good feeling when you are able to create some chances that go towards getting two points.”

The Toronto native netted the game-winning goal as part of multiple-point efforts in triumphs over the Boston Bruins (4-3, January 7) and San Jose Sharks (4-3, January 21). He ended the month by scoring the game-tying goal on a breakaway in the third period of a 3-2 overtime victory over the Chicago Blackhawks on January 31.

Hodgson is the highest-scoring Canucks rookie since 2000-01, when Daniel and Henrik Sedin compiled 34 and 29 points, respectively.

“When you hear that, it's something that truly makes your day,” offered Hodgson, who played for the Brampton Battalion of the Ontario Hockey League, winning the William Hanley Trophy (OHL's most sportsmanlike player), Red Tilson Trophy (OHL player of the year) and the CHL Player of the Year Award, as well as First Team All-Star honours for the 2008–09 season. “A major reason I was able to have a good month was because of my teammates. They've always given me confidence and a belief in myself.”

Hodgson, who made his NHL debut on February 1, 2011, in a 4–1 win against the Dallas Stars, netting his first NHL goal in a 6–0 win against the Phoenix Coyotes the following day, is seeking to keep the good times rolling.

“The one thing you always hope for when you get into that rhythm is that you just keep an even keel and maintain your focus,” said the forward, who was chosen to be the city of Markham's (southwestern Ontario) official torchbearer for the 2010 Winter Olympics in Vancouver. “I think the more you remember what worked well, the more of a positive impact it can have on your game.”

His confidence, not surprisingly, is at an all-time high.

“When you have the support of your teammates, on and off the ice, it goes a long way in how comfortable you are during games,” said Hodgson, who has skated for Canada at two International Ice Hockey Federation (IIHF) events, winning gold and leading tournament scoring at the 2008 IIHF World U18 Championships and 2009 World Junior Ice Hockey Championships. “I'm lucky to be in the position I'm in, to have a great group of guys to play with.”

A group that is eager to get another shot at bringing the Canucks' organization its first Stanley Cup, after losing in seven games to the Boston Bruins in 2010-11.

“Everyone is focused on doing whatever it takes to get back to the finals,” said Hodgson, who joined Edmonton Oilers forward Ryan Nugent-Hopkins (October and November) and New Jersey Devils forward Adam Henrique (December) as Rookie of the Month award winners this season. “There are still plenty of meaningful games left to play before then and we have to be ready to play each and every night.”

Another month like January, for the team and Hodgson, would suit him just fine.

It's a blueprint for success that's working wonders for Vancouver's rookie on the rise.