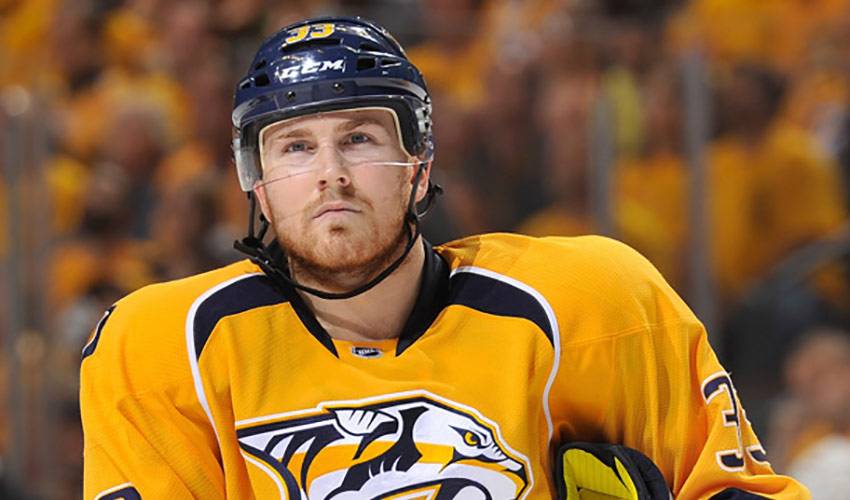 A tough ending to the 2010-11 season didn't derail Colin Wilson's desire to make an impact with the Nashville Predators. All it did was make him stronger and more committed than ever.

It certainly wasn't what he had anticipated when last year's playoffs got underway. Appearing in just three games, Wilson, the seventh overall selection of the Predators in 2008, was a healthy scratch on most nights.

“To be honest, it bothered me a lot and I thought about it quite a bit throughout the summer,” said the 23-year-old, who scored 16 goals and had 34 points while appearing in all 82 regular season games in 2010-11. “It stayed in my mind.”

The player who was awarded New England's college hockey Rookie of the Year, as well as Hockey East Rookie of the Year in 2007-08, didn't sulk or hang his head. Instead, he devised a strategy to get back on track.

“I spoke with a sports psychologist to discuss my thought process before and after games,” offered Wilson, who led Boston University in points (55) in 2008-09, his sophomore season with the Terriers. “I wanted to look into that aspect of my career. There were times where I'd be wondering, ‘What will happen if I don't score?' I'd be concerned about the repercussions of having a tough stretch of games.”{{QUOTE}}

Its obvious Wilson's conversations with the sports psychologist have helped his game, before, during and after the puck drops.

This season, he's found the consistency he strived for, playing meaningful minutes and contributing on the scoresheet.

“That's what it's all about…going out there, giving it your best and enjoying it”

said Wilson, part of the Terriers squad that won the NCAA National Championship in 2009. “I'm very happy the way we are playing as a team and personally, I'm happy that I've been consistent. There was about a four-game lapse where I had a rough go, but I was able to work through it.”

He also had his teammates in his corner, including defenceman Ryan Suter, one of the top two-way blueliners in the league.

“Ryan, who is my roommate on the road, talked to me and told me how he went through a similar situation in his first NHL playoff experience,” offered Wilson, of Nashville's alternate captain. “He'd been there before and just let me know that it will only get better from that point. When you look at what he's done, he's had a great career.”

The most rewarding aspect of this season for Wilson is in seeing the Predators keeping pace with the league's most heralded teams.

“I'm very happy about the team succeeding and being able to contribute to that,” said Wilson, who notched the game-winning goal in a recent 3-2 road win against Western Conference rival Dallas. “We're playing the top teams and doing well. We've been playing playoff-type hockey for a long time. We know we can count on our defencemen and our goaltending. We want to show that we can do our part to score.”

Wilson has done his part, closing in on his point and goal totals from last year. He's also been strong defensively.

“I'm just happy with how things have turned out,” said Wilson. “I worked hard to be prepared this year. Having those conversations with the sports psychologist really helped me a lot.”

While he had plenty on his mind heading into the current campaign, Wilson, who played for Team USA at the 2008 World Juniors, where he tied for the most goals with six, isn't overthinking things these days.

Instead, Wilson, who was born in Greenwich, Connecticut, but raised in Winnipeg, Manitoba, is skating with a clear mind and a renewed confidence.

“Just like anything, sometimes you just need to take a step back and find a way to get back into a groove,” offered Wilson. “Things are going well this year.”

And, as current form suggests, things could get even better for both Colin Wilson and the Nashville Predators.