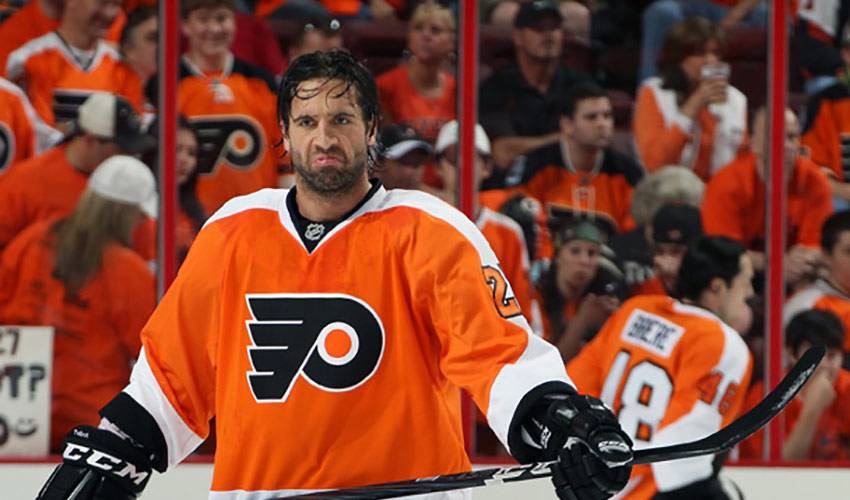 At any other time, the straggly-bearded look is not one that most guys, including hockey players, are looking for. This is not the case during the Stanley Cup Playoffs and, once again, NHLPA members are growing their hair to show they care in support of the NHLPA Beard-a-thon, an initiative that benefits the Canadian Heart & Stroke Foundation.

For the second consecutive year NHLPA members are teaming up for a good cause, as the players put away their shaving kits for the upcoming Stanley Cup Playoffs.

In true playoff tradition, Canadian fans are also being encouraged to join in to help raise funds and awareness for the Heart & Stroke Foundation.

Mason Raymond, of the Vancouver Canucks, and Maxime Talbot, of the Philadelphia Flyers, are already gearing up for this year's event to ‘grow hair because they care.'

Fans can visit the official website (www.beardathon.ca) where they can pledge their support for their favourite player and also sign-up to grow their own beards to help fundraise.{{QUOTE}}

“Let's be perfectly honest here,” said Raymond, the Vancouver left-winger, who also took part in last year's Beard-a-thon, which raised nearly $200,000. “It wasn't pretty for me last year and I'm not expecting it to be much better again this year. I guess the word sporadic would be the best way to describe what I had going last year.”

Talbot, in his first season as a member of the Flyers, after playing several campaigns with the Pittsburgh Penguins, is somewhat more confident in his expectations.

“I'm looking to grow the biggest, baddest and best beard,”

said the veteran of nearly 470 NHL regular season games, who'll be joined by fellow Flyer Scott Hartnell for the 2012 event. “I'm going to be looking to do something a little different this time around. But I'm going to wait until the last day of the regular season to shave. I'll do that and then just let it grow and grow.”

Raymond, a native of Calgary, who was selected 51st overall in the 2005 NHL Entry Draft, is anticipating another round of good-natured ribbing from his teammates once the Beard-a-thon officially gets under way.

“They definitely had some thoughts on my beard last year,” said the 27-year-old, who has 46 games of NHL playoff experience, all with the Canucks. “I had some pretty interesting comments. It was all in good fun, though.”

Talbot, the 234th overall pick in the 2002 NHL Entry Draft, will be looking to keep his teammates in line when it comes to their participation.

“They might cheat and start growing their beards a little sooner than they should,” offered the 28-year-old, who hails from Montreal. “But that's okay. I'm going to grow a good one. The most important thing is that this is a great cause. If we can do our part to help people take notice, that's the best part of all.”

“I had a lot of fun doing it last year and I'm really happy to be part of it again,” said the speedy forward, who will have several teammates, including Ryan Kesler, Chris Higgins and Dan Hamhuis joining him this year. “When you have the chance to do something fun like this and know that others will benefit, that's a great thing to be part of.”

Raymond insists he won't be trying to get a head start on the proceedings.

“Even if I did it a few days, a few weeks or a month before the final day of the regular season, I'm doubtful it would still turn out well for me,” he admitted. “But that's okay.”

Both players are simply hoping to be fashioning their new look for a long time once the puck drops on the Stanley Cup playoffs.

“That's exactly what you want,” said Talbot, who has skated in 66 playoff games, winning the Stanley Cup with the Penguins in 2009. “I hope to have a long beard by the time the playoffs are over. It's a tradition to keep that beard as long as you are in the playoffs. I don't care how long mine gets.”

Raymond, who was part of the Vancouver team that made it to the Cup finals last year, is hoping for the same.

“The longer you have the beard, the better,” he said. “You don't care how you look if you end up winning it all.”