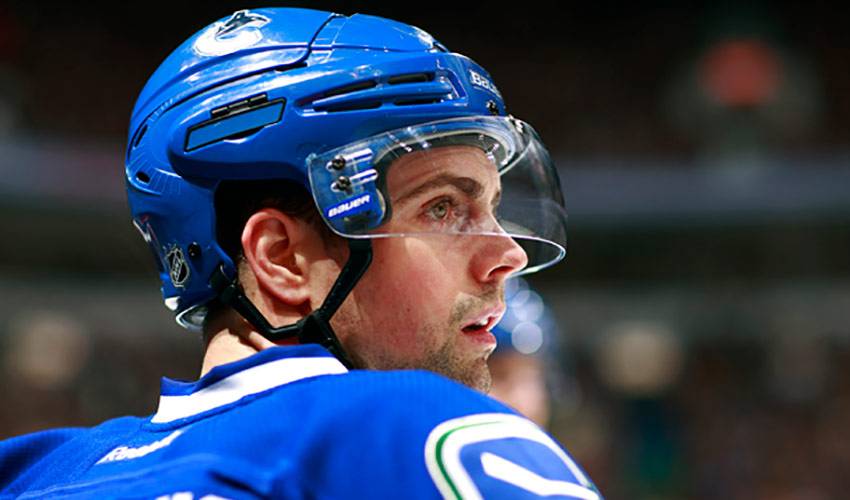 He had always hoped for the chance to play hockey with the Vancouver Canucks and on July 1, 2010, Dan Hamhuis’ dream came true. The small-town, British Columbia native is now plying his trade for the Canucks and enjoying the spotlight of being a “homegrown” talent.

Although it’s home to under 6,000 residents, Hamhuis’ hometown of Smithers, British Columbia, has produced some notable big-league players.

Brothers Joe Watson and Jimmy Watson won the Stanley Cup as defencemen with the Philadelphia Flyers in 1973-74 and 1974-75. Ron Flockhart competed in the NHL from 1980-1991 and Alan Kerr played for the New York Islanders, Detroit Red Wings and Winnipeg Jets in the 1980s and 1990s.

Dan is carrying on that rich NHL tradition for the people of Smithers. Here are 5 things you need to know about Dan Hamhuis, the 12th overall selection of the Nashville Predators in 2001:

THANKS, COACH DAD: “My dad coached me my first five years or so of hockey. Even when I made it to the NHL, he’d still point out things, give me advice, that type of thing. After a game, earlier on in my NHL career, he’d tell me things I needed to work on, things I did well. Sometimes, you don’t want to hear it, but I know he’s looking out for me. I think every player wants to find ways to improve their game.”

LIVING THE DREAM: “I suppose it was always in the back of my mind about wanting to play for Vancouver. Growing up, you hope that if you do make it to the NHL, that you could play for your hometown team. And when it does happen, it’s just a great feeling. Obviously, your family and friends are just as excited. Growing up in such a small town, hockey was always fun. The local rink was always busy and there were plenty of people that took advantage of the chance to play hockey. Even though that seems like such a long time ago, you still carry those memories with you.”

A HAPPY CAMPER: “I’ve always enjoyed being outdoors and camping. I took two of my girls, who are four and two, and we went out for a camping trip. You really never know how they will react to it, but the next morning, the youngest woke up and said to me, ‘Dad, I love camping!’ I was hoping they’d like it and they did. It’s once of those things you can keep doing as a family for years to come.”

A PRINCE OF A FELLOW: “I’m actually on my way to a golf tournament for my former Western Hockey League club in Prince George. They’ve been talking about doing one for a long time and it’s finally happening. It’s nice to be part of something that is the very first one. It’ll also be nice to see some old friends and catch up with them, while raising some money for a good cause. Update: Hamhuis’ foursome won the event with a score of -16.”

DRIVE AND DESIRE: “I’ve definitely been doing a lot of driving this summer, to see friends and family, but it’s always a beautiful drive in B.C. You’re always reminded just how great it is out here, going through small towns and seeing how amazing it is. I’ve always enjoyed it out here. You’re spoiled in a lot of ways, especially how many places you can go and do hundreds of things.”

While it wasn’t a memorable 2011-12 campaign for the Canucks, Hamhuis, who has skated in 629 regular season NHL games, had one of his best years. He appeared in all 82 games, while recording 33 points, his second highest big-league total.

What matters most to the man who won gold with Team Canada at the 2007 World Championships, however, is bringing a championship to the city of Vancouver.

“We have great support and it would be nice to deliver a Stanley Cup to our fans,” said Hamhuis, who has 52 games of NHL playoff experience. “Even in the off-season, you can’t help but think of what it would be like to be part of it. It’s the dream of every hockey player.