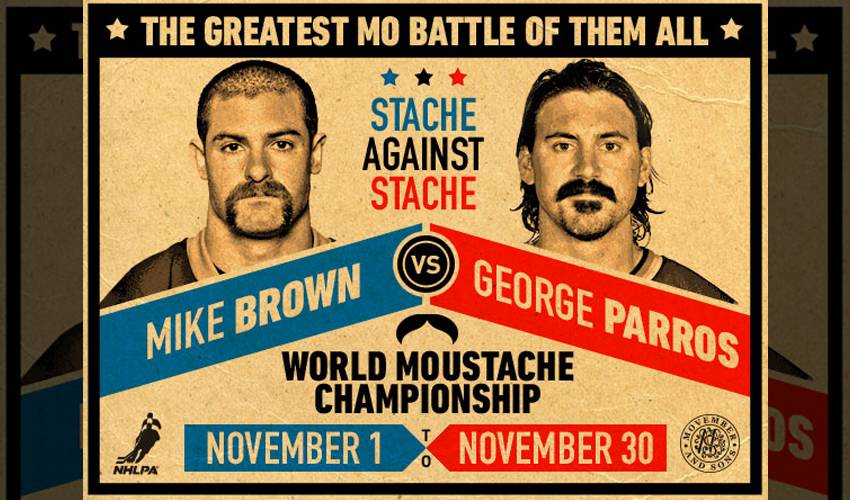 When it comes to close shaves, NHLPA members, including George Parros and Mike Brown, always make the cut in Movember. It was a change that took some time for him, and his friends, to get used to. But when Parros made the decision a few years ago to shave off his trademark mustache in support of Movember, the annual prostate cancer awareness initiative, he quickly embraced his new look.

“Well, I found out that I look like a 14-year-old boy whenever I shave my mustache,” said Parros, who joins several NHLPA members each year to support Movember. “I also look a lot less tough and I definitely look much younger. But that’s no problem at all. It’s a great cause and there are some wonderful, good-hearted people that work hard to make this such a success.”

While players, fans and others are asked to grow a mustache during the month of November, Parros and Brown will instead take it all off, so to speak, and then grow it back throughout the month, in what has been dubbed, ‘The Greatest Mo Battle of Them All…Stache Against Stache.’

Parros and Brown, in partnership with the NHLPA and Movember, will seek out fellow players to join their respective teams and face-off to see who fashions the best mustache and raises the most money.

“I think people associate me with the mustache, but I’m only too happy to help out by doing something for a great cause,” said the native of Pennsylvania, who received an assist last year from former teammate Corey Perry who did the shaving honours. “It’s something a lot of the Players look forward to.”

"When I decided to get involved in Movember, I contacted him and said he was inspiration for this. He was thrilled I was getting on board. It’s been a lot of fun, but the most important thing is that the funds are going to a great cause. I’ve had a lot of support from everyone, players, fans and the NHLPA." - Mike Brown

Including Brown, who has been growing his facial hair for the past six months, while garnering plenty of buzz on Twitter and other social media sites over the 24 weeks.

He participated in the customary “shave-down” on the morning of November 1st at a Toronto barber shop to ready for his battle with Parros.

“I guess I do look like a bit of a mountain man,” said the 27-year-old Illinois native, prior to the “shave-down”, who usually sports one of hockey’s more unique mustaches. “But it’s been great. I decided to get a head start on things and it’s really take on a life of its’ own.”

It was Parros who motivated Brown to get involved.

“We played together in Anaheim and he’s a great guy,” offered Brown. “When I decided to get involved in Movember, I contacted him and said he was inspiration for this. He was thrilled I was getting on board. It’s been a lot of fun, but the most important thing is that the funds are going to a great cause. I’ve had a lot of support from everyone, players, fans and the NHLPA.”

The funds raised in Canada support the most prevalent cancer among men in the country, prostate cancer. Last year, 180 NHLPA members took part.

Funds raised are directed to programs run directly by Movember and to their men's health partner, Prostate Cancer Canada. The two groups combine to ensure monies raised support a range of programs in line with their strategic goals in the areas of awareness and education, survivorship and research.

In the United States, the funds raised support prostate cancer, as well as other cancers that affect men. The money raised is then allotted to programs run directly by Movember and their men's health partners, including the Prostate Cancer Foundation.

Since its beginnings in Melbourne, Australia, Movember has grown to become a global movement, inspiring more than 1.9 million people to participate, with formal campaigns in Australia, New Zealand, the U.S., Canada, the UK, Finland, the Netherlands, Spain, South Africa and Ireland.

Fans can keep up to date on Brown and Parros via their profile pages:

Other NHLPA members are also signing up to participate in Movember. Stay tuned to www.nhlpa.com/movember for updates.