The Call to the Hall

Pavel Bure, Adam Oates, Joe Sakic and Mats Sundin take their place amongst the greats of the game of hockey on Monday as they highlight the 2012 Hockey Hall of Fame induction class 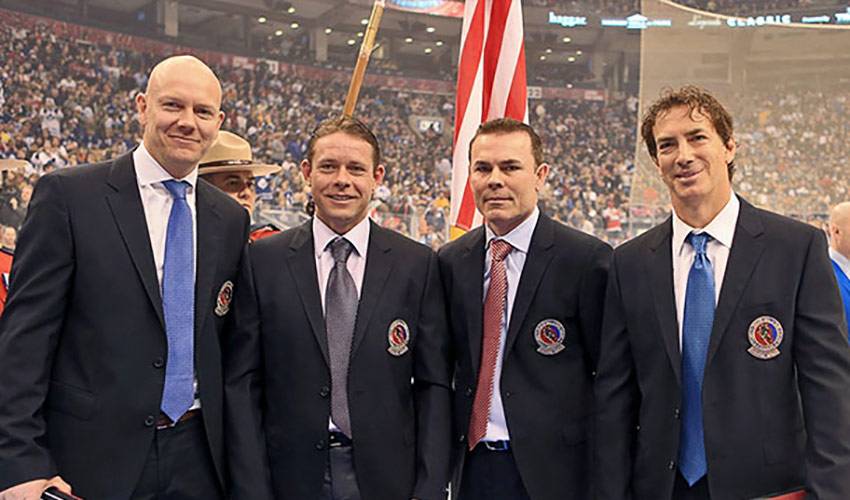 Their place in the Hockey Hall of Fame comes as no surprise, four players with different styles, but similar in their impact on the game of hockey.

For all of the goals they scored, the tallies they set up, the plays that left teammates and opponents alike in awe, one of Pavel Bure, Adam Oates, Joe Sakic and Mats Sundin’s most memorable hockey moments, will come off the ice, when the foursome are inducted into the Hockey Hall of Fame on Monday evening in Toronto.

Pavel Bure, who hails from Moscow, Russia, began his NHL life in 1991-92 with the Vancouver Canucks. He wasted little time making his presence known, netting highlight-reel goals, blowing past rivals with ease and stickhandling his way to the Calder Trophy as the NHL's Rookie of the Year.

The six-time All-Star selection played seven standout seasons with the Canucks. He was traded to Florida and won back-to-back Rocket Richard Trophies as the league's leading goal-scorer. The slick-skating forward averaged over a point per game in his career (779 points with 437 goals in 702 NHL games) and finished his career with the New York Rangers in 2003.

Adams Oates was one of the game’s most proficient passers, a forward who could put the puck on a teammate’s stick with jaw-dropping precision and ease.

He skated in three campaigns with RPI of the ECAC before signing as an undrafted free agent with the Detroit Red Wings in 1985. Oates would play 19 NHL seasons with seven teams, and boast four 100-plus point seasons. He retired in 2004 and is the sixth all-time career leader in assists with 1,063.

Joe Sakic is certainly no stranger to the Hockey Hall of Fame. In fact, the British Columbia native received the Ted Lindsay Award (the ‘Most Outstanding Player’ Award, as voted by the members of the National Hockey League Players’ Association) at the Toronto landmark in 2001.

In his 21-year career, Sakic won the Stanley Cup on two occasions, won numerous individual honours, and was voted to compete in 13 NHL All-Star Games. Named captain of Colorado in 1992, after serving as a co-captain in 1990–91), the former Canadian Hockey League Player of the Year is regarded as one of the sport’s top leaders.

He wore the ‘C’ for 17 seasons, the second longest tenure in NHL history and won Stanley Cups in 1996 and 2001. Sakic also skated for Team Canada at three Olympic Games, winning gold and earning MVP honours in 2002.

Mats Sundin was the first European born player to be selected first overall in the NHL Entry Draft, in 1989, by the Quebec Nordiques. The Swedish native spent 13 campaigns with the Toronto Maple Leafs, becoming the Original Six club’s all-time leader in goals with 420 tallies and assists with 567. He also suited up with the Vancouver Canucks following his time in Toronto. He is the first Swedish-born player to reach 1,000 points in the NHL. On the international scene, Sundin represented his country 14 times, highlighted by an Olympic gold medal in 2006.

The members of the National Hockey League Players’ Association extend their congratulations to all the inductees for their contributions to the game on and off the ice.