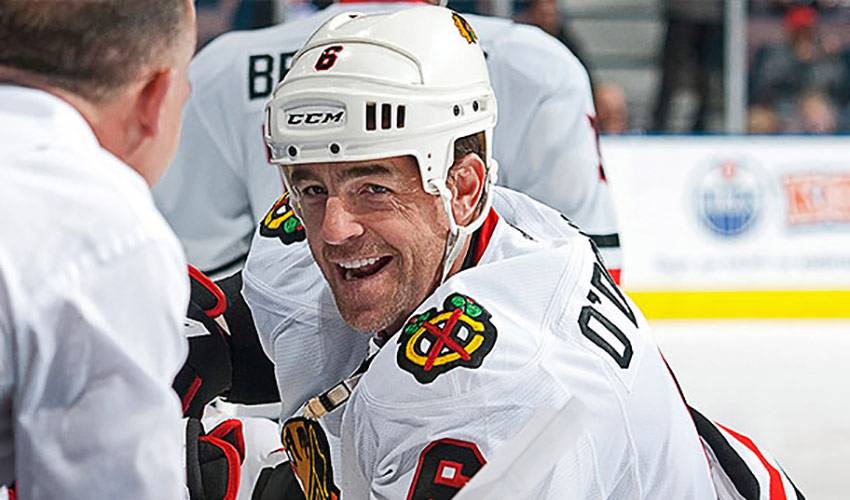 Sean O’Donnell, who called it a career on January 16, played and approached every one of his 1,224 NHL games in the same way.

He was the consummate stay-at-home defenceman for 17 big-league seasons, a hard-working, hard-hitting player that was far from flashy, but always dependable. “I certainly wasn’t a finesse type of guy,” said O’Donnell, who played for nine NHL teams, highlighted by a Stanley Cup win with Anaheim in 2007. “I always figured that if you didn’t notice me, I was doing my job.” While he might not have caught the eye of those in the stands, O’Donnell did garner the appreciation and respect of his teammates and opponents alike. Upon making his retirement official, the 123rd overall selection of the Buffalo Sabres in 1991, received several text messages from those he had shared the ice with. “To be honest, I was quite taken aback at all of the well-wishes that came in,” said the 41-year-old, who had seven points in 51 games with the Chicago Blackhawks last year. “It kind of caught me off guard. But it means a lot. Hopefully, you were able to make an impression on people through what you did on the ice and who you were as a teammate.” It comes as no surprise that O’Donnell, who played three seasons of junior with the Sudbury Wolves of the Ontario Hockey League, will miss the camaraderie of the game. “When you talk about team sports, that’s one thing you know you’ll think about it once your career is over,” said the Ottawa native. “You love being around the guys on game day, but you also miss that connection during the summer months, too.” It’s not the only aspect of the sport he’ll miss. “I loved the competition, the challenge every night of working together towards one goal,” offered O’Donnell. “Trying your best to be at your best or not embarrassing yourself out there. There are so many highs and lows with hockey. But it’s addictive.” An NHL career was hardly a guarantee for the blueliner who spent three seasons in the American Hockey League with Rochester after his draft year, plus 61 games in 1994-95 in the International Hockey League with Phoenix. “I certainly never envisioned that I’d play as long as I did,” admitted O’Donnell. “But after I was traded to Los Angeles in 1994, I played in 15 NHL games in 1994-95 and never went back to the minors. After my third our fourth year, I felt comfortable that I could have a solid NHL career.” And that’s just what he achieved. While it’s a time for reflection, O’Donnell isn’t simply looking back these days. He and his wife are expecting their first child soon. “I’ve always wanted to be a dad,” he admitted. “It’s a great time, very exciting for both of us. There’s plenty to look forward to.” As for a possible hockey-related career, O’Donnell isn’t in a rush to make any decisions. “I love the game,” he said. “I loved to play and to compete. I’d love to stay involved in hockey in same way. I have some good connections, but for now, my focus is on my wife and family.” Hardly a surprise answer from one of the game’s true team players.