Patrick Marleau is heaping praise for his blistering start on his linemates, Thornton and Pavelski 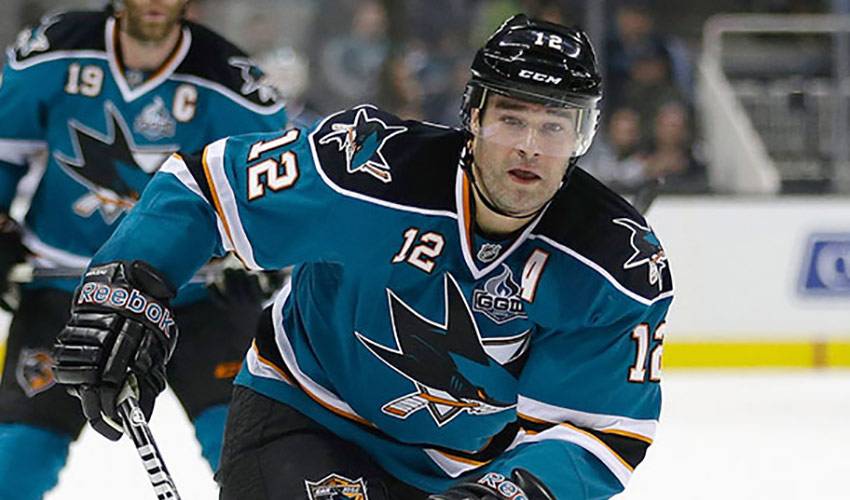 Take two extraordinary Joes and one dangerously offensive Shark and it all adds up to one of hockey’s most formidable and feared lines.

There is anything number of things you could talk about when it comes to Patrick Marleau’s start to the season, one that has put him near the top of the league in scoring. But the soft-spoken San Jose forward was thrilled to be given the opportunity to speak about his two linemates, namely Joe Thornton and Joe Pavelski. “It just never feels comfortable to talk about yourself,” offered the veteran forward who has 14 points, including a league-best nine goals, after eight games for the Pacific Division-leading Sharks. “I would certainly point to Joe and Joe as a big factor in why things have gone well from a personal standpoint.” While they share the same first name, the duo who skates on the top line with Marleau each brings something different to the ice. For Marleau, the all-time Sharks leader in goals, even strength goals, power play goals, points, shots, and games played, it’s a hockey player’s dream come true. “Both of the guys played in Europe during the lockout and they were in mid-season form from the first game,” noted the Saskatchewan native. “They were back in the swing of things from the first drop of the puck which was obvious. “With Joe (Thornton), his vision on the ice is unbelievable. He can bring two guys to him, draw them over and then that puts you at the advantage. He has that long reach which makes it difficult on the opposition and you just know he’s going to get that puck to you. That means you have to be ready at all times. It doesn’t matter how many bodies or sticks are in the way, he finds a way for the puck to be on your stick.” Pavelski is equally effective at creating bedlam inside the other team’s zone. “Joe does a little bit of everything, a guy who can hunt that puck down no matter what, a guy who battles to get possession,” said Marleau. “He’s got a great shot and an ability to put himself in a perfect spot for a chance to score. Every shift, Joe is going to work hard to create an opportunity.” It isn’t just one line, however, that has the put the Sharks near the top of the overall standings. “I can’t say you ever expect to get off to this kind of a start as a team,” admitted the second overall pick of San Jose in 1997. “I didn’t see that coming. But I think the reason it has gone so well is that we are able to roll four lines every night, where each player is capable of making a significant impact. Our defence has been amazing and our goalies have been great, too.” As for Marleau, he’s having as much enjoyment as he did during his childhood days on the outdoor rinks. “All you want to do is see the team be successful and whatever you can do to play a part in that is what matters. I’m having fun.” He’s even managed to impress one of his toughest critics, six-year-old son Landon. “I have three boys and they all keep me grounded,” said Marleau. “My oldest, he always lets me know if I’ve done good or bad after a game.” It’s a pretty good bet Landon Marleau has had little, if any reason, to pan his dad’s performance in 2012-13.