BETWEEN THE BLUELINES WITH COLIN FRASER

Kings forward chats about winning the Cup, sharing it with his family and being the toast of Los Angeles 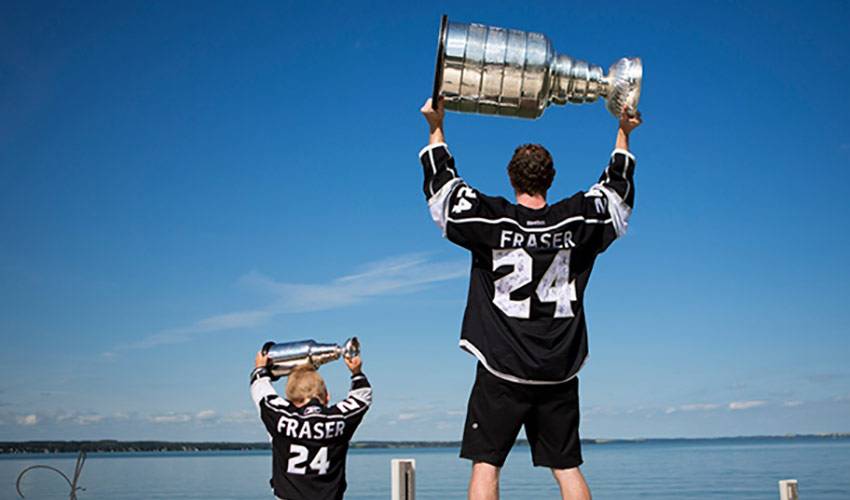 The 28-year-old, who won the Cup with Chicago in 2010 and Los Angeles in 2012, has a picture-perfect reminder and story to go with his latest championship, something he recently shared with NHLPA.com. Here are 5 things you need to know about Colin Fraser: IF IT’S BROKE, FIX IT?: “After we won the Cup with Los Angeles, we took it to Alberta to share with people there. My wife and I got our young son (Calder) to practice hoisting the mini Stanley Cup, the one we all received, over his head. When we got to the lake where we had both Cups with us, my wife snapped a picture of us looking out at the water, with them held up high. It was the only picture I wanted. After the photo was taken, the head of his mini Cup snapped off and fell on the dock. We haven’t fixed it as of yet. Maybe we should get around to doing that.” SHARING THE JOY: “For every guy that makes it to the NHL, the dream is to win the Stanley Cup. I’ve been lucky enough to win it twice. It was more special the second time because I played a lot more and felt as if I had made more of a contribution. I think one of the most special things about winning it is how excited everyone else is when they see it. To me, no matter who you are with or where you are, it brings everyone together.” HOCKEY PLAYER/HUMANITARIAN: “It was such a great experience to play my junior hockey in Red Deer (Alberta). There is a genuine closeness between the players and the fans. I was lucky enough to be part of several community events. Whether it was reading to kids, visiting schools, playing floor hockey with kids or signing autographs at the mall, I met a lot of great people. To win those awards (Western Hockey League and Canadian Hockey League Humanitarian of the Year, both in 2005) was a real surprise. You never do that to be noticed. I was shocked. It’s one of those things that bring back a lot of great memories. ” GETTING HIS KICKS: “Playing in Los Angeles, you just never know what celebrities you might run into. When we won the Cup, we had one particular party where David Beckham showed up. He’s someone everybody knows. He had come to our games and there he was at the party. All I can say is that he is a super, down-to-earth guy. He was just a regular person and it was a thrill to get the chance to meet him. ” FIT FOR A KING: “I think this team is a good fit for me. I’m getting a chance to play quality fourth-line minutes and to stay in the lineup. Having the confidence of your coaches allows you to go out there every night and just play. You don’t have to think or worry about things. When you take a shift, you go out and feel good about what you can do.” The 69th overall selection of the Philadelphia Flyers in 2003, Fraser, who hails from British Columbia, still takes time to sit down and relive his Cup-winning moments, a reminder of what everyone plays for. “If you are ever having a rough patch or just want to take a second to look back, it’s a great reminder of a true team achievement. When you were growing up, you’d watch players carrying the Cup around the ice or coverage of the championship parade, and dream it was you. You don’t really know how special it really is until it happens.” A feeling that is twice as nice for Colin Fraser.