The March of the Penguins

Douglas Murray brings his physical, defensive style to Pittsburgh as the Pens go all-in on 2013 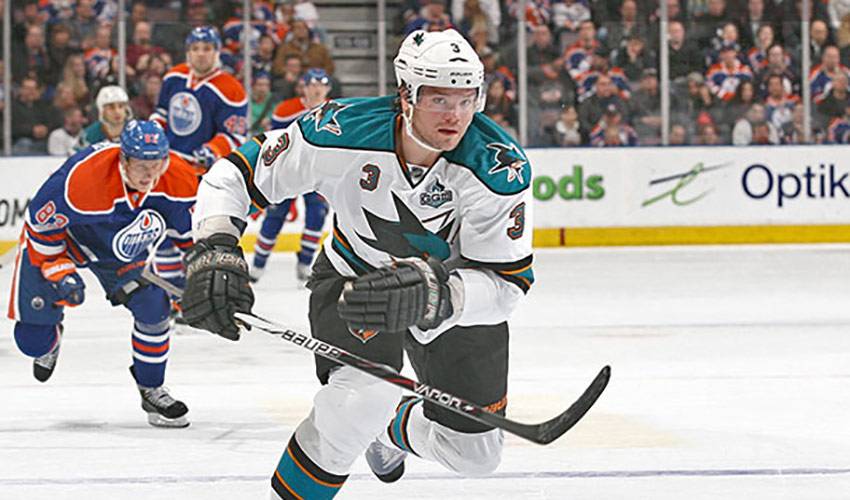 Doug Murray has no intentions of slowing down the march of the Penguins now that he’s wearing Pittsburgh colours.

Dealt from San Jose to Pittsburgh on March 25, Murray, a stalwart on the Sharks’ blueline for 451 games, is somewhat of a conformist, a player bent on doing what he does best, and focusing solely on team success. So, if you happen to be one of the Penguins’ offensive standouts, there’s no need to worry about Murray, the shot-blocking, hard-hitting defenceman, taking aim at leading scorer bragging rights. “I don’t think guys like Sidney Crosby, Evgeni Malkin, Chris Kunitz, James Neal and all the other scorers on the team have to worry about me,” Murray told NHLPA.com just hours after he was sent to the Penguins. “I don’t even think I’d score as much as they do when I play shinny hockey in the summer.” While he’s not a scoresheet staple, Murray, who launched his NHL career in 2005-06, is every bit as valuable a presence on a team eager to add a fourth championship banner to the rafters. Standing 6’3” and weighing in at 245 pounds, the 33-year-old is the prototypical shutdown blueliner, a bruising defender that can tangle with the league’s best shooters. It’s no surprise then to learn he’s not about to add, alter or tinker with his approach. “I play a very simple style which has been successful for me over the years,” said Murray, who played four seasons of U.S. collegiate hockey with Cornell from 1999-2003. “I don’t think I need to be trying to do anything different. I think that’s what makes me effective.” It’s also what has endeared him to his (now former) teammates, including San Jose forwards Logan Couture and Ryan Clowe, both of whom were quick to take to Twitter to wish Murray well. “If you go out and do your job to the best of your ability, it usually earns you the respect from those who you play with,” said Murray, who scored his first NHL goal on February 21, 2008, against the Philadelphia Flyers. “Sometimes, it’s those little things you do that can play a part in helping your team get those two points.” It’s an attitude that will no doubt help Murray fit in with a new group of players. “I don’t know any of the guys on a personal level,” he noted. “But we’re talking about hockey players. I’m sure they are easy to get along with and they’ll make me feel welcome.” Murray is embracing the opportunity to suit up for a legitimate Stanley Cup contender. “I didn’t take the trade personally at all,” said Murray, who agreed to a four-year contract extension with the Sharks in 2008. “Hockey is a business and this happens all the time. I have no grudges at all towards San Jose. I felt a trade could happen. You are always a little bit surprised, but I certainly wasn’t shocked. I’m excited to be in Pittsburgh.” Despite their rightful reputation as a high-scoring offensive juggernaut, the Penguins take an equal measure of pride in their defensive play, something that resonates with Murray. “This is a very skilled team, but they also play a total team game,” offered Murray. “I’m just going to play my game. I guess only time will tell how things will go.” With Doug Murray in the fold, it just might be the banner season Penguins fans are hoping for.