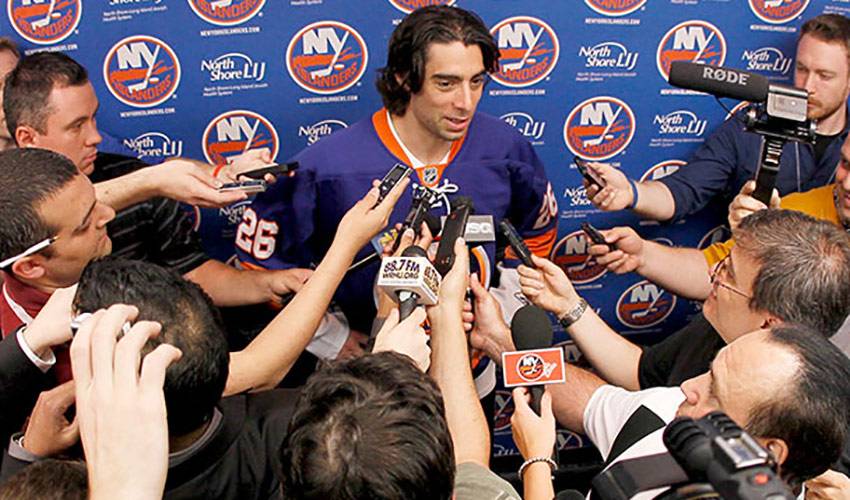 It was obvious Matt Moulson was a tired man on Wednesday morning. It was equally evident he was elated to have reached a career milestone.

Less than 12 hours after the New York Islanders secured their first playoff berth since 2007, Moulson, who once again played a leading offensive role on the Atlantic Division squad, was still wrapping his head around the thought of making his first NHL post-season appearance.

“A lot of the guys, they’ve never had that experience before,” said the forward, who has 15 goals and 44 points with one game remaining in the regular season. “I think that’s what makes you the happiest. This is what you work for and it’s been a long time coming. It’s always disappointing when you don’t get in. This year, we don’t have to deal with that.”

It’s been an up and down year for the Isles, who got off to a miserable start, but have played their best hockey over the last six weeks.

Moulson, understandably, is focused on the club’s recent form.

“It certainly wasn’t the way we wanted to begin the season,” said the 29-year-old Ontario native. “But I guess when you look at the big picture, we can say we didn’t give up and we stuck with it.”

That would also be applicable to the game that put the Isles in the Eastern Conference playoff picture.

“It’s tough to celebrate when you lose, but we needed one point and we got it,” said Moulson, who had two assists in the game, including a helper on John Tavares’ late-game tying tally. “Carolina played well. They gave us everything they had. It certainly wasn’t our best effort, but we found ways throughout to come back when we needed to.”

Exuberance over their accomplishment quickly gave way to further expectation.

“Funny, isn’t?” noted Moulson. “This was what we were waiting for and you are obviously ecstatic. For a month and a half, we worked to get to this point. Now that we are, our collective mindset shifted to understanding there is more work to be done. There are other things we want to do. This is one step for us.”

Still, the victory remains a sweet one for the 263rd overall draft selection of the Pittsburgh Penguins in 2003.

Not all in the hockey world figured the Islanders would be in the Eastern Conference’s top eight this season.

“Everyone bought into the system and what we needed to do be where we are,” offered Moulson. “Some people wrote us off, but we stayed focused. I’m so proud of everyone. The guys are happy.”

And hungry for more success.

“It was great to have that sense of, ‘Yes, we did it!’ after that game in Carolina. There were a lot of happy faces. Hopefully, we have plenty more to celebrate. That’s what we’re focusing on.”