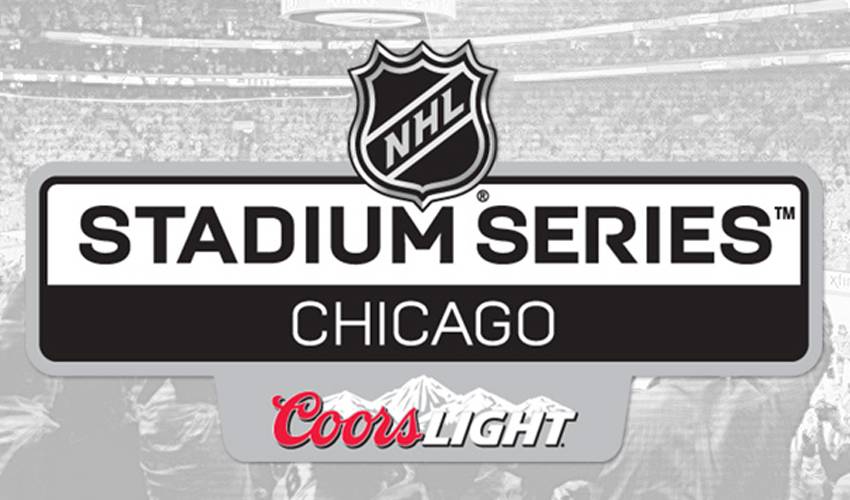 NEW YORK (May 1, 2013) – The Chicago Blackhawks will play host to the Pittsburgh Penguins in a regular-season outdoor NHL® game at Soldier Field on Saturday, March 1, 2014, at 8 p.m. ET/7 p.m. CT, the National Hockey League announced today.

"Our fans and our teams love outdoor games and we are thrilled the 2014 Coors Light NHL Stadium Series™ will present a number of these experiences to a large number of our fans in a variety of National Hockey League markets,” Commissioner Gary Bettman said. “The Chicago game, at Soldier Field, will be a match-up of two recent Stanley Cup® champions at a landmark stadium. We thank the Blackhawks and Penguins, Coors Light, Soldier Field and everyone involved in what will be a memorable, exciting and fun event."

This marks the second time Chicago is hosting a regular-season outdoor NHL game. On a magical New Year’s Day in 2009, the Blackhawks played the Detroit Red Wings in the 2009 Bridgestone NHL Winter Classic®. The teams faced off in front of 40,818 fans who packed historic Wrigley Field and thousands more looking on from the rooftops across the street in comfortable 32-degree weather.

“The Chicago Blackhawks are privileged to be included in the National Hockey League’s Stadium Series,” said Blackhawks President & CEO John McDonough. “Hosting the Pittsburgh Penguins at iconic Soldier Field promises to be a unique experience for our organization and our fans.”

“The Penguins are excited to be selected for the NHL Stadium Series™ in Chicago, and it will be a special honor for our players to be able to skate at Soldier Field,” said David Morehouse, CEO and President of the Pittsburgh Penguins. “Soldier Field is one of the iconic venues in our country, a stadium that’s filled with so much sports history. We look forward to writing a new chapter with the Blackhawks on March 1.”

The Blackhawks and Penguins enter the 2013 Stanley Cup® Playoffs as the top seeds in their respective conferences.

“Returning hockey to where it originated, in the cold elements of an outdoor rink, by playing at Soldier Field in Chicago will no doubt be a game the players will have circled on next season’s schedule,” said Mathieu Schneider, NHLPA Special Assistant to the Executive Director. “This will be a great event for hockey fans in Chicago and Pittsburgh, and one that they won’t soon forget.”

League partner MillerCoors has secured title sponsorship of the NHL Stadium Series™ for its flagship Coors Light brand. As the title partner for the event, Coors Light will be provided with a number of assets in addition to incorporating its logo into the official game and event mark. Highlights include on-air title broadcast rights, camera-visible dasherboard placements of the Coors Light logo, in-arena video spots and PA announcements, activation across key retail and on-premise accounts and integration of the Coors Light brand throughout all NHL media properties - including video, print, digital and radio.

“As the only beer that offers ‘refreshment as cold as the Rockies,’ Coors Light appreciates how truly special wintertime outdoor hockey can be,” said Andy England, MillerCoors CMO. “That’s why we’re especially excited to partner with the league in bringing fans the Coors Light NHL Stadium Series throughout the 2013-14 season. And to host one of the games here in our hometown, at one of the most revered venues in American sports, between two of the best teams in the NHL, makes it even more special.”

Further details on this special NHL event, including national broadcast information and specifics on ticket opportunities for the season-ticket holders of each team, will be released shortly. Fans interested in receiving more information on ticketing, news and special offers around the event should register at www.NHL.com/2014Chicago.

NHL Network™ and NHL.com will provide extensive coverage live from Chicago leading up to and after the game. NHL Social will have exclusive coverage on all social platforms, including the use of the hashtag #StadiumSeries.

Since the NHL established the tradition of hosting regular-season games outdoors to celebrate the origin and traditions of hockey, fans across North America have expressed their desire for those celebrations to spread further across the hockey landscape.

Five of the six most-watched regular-season NHL games in the U.S. in the past 37 years have been played outdoors. The 2011 Bridgestone NHL Winter Classic® in Pittsburgh on NBC aired in primetime and was the most-watched NHL regular-season game ever in the U.S. with an average of 4.5 million viewers. The event also drew the largest audience on CBC for any of the U.S.-based outdoor NHL games.

The NHL recently announced that the 2014 Bridgestone NHL Winter Classic® is scheduled for Wednesday, Jan. 1, when the Detroit Red Wings will play host to the Toronto Maple Leafs at Michigan Stadium on the University of Michigan campus. It is anticipated that the 2014 Bridgestone NHL Winter Classic® could set a world record for attendance at a hockey game.

The first-ever NHL regular-season game contested outdoors was played in 2003 when the Edmonton Oilers hosted the Montreal Canadiens at Commonwealth Stadium. For the 2010 Bridgestone NHL Winter Classic®, the Boston Bruins hosted the Philadelphia Flyers at Fenway Park. In February 2011, the Calgary Flames hosted the Canadiens in the 2011 Tim Hortons NHL Heritage Classic ™ at McMahon Stadium. In 2012, the Flyers hosted the New York Rangers at Citizens Bank Park.