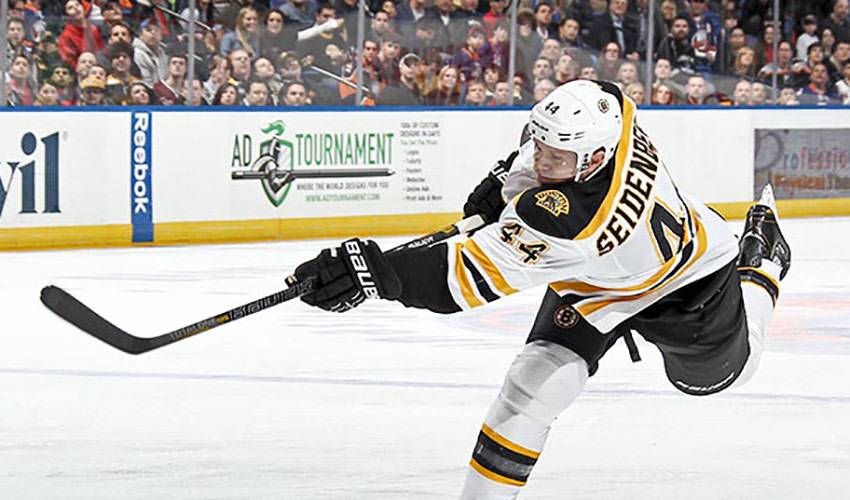 It was no surprise that Dennis Seidenberg was his usual steady self in Boston’s win over Toronto in their Eastern Conference playoff clash and even less so to see him deflect praise to teammate and fellow defenceman, Wade Redden.

Seidenberg took 25 shifts, logged over 21 minutes of ice time and was part of a defensive unit that frustrated Maple Leaf forwards throughout the Bruins opening game 4-1 quarter-final triumph on home ice. One day removed from the victory, Seidenberg, who deserved plenty of recognition for his play, was full of praise for the game’s first star. “It was a very good feeling for all of us to see Wade score and be a huge part in the win,” Seidenberg told NHLPA.com on Thursday morning. “He’s got such a great rhythm when he has the puck. He’s got great control and vision. It was an awesome feeling for everyone.” The No. 2 pick on the 1995 Entry Draft, Redden, who recently celebrated his 1,000th NHL game, was waived by the New York Rangers in September of 2010. He spent two seasons in the American Hockey League before signing with St. Louis in January. At the 2013 Trade Deadline, he was dealt to the Bruins. On Wednesday night, he had two points and netted his first NHL playoff goal since 2007. “The thing that makes me happiest of all is that we won the game,” said Redden, who also spoke with NHLPA.com and will be featured soon in an upcoming story. “To join this corps, to be part of a great group like this, it’s really special for me.” His teammates are equally glad to see him on board. “I think it was easy for him to come here because we have a good room, guys welcomed him right away and made him feel comfortable,” said Seidenberg, of the 35-year-old Saskatchewan native’s early days in Boston. “After what happened, playing in the minors, and working hard to get back, it’s nice to see him have such a great game.” The same can be said for a Bruins team that came into the playoffs on a two-game losing streak and a record of 3-5-2 in their last 10 contests. Emotions have been high in the city in the aftermath of the Boston Marathon bombings on April 15. “We didn’t talk about it leading up to the game,” noted Seidenberg. “Obviously, what happened was a tragedy and it affected us all. But we were able to figure out a way to deal with that. We have great fans that are here to support us, so we wanted to focus on the task at hand. We were able to stick to our game plan.” Seidenberg, who was traded to the Bruins from Florida in March of 2010, expects the Leafs to come out strong when the teams take to the ice again on Saturday. “We’ve had success, against Toronto, but now it’s a clean sheet,” said Seidenberg, who was part of Boston’s Stanley Cup-winning squad in 2011. “They have a lot of talented forwards who can create a lot of opportunities. That’s why you need to stay on an even keel. We played well, but you can’t get too carried away with that. You need to be even better next time.”