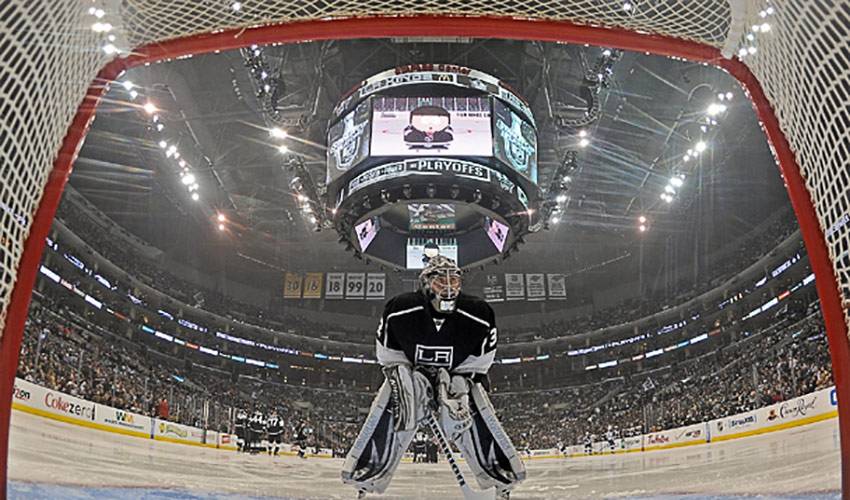 Week 1 has certainly seen triumph and heartbreak, with players endearing themselves to their teams’ supporters during close games every night. Here’s a look at 10 of the week’s best highlights since the playoffs kicked off on Tuesday, April 30th.

1. The first two games of the 2013 playoffs needed extra time to be decided. It was Chicago’s Bryan Bickell, a Bowmanville, Ontario native, who solved the stalemate in the Wild/Blackhawks opener.

The return of Wade Redden

2. Veteran defenceman Wade Redden of the Boston Bruins made his return to the playoffs, scoring his first NHL playoff goal in six seasons in a multi-point effort that earned him the game’s second star in a win over the Maple Leafs.

Two dental injuries for goalies in one week?

3. The Canadiens kept Ottawa goalie Craig Anderson busy, throwing 50 shots his way in the losing effort on Thursday. One such shot resulted in Anderson losing one of his front teeth, an injury typical to hockey players, but not usually goalies. Anderson was good natured about the result, attempting to use the incident to rally support from Senators fans for his EA NHL 14 Cover Vote campaign.

Sometimes I stop pucks with my face. . . Because its the playoffs. Can i get some #NHL14Anderson love #sensarmy? img.ly/uwnd

4. In other action, it was Anderson’s counterpart, goalie Carey Price, who also strangely needed dental work on Friday, one game after Anderson’s mishap.

5. Four games filled the slate Friday night, including an intense battle in Pittsburgh that saw the return of Penguins captain Sidney Crosby after missing 13 games with a broken jaw. Despite Crosby’s two-goal effort, the Islanders’ high-speed offense eventually got the better of the Penguins, earning them a 4-3 victory.

6. Saturday’s action featured some of the best goalie performances thus far, with the Capitals coming away with a shutout victory of the Rangers. Braden Holtby earned the difficult win after battling opponent Henrik Lundqvist, who was in the Rangers’ net and also turned in an incredible performance.

8. The intensity level may have been at its highest on Sunday. Extra time was needed in both New York and Minnesota, where Chris Kunitz buried the overtime winner to lead the Penguins over the Islanders, and Jason Zucker scored just over two minutes into the extra frame to give Minnesota the win over Chicago.

9. Damien Brunner of the Red Wings had a heroic overtime goal, evening a tight series at two games apiece with the Anaheim Ducks, while setting the stage for what is now a best of three series.

First taste of the post-season

10. The playoffs are a special time for any NHL player, let alone an NHLPA member having his first taste of the post-season. Ottawa’s Jean-Gabriel Pageau, born in the same city, recorded a hat-trick in what was an unbelievable playoff performance.