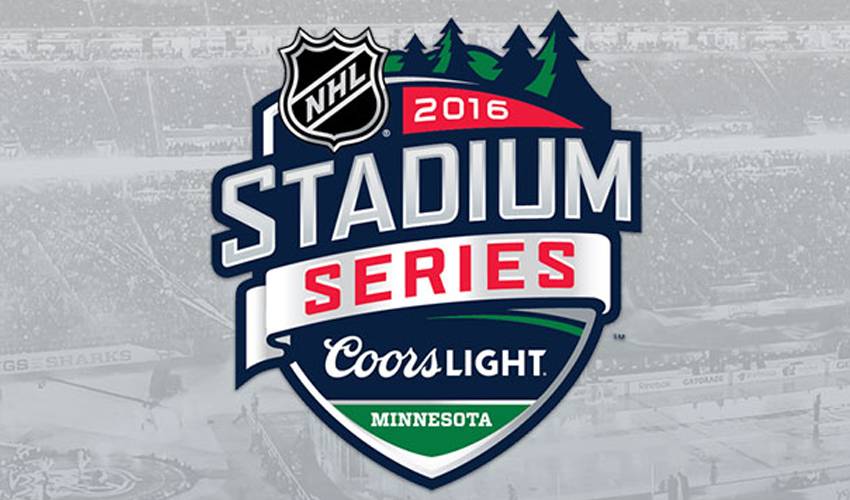 NEW YORK (May 15, 2013) – Two outdoor regular-season NHL® games will be played at Yankee Stadium during the 2013-14 season as part of the 2014 Coors Light NHL Stadium Series™ the National Hockey League announced today.

The two games scheduled for Yankee Stadium are:

The two games at Yankee Stadium complete the four-game 2014 Coors Light NHL Stadium Series™ scheduled for next season. On Jan. 25, the Anaheim Ducks will play the Los Angeles Kings at Dodger Stadium. On March 1, the Chicago Blackhawks will host the Pittsburgh Penguins at Soldier Field.

“The innovative nature of the Stadium Series affords the opportunity to have all three NHL teams in the New York-New Jersey metropolitan area play, outdoors, at one of the most-celebrated stadiums in the world,” Commissioner Gary Bettman said. “We'll be able to create a multi-faceted, multi-day experience for our fans, and we thank the teams, Coors Light, the New York Yankees and Yankee Stadium for their support of this memorable NHL event.”

In just five years of its existence, Yankee Stadium already has provided the setting for some of the country’s most popular events as the baseball diamond has been transformed to host games between several of college football’s finest programs – including the annual New Era Pinstripe Bowl – concerts by Grammy Award-winning acts, top-tier soccer talent from around the world and a super welterweight title boxing match. However, the 2014 Coors Light NHL Stadium Series™ will be the first time the Stadium has been used for hockey.

As one of the world’s most prestigious addresses, the original Yankee Stadium was also the home for scores of additional sports, entertainment and cultural events, as well as political assemblies, three Papal masses, religious conventions, concerts, NYU commencements and the circus.

“We have long thought that Yankee Stadium would be a great venue for outdoor hockey,” said Lonn Trost, New York Yankees Chief Operating Officer. “In addition to being a first-class baseball facility, Yankee Stadium was designed to house unique and memorable events, such as the NHL Stadium Series™. Hosting two of the NHL’s classic rivalries at Yankee Stadium will be a great kickoff for the worldwide sporting events in the New York/New Jersey metropolitan area scheduled in early 2014.”

The rivalries among the three NHL clubs based in the New York metropolitan area go well beyond the natural contentiousness of proximity. The Rangers, Islanders and Devils each have been successful on the ice, combining to win 11 Stanley Cup® Championships, including eight of the past 32.

“The New Jersey Devils are proud to have been selected to host the first of two games at Yankee Stadium,” said Devils President/CEO/General Manager Lou Lamoriello. “The NHL Stadium Series will be a memorable experience for our organization, our players and, most importantly, our fans. We are thrilled to play our divisional rival, while adding to the legacy of one of the nation’s most recognized sports facilities.”

“The New York Islanders are honored to take part in the National Hockey League’s outdoor stadium series,” Islanders General Manager Garth Snow said. “Our fan-base is one of the most passionate in the NHL. The support we consistently receive from our fans was on display during the 2013 Stanley Cup Playoffs and I expect it to be on an even greater scale when we take on the Rangers. This is what makes the games against the Rangers one of the best rivalries in the league. I look forward to seeing a strong contingent of the orange and blue in the stands at Yankee Stadium.”

“The New York Rangers are honored to participate in these two historic games at Yankee Stadium, bringing hockey into the home of another one of New York’s iconic sports franchises,” said Rangers President & General Manager Glen Sather. “Playing hockey outdoors takes the game back to its roots and reminds us all why we laced up our skates as youngsters. We are excited to be able to bring that experience and thrill to our fans and the city of New York.”

Division foes during the regular season, the teams also have battled each other during memorable postseasons.

The Rangers and Devils have met six times in the Playoffs. Perhaps the most memorable of those series was in 1994 when the clubs faced off in the Eastern Conference Final. After proving to be the two best teams in the League during the regular season, they required a legendary series to determine the Eastern Conference champion, with the Rangers’ Stephane Matteau winning the deciding Game 7 in double-overtime. The Rangers went on to win the Stanley Cup® in seven games over the Vancouver Canucks. The Devils countered 12 months later by winning the first of their three Stanley Cup® Championships over the following nine seasons.

“The teams playing in these two games - the Rangers, Islanders and Devils - have tremendously loyal fans and the rivalries are intense because of their proximity and playoff history,” said Mathieu Schneider, NHLPA special assistant to the Executive Director. “Yankee Stadium is a landmark venue in New York City and to see hockey played in such a celebrated setting will be extremely memorable to the players and everyone involved.”

Further details on this special NHL event, including national broadcast information and specifics on ticket opportunities for the season-ticket holders of each team, will be released shortly. Fans interested in receiving more information on ticketing, news and special offers around the event should register at www.NHL.com/2014NewYork.

NHL Network™ and NHL.com will provide extensive coverage live from New York leading up to and after the games. NHL Social™ will have exclusive coverage on all social platforms, including the use of the hashtag #StadiumSeries.

Since the NHL established the tradition of hosting regular-season games outdoors to celebrate the origin and traditions of hockey, fans across North America have expressed their desire for those celebrations to spread across the hockey landscape. Five of the six most- watched regular-season NHL games in the U.S. in the past 38 years have been played outdoors.

The NHL recently announced that the 2014 Bridgestone NHL Winter Classic® is scheduled for Wednesday, Jan. 1, when the Detroit Red Wings will host the Toronto Maple Leafs at Michigan Stadium on the University of Michigan campus. It is anticipated that the 2014 Bridgestone NHL Winter Classic® could set a world record for attendance at a hockey game.

The first-ever NHL regular-season game contested outdoors was played in 2003 when the Edmonton Oilers hosted the Montreal Canadiens at Commonwealth Stadium. Since then, the NHL has played six additional regular-season games outdoors. For a history of these games, please visit NHL.com.