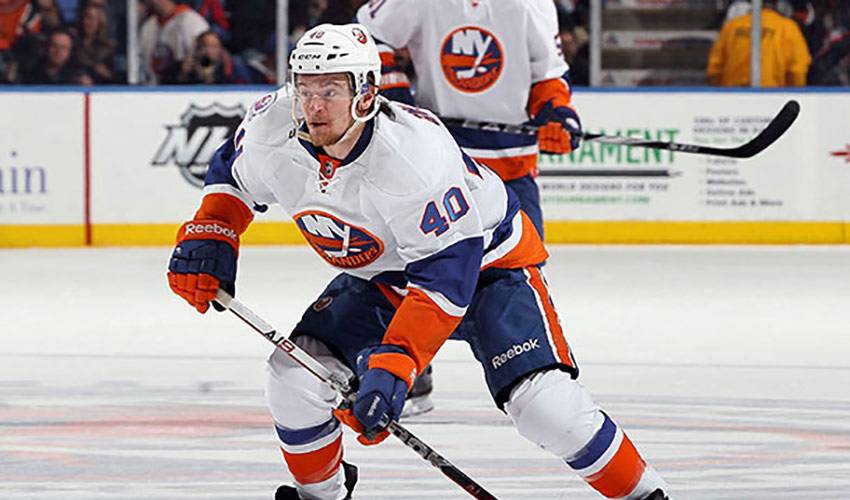 There was a time when Michael Grabner didn’t think an NHL future was in the cards. Over 200 big-league games later, the Austrian is thankful he found his way to the sport’s biggest stage.

His mother introduced him to hockey when he was five, encouraging him to give the game a try. And that’s just what he did.

It didn’t take long for Grabner to fall in love with the sport. He’d spend several hours a week at the rink in Villach, a picturesque city that’s home to roughly 60,000 people.

“We lived right across from the arena, it was a very short walk,” recalled Grabner. “I took to hockey right away. I played with all my friends from the area. It was different from the rinks in North America because it was only open in the winter months. When the lakes would freeze, we’d be out there. Everyone would play roller hockey or ball hockey at other times of the year.”

Ten years after he first laced up his skates, Grabner joined his hometown EC VSV junior club, skating in 36 games before making the jump to the men’s team in 2003-04.

“The longer you play, the more you develop a passion for it,” offered the right-winger. “There was a time when I didn’t know much about the NHL at all. When the Internet came to be, I started to follow the NHL. Of course, you see all the big names and watch highlights and you become more curious about it. For me, at least when I was younger, it was about the World Championships. But that changed after a while.”

At the age of 17, Grabner decided his best shot at landing an NHL career was to head to North America. He suited up in the Western Hockey League (WHL) as a member of the Spokane Chiefs.

It proved to be the perfect blueprint for his goal. In 2006, in his second campaign with the Chiefs, Grabner was selected 14th overall by the Vancouver Canucks.

“Unbelievable, really,” said Grabner, who scored 22 goals in the final 23 games of the 2005-06 WHL season. “If someone would have told me it would have happened, there was a time when I don’t think I’d believed it.”

He was traded to Florida during the 2010 Entry Draft. One hundred days later, he was placed on waivers. Forty-eight hours after, he was claimed off waivers by the New York Islanders.

Despite the drama, Grabner responded by scoring 34 goals in 76 games, copping top honours as the fastest skater at the 2011 All-Star Game SuperSkills Competition and being named as a 2011 finalist for the Calder Trophy as NHL rookie of the year.

“It’s crazy to see I’ve played over 200 (219) NHL games,” said Grabner. “You think about how everything has gone by so quickly. My first ever pre-season game, I’m out on the ice playing against Chris Pronger, Scott Niedermayer, Ryan Getzlaf, Corey Perry and Teemu Selanne.

“And now, I am playing with a great group of teammates,” he continued. “Last year, we made the playoffs. Now, it’s a whole new season and we are ready for the challenge. I can’t wait to get it going.”

“My son (Aidan), he’s a huge hockey fan. He loves playing when I come home from the rink. He’s really into it.”

Does that mean there could be another Grabner playing in the NHL one day?

“I don’t know about that,” said the 25-year-old, “I’ll be happy if he does what makes him happy. That’s what really matters.”

Michael Grabner would certainly know all about that.