Patrice Bergeron: A Star On and Off the Ice

Whether it’s gracing the front of a video game, netting multiple honours, or helping needy kids in Quebec, Patrice Bergeron has it all covered. 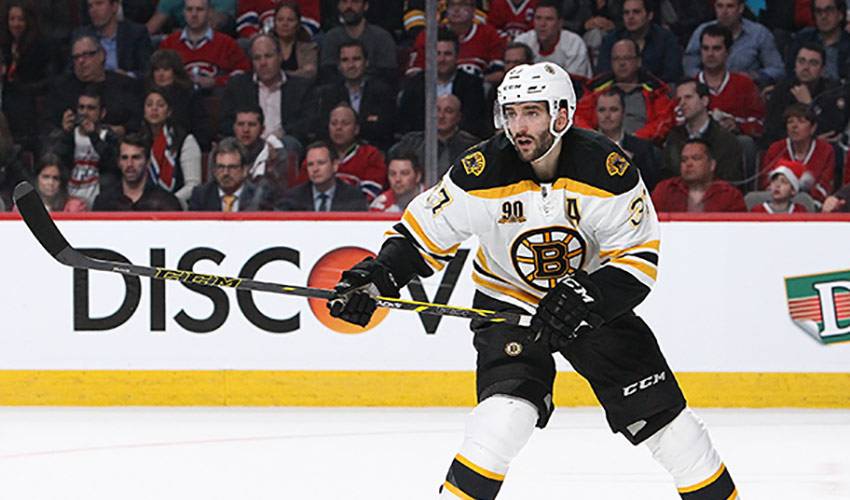 Whether it’s gracing the front of a video game, netting multiple honours, or helping needy kids in Quebec, Patrice Bergeron has it all covered.

He’s been a busy man of late, including a memorable night at the NHL Awards, when Bergeron won the Selke Trophy as the League's top defensive forward and the NHL Foundation Award, which goes to the player "who applies the core values of (ice) hockey commitment, perseverance and teamwork to enrich the lives of people in his community.

The Boston forward, who won the Selke in 2012, was also voted as the EA Sports NHL 15 cover athlete.

“My teammates have everything to do with the awards I’ve received,” Bergeron told NHLPA.com. “They help me so much and make me a better player.”

The EA Sports recognition proved to be a big hit with Bergeron’s family and friends.

“They are happy and excited for me,” said the 28-year-old, widely regarded as one of the league’s elite two-way players. “Lots of my friends reminded me about the fact we played the game together as kids and teenagers. And now being on the cover is pretty special for them and myself also. I never imagined that it would happen one day.”

While it’s his individual exploits on the ice that attract the most attention, Bergeron continues to make an impact in the community, including his efforts with Patrice’s Pals, Boston Children’s Hospital, Defending the Blue Line, Floating Hospital for Children at Tufts Medical Center, Franciscan Hospital for Children and Massachusetts General Hospital.

This summer, Bergeron, who won Olympic gold with Team Canada in Sochi, will spend time in his native Quebec, teaming up with friend and fellow player Simon Gagne, to raise money for two causes.

“It’s a Pro-Am hockey game that has professional players mixed with amateurs, called Pro-Am Gagne-Bergeron,” said the centreman, who was born in L'Ancienne-Lorette, a city in central Quebec. “Last year, we raised $100,000 for two charities: Leucan, which helps kids in Quebec that have leukemia and Le Pignon Bleu, a program that helps kids in Quebec City. These are kids that don’t eat breakfast or any food before going to school. There are 5,000 kids, in Quebec City only, that don’t eat breakfast.”

It’s a given Bergeron will attract a lot of attention when the puck drops on this edition of the annual event, fans eager to get an autograph, a picture taken, or ask about his big evening at the NHL Awards.

It’s also a certainty the Bruins’ No. 37 will acknowledge his teammates, the ones he consistently points to as the driving forces behind his successes.

“I feel very lucky to be surrounded by such an amazing group,” said Bergeron.