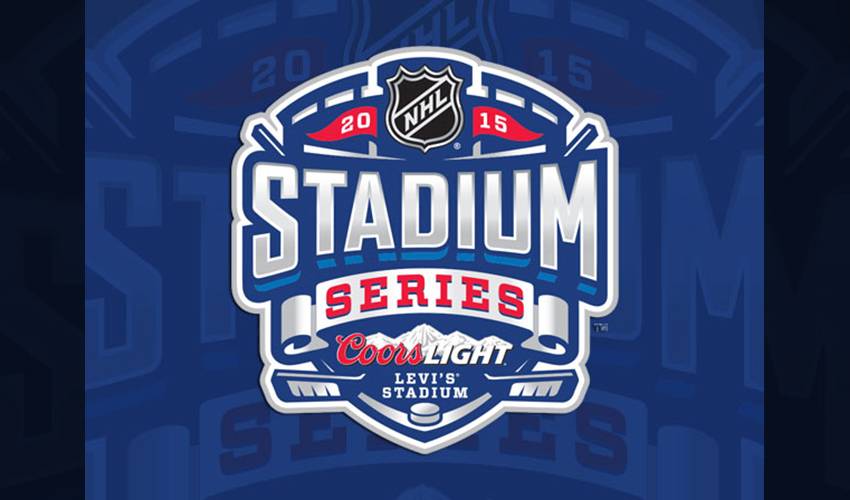 NEW YORK (August 6, 2014) – The San Jose Sharks will play host to the Los Angeles Kings in a regular-season outdoor NHL® game at Levi’s® Stadium on Saturday, Feb. 21, 2015, at 7 p.m. PT/10 p.m. ET, the National Hockey League announced today. Part of the 2015 Coors Light NHL Stadium Series™, this Northern California vs. Southern California rivalry will be televised nationally in the U.S. on NBCSN and in Canada on Hockey Night In Canada and TVA Sports 2.

Launched last season by the NHL, the Coors Light NHL Stadium Series™ featured four games in 2014, all of which were played in sold out stadiums. The series started in Los Angeles with the NHL’s first outdoor game played in California, showcased the first two hockey games ever played at Yankee Stadium and concluded with the first-ever NHL game at Soldier Field.

“The growing excitement around NHL hockey in California, the intensity of last season’s playoff series between these teams and the state-of-the-art setting at Levi’s® Stadium will bring a thrilling new dimension to the Kings-Sharks rivalry,” NHL Commissioner Gary Bettman said. “We thank the Sharks, the Kings, Coors Light, the San Francisco 49ers, Levi’s® Stadium and everyone involved in producing the next episode of our Coors Light NHL Stadium Series.”

Beginning at 10 a.m. PT/1 p.m. ET on Thursday, Aug. 7, a limited number of tickets to the 2015 Coors Light NHL Stadium Series™ will be available for purchase by San Jose Sharks® season-ticket holders, Los Angeles Kings® Season-Ticket Members and Levi’s® Stadium SBL Members. This opportunity is available on a first-come, first-served basis, while supplies last. Information regarding ticket availability for the general public will be released at a later date.

The Sharks will be making franchise history at the 2015 Coors Light NHL Stadium Series.™ Having played 1,738 NHL regular-season games to date, when they take the ice at Levi’s® Stadium, the franchise will be making its debut in an outdoor game.

“We are honored and elated that the NHL has selected the San Jose Sharks to participate in the NHL’s 2015 Coors Light Stadium Series™ and is bringing this magnificent event to the Bay Area,” said San Jose Sharks Chief Operating Officer John Tortora. “This event celebrates the growth of the great game of hockey in San Jose and recognizes the incredible support and passion of Sharks fans all over Northern California. We know our fans will bring the electrifying atmosphere of SAP Center at San Jose to Levi’s® Stadium on Feb. 21 and we are looking forward to showcasing Sharks Territory outside and under the lights.”

At Levi’s® Stadium, the Kings will be participating in their second regular-season outdoor NHL game. On Saturday, Jan. 25, 2014, a festive crowd of 54,099 packed Dodger Stadium to see the spectacle of the NHL’s first outdoor game played in California. In one of the most memorable days in the history of hockey in Southern California, the Anaheim Ducks defeated the Kings, 3-0.

“The LA Kings are honored to once again be selected to represent the National Hockey League at the 2015 Coors Light NHL Stadium Series,” said Luc Robitaille, Kings President, Business Operations. “This event is a tremendous example of how our game continues to grow and evolve in the state of California and it will bring a great deal of exposure to sports fans throughout the region. The event at Dodger Stadium in front of 54,099 fans this past January was a historic moment for the Kings and for our fans, and our players and the entire Kings organization are looking forward to another fun and exciting game this time against our Northern California and Pacific Division rivals, the San Jose Sharks.”

The Sharks and Kings have met 41 times (regular season and Playoffs) since the start of the 2010-11 season, the most of any two NHL clubs in that span. That total includes three postseason meetings, highlighted by seven-game series in each of the past two Playoffs.

“California has become known for outstanding NHL hockey, which will be on display in February when the San Jose Sharks host the Stanley Cup Champion Los Angeles Kings outside at the new Levi’s® Stadium,” said Don Fehr, NHLPA Executive Director. “It will be a memorable game, given the ultra-competitive rivalry between the Sharks and the Kings and the spectacular setting and facility in which it will take place. The players are already looking forward to it.”

“The Coors Light NHL Stadium Series has been a huge hit with fans, of course, but also with our retailers, distributors, and employees,” said Adam Dettman, director, sports and entertainment marketing at MillerCoors. “The beer that is committed to delivering cold refreshment is the perfect fit for hockey, a sport that’s embracing the cold with these outdoor games. For Coors Light, we now can build great momentum as the NHL season moves from the NHL Winter Classic®, to the Coors Light NHL Stadium Series, to the Stanley Cup® Playoffs.”

Levi’s® Stadium is the new home of the San Francisco 49ers, utilizing the best technology found in Silicon Valley to design the world’s smartest outdoor sports and entertainment venue. Having hosted its first event on August 2, the state-of-the-art facility recently became the first U.S. stadium of its kind to achieve LEED Gold certification as new construction.

“With Levi’s® Stadium located in the heart of Sharks Territory, the people of Santa Clara are ecstatic about hosting the international phenomenon that is the NHL Stadium Series,” said Julio Fuentes, Executive Director of the Santa Clara Stadium Authority, the entity that owns Levi’s® Stadium. “We look forward to the opportunity to showcase the versatility and fan-friendly nature of this venue with hockey fans around the world.”

Since the NHL established the tradition of hosting regular-season games outdoors to celebrate hockey, fan across North America have expressed their desire for those celebrations to spread across the hockey landscape.

Last season, the Bridgestone NHL Winter Classic® and Coors Light NHL Stadium Series™ set viewership and ratings records nationally in both the U.S. and Canada as well as locally in multiple markets. The League’s six most-watched regular season games in the U.S. within the past 39 years are all outdoor games.

NHL Network™ and NHL.com will provide extensive coverage live from the event leading up to and after the game. NHL Social™ will have exclusive coverage on all social platforms, including the use of the hashtag #StadiumSeries.

Additional information relating to the 2015 Coors Light NHL Stadium Series™ will be released at a future date. Fans can sign up for news on NHL Events at www.nhl.com/StadiumSeries2015.