The joint initiative between the NHL and the NHLPA returns for its 16th season. 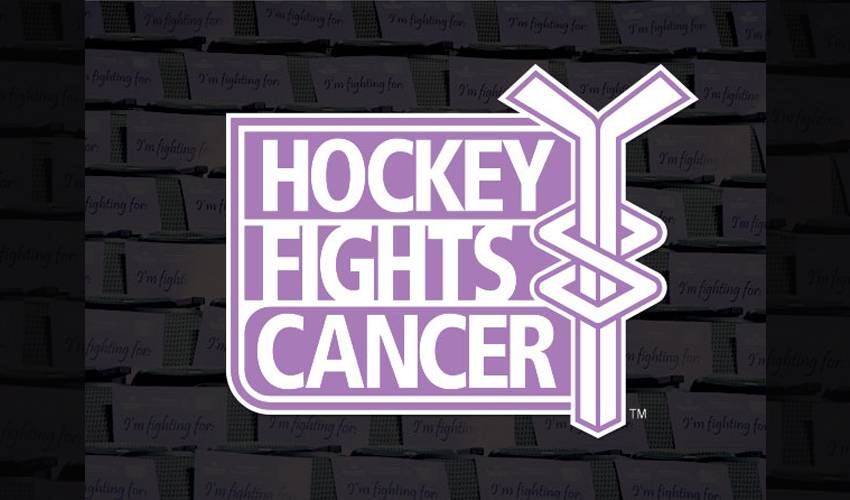 Joint Initiative Between NHL and NHLPA Returns for 16th Season

NEW YORK / TORONTO (October 20, 2014) – Fans are asked to help the hockey family fight cancer as part of the National Hockey League Players’ Association (NHLPA), and the National Hockey League’s (NHL®) annual Hockey Fights Cancer™ initiative, taking place from Oct. 20 – Nov. 17, 2014. Since its inception in 1998, the joint charitable initiative has been dedicated to raising awareness for national and local organizations involved in cancer care and research. Together, the NHLPA and NHL will distribute more than $200,000 in grants to national and local cancer organizations in all 30 NHL markets.

“Over the years, our hockey family – fans, players, Club personnel, broadcast partners – has continuously shown their relentless spirit in helping one another in the fight against cancer,” said Ken Martin Jr., NHL Vice President of Cause Marketing. “The NHL is proud to join forces with its hockey community to help give back and support those who need it most.”

“The NHLPA is proud to join with hockey fans to help raise money not only to support the research being done to find a cure for this terrible disease, but to also support those courageous people that are battling cancer,” said Devin Smith, Chairman of Goals & Dreams Fund.”

• NHL Social™: Fans can stay connected on Hockey Fights Cancer initiatives happening around the League by following the NHL on Twitter (@NHL), Instagram (Instagram.com/NHL), Facebook (Facebook.com/NHL), and Snapchat (“NHL”). All platforms will embrace the lavender campaign color and use the official hashtag #HockeyFightsCancer

• In-Store Donations: During the campaign, fans can stop by the NHL Powered by Reebok Store to make a donation, no purchase necessary. The National Hockey League Foundation and Reebok will each match every $1.00 donated by fans (up to $5,000 in total donations)

• In-Arena Awareness Night: All 30 NHL Clubs will designate one home game as its Hockey Fights Cancer Awareness Night and will include fan engaging events and activities (full schedule below). Visit each NHL Club website for more information

• National Broadcast Night: Wednesday, Nov. 5 is the national Hockey Fights Cancer Awareness Night featuring Detroit Red Wings at New York Rangers at 8:00 p.m. EST. This game will air nationally in the U.S. on NBCSN, and across Canada on Sportsnet ONE in English and TVA Sports in French

• EA SPORTS: Throughout the campaign, this initiative will be featured in NHL® 15, integrated into the game’s Hockey Ultimate Team game mode. EA SPORTS will also donate $10,000 to Hockey Fights Cancer

Hockey Fights Cancer has partnered with five cancer organizations to help fund and raise awareness about new and existing cancer-fighting programs. Hockey Fights Cancer will donate to Movember which has earmarked its grant to fund its men’s health initiatives, specifically in the areas of prostate and testicular cancer and mental health. The Leukemia & Lymphoma Society will use its donation to help fund an LLS portfolio of pediatric and young adult blood cancer research grants. A grant to Prostate Cancer Canada will be used to help fund its PCC Rising Star in Prostate Cancer Research program, which provides salary and research support for outstanding research scientists initiating careers as independent investigators in prostate cancer research. ZERO – The End of Prostate Cancer will use its donation to provide free mobile testing in select markets. Pancreatic Cancer Action Network will allocate its donation to its Community for Progress mentorship and professional development program, which fosters collaborations among scientists and future scientific leaders to strengthen the pancreatic cancer research community. In addition, Hockey Fights Cancer will distribute $5,000 to each NHL Club to support local cancer organizations in their respective markets.