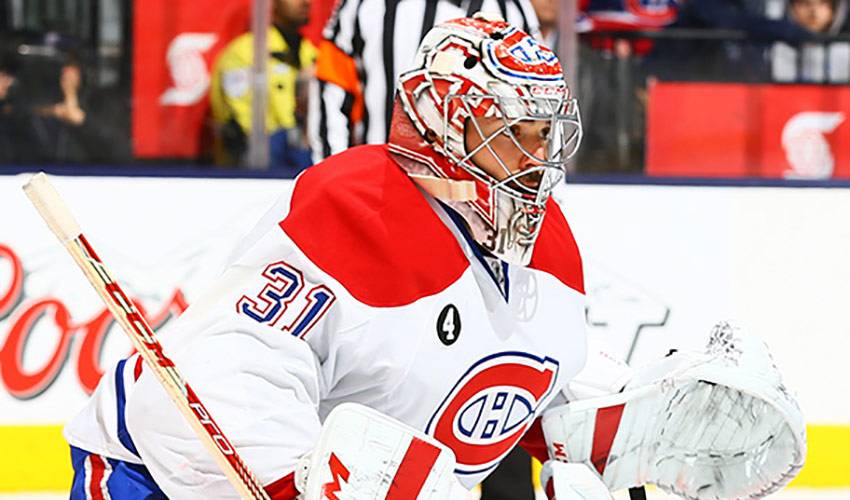 Carey Price once again showed why he is regarded by many as the best goaltender in the game, turning aside 43 Ottawa shots in Montreal’s series-clinching 2-0 win in Game 6 of the all-Canadian matchup.

Outshot 30-7 over the final two periods, the Canadiens were under constant siege from a spirited Senators squad looking to knot their Eastern Conference quarterfinal at three games apiece.

Recently nominated for the Vezina Trophy as the league's top goalie, Price was at the top of his game on Sunday after a 5-1 loss on home ice in Game 5.

Montreal tallied the first six shots of the contest, but Ottawa peppered Price 16-3 in the second frame.

STAT PACK: After round one of the playoffs, Price has made 186 saves on 198 shots, yielding a .939 save percentage and a 1.94 goals against average.

NEED TO KNOW: Price’s dad, Jerry, was a goaltender. He was chosen by the Philadelphia Flyers in the eighth round (126th overall) of the 1978 NHL Draft.

DAZZLING DEBUT: Price made his NHL debut on October 10, 2007, against the Pittsburgh Penguins. The end result? He registered 26 saves in a 3–2 Montreal win.

MEDAL MAN: After netting silver medals at the World U-17 Hockey Challenge and World U18 Championships, Price struck gold at the 2007 World Junior Championships and the 2014 Winter Olympics. In Sochi, he won all five games and was named the tournament’s top goaltender.

ALL EYES AND EARS ON PRICE: “The one thing I would really want the hockey world to know about Carey is he's probably our biggest leader,” said Dale Weise. “He doesn't say much or say things that often, but when he does, the room is silent and because of that, the boys want to work extremely hard in front of him.”

HONOURABLE MENTIONS: Zach Parise (2G) was instrumental in leading the Minnesota Wild to a second-round date with the Chicago Blackhawks, after a 4-1 home ice win over St. Louis in Game 6. Devan Dubnyk (30) saves once again stood tall for the Wild. Brendan Gallagher (1G) opened the scoring for Montreal against Ottawa.

FRIDAY/SATURDAY STANDOUTS: Devan Dubnyk made 36 saves, including 19 in the third period, helping lead the Minnesota Wild to a 4-1 win in Game 5 of their series against the St. Louis Blues. Carl Hagelin’s overtime tally in Game 5 against Pittsburgh sent the New York Rangers into the second round of the Eastern Conference playoffs. Craig Anderson made 45 stops, 19 in the third frame, in Ottawa’s 5-1 triumph over Montreal in Game 5 of their series. Jiri Hudler (2G, 2A) was huge in Calgary’s 7-4 win against Vancouver, as the Flames are on to round two. Duncan Keith netted his second game-winning marker of the series, as Chicago ousted Nashville via a 4-3 score in Game 6. Petr Mrazek (28 saves) was stellar in Detroit’s 4-0 blanking of Tampa Bay in Game 5.