May 20, 2015
By:
Chris Lomon
Marcus KrugerPlayoff Performer of the NightChicago Blackhawks

With the a fourth overtime period looming, Marcus Kruger picked the perfect time to net his second-career playoff winner. 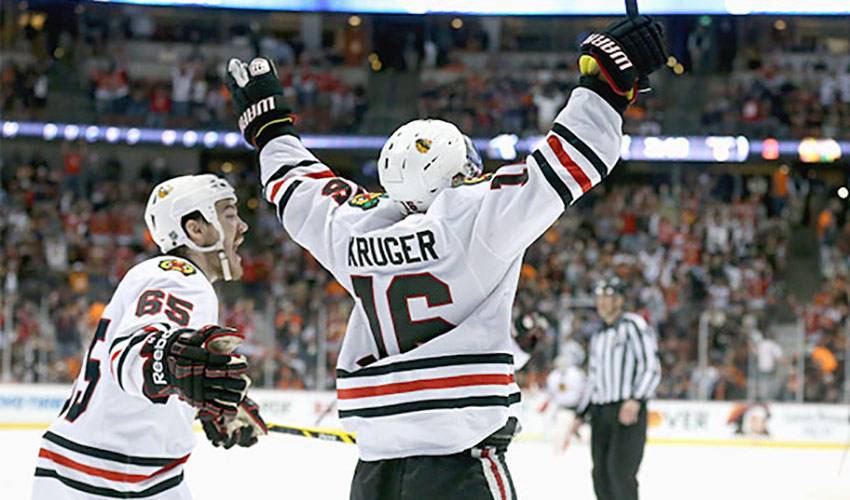 With the a fourth overtime period looming, Marcus Kruger picked the perfect time to net his second-career playoff winner, tipping in a Brent Seabrook shot with 3:48 left on the clock to give Chicago a 3-2 win over Anaheim.

After losing Game 1 of the Western Conference final against the Ducks, the Blackhawks responded with a hard-fought victory on Tuesday night, as the series shifts back to Illinois for the next two contests.

The 24-year-old Kruger now has two goals in 12 post-season games this year.

STAT PACK: Kruger had two shots on net in 29:04 of ice time, taking 48 shifts. He also blocked five shots and played 4:26 when the ‘Hawks were shorthanded, in what was the longest playoff game in team history.

HOW SWEDE IT IS: Kruger has won three medals playing for his native Sweden, including a bronze at the 2010 World Junior Championships. The forward took home silver at the 2011 World Championships and represented Sweden in the 2014 Winter Olympics in Sochi, also winning silver.

DROP THE PUCK: In 2013-14, Kruger shared sixth ranking in the NHL with a career-best 56.7 faceoff win percentage. He also won a career-best 438 faceoffs.

LEADING THE WAY: Kruger captained his Djurgarden-Jr squad in 2008-09, scoring nine goals and recording 39 points in 34 regular season games. He was also a finalist for the Swedish Hockey League Rookie of the Year for the 2009-2010 season.

HONOURABLE MENTIONS: Corey Crawford made 60 saves in Chicago’s win, including a huge stop against Corey Perry in the second overtime period. Frederik Andersen made 53 saves for Anaheim. Duncan Keith (49:51) and Francois Beauchemin (46:29) led their respective teams in total ice time.