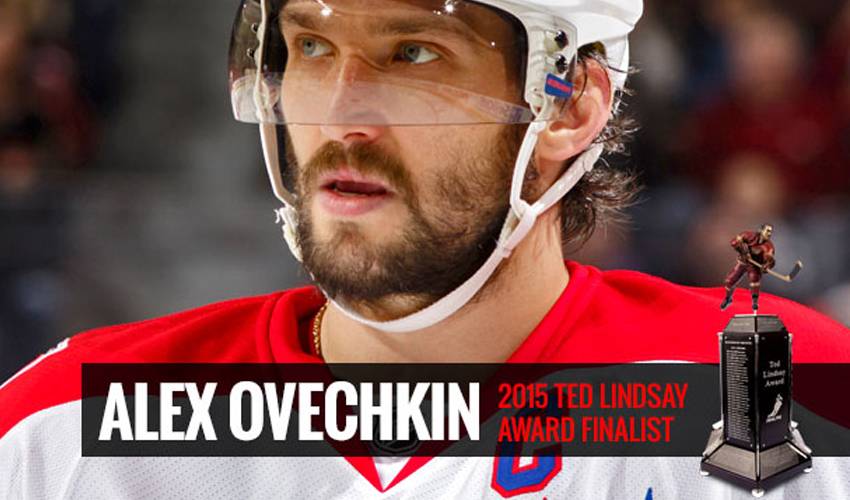 With a trio of Ted Lindsay trophies already bearing his name, one of hockey’s most dynamic players and personalities once again finds himself in a familiar position.

For those who see him perform day in and day out, it’s a deserving recognition of his abilities.

“It's definitely better to have him on your team because he is a game changer,” said veteran Caps’ forward Troy Brouwer. “He has the ability to take over games and win them for his team.”

Ovechkin also seems to have the uncanny knack for making hockey enjoyable throughout the stresses of an 82-game regular season and beyond.

“From being around Alex, I’ve learned to enjoy the game,” offered Michael Latta. “It can be a lot in your first couple seasons, feeling the pressure to perform. You see why he performs at such a high level because of the passion he has. He loves to score goals and he has a lot of fun doing it. He's a rare personality that has been really fun to be around.”

And, as the hockey world has become accustomed to, Ovechkin is an elite performer, armed with a well-earned reputation as one of the sport’s most accomplished and gifted offensive superstars.

In 2014-15, he became the sixth NHL player to record six career 50-goal seasons and was honoured with his fifth finalist nomination for the Hart Memorial Trophy, an award he has won on three occasions.

Could Ovechkin be in store for Ted Lindsay No. 4?

“Aside from the fact that he's the best goal scorer hockey's seen in a long time, he hits like a truck,” noted Latta. “Not many superstars wear down other teams’ top shutdown pair like a fourth line energy guy, but he does. Teams always have their top pairing out against him and he creates so much room for him and (Nicklas) Backstrom because no one wants to get caught with their head down while he's coming in on you. Any time you get that combination of scoring ability and physical presence, it’s scary. He'll flatten you and a lot of the time give you a minus, too.”