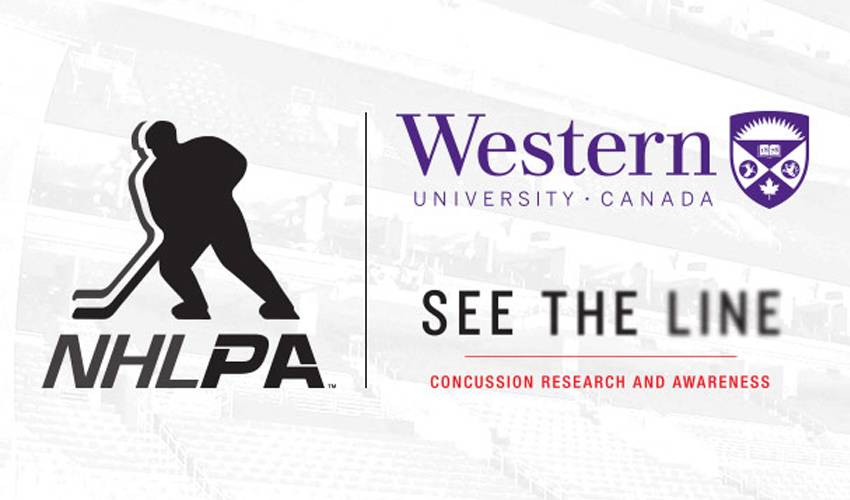 Western University announced today that the National Hockey League Players’ Association (NHLPA) is making a challenge gift of $500,000 to support concussion research at Western. The announcement was made at See the Line – an annual day-long event focused on concussion research and awareness held at Western University in London. It is presented in partnership by London Health Sciences Foundation, the Fowler Kennedy Sport Medicine Clinic, and Western University’s Schulich School of Medicine & Dentistry, as well as London’s hospitals, research institutes, and the faculties of Health Sciences and Engineering at Western.

“Enhancing the ability to diagnose and treat concussions would obviously be important achievements, and we hope that this contribution goes a long way to further research in this area,” said Don Fehr, NHLPA Executive Director. “We are pleased to provide support to Western in this critical area.” This generous support will serve as the foundation for a $3.125 million fund that will enable a team of researchers, led by Arthur Brown, PhD, at Schulich Medicine & Dentistry and Robarts, to investigate and develop new ways to treat concussions and to arrest the short- and long-term devastating consequences of concussions.

Brown is an associate professor and a principal scientist at Robarts working collaboratively with Greg Dekaban, PhD, director, Molecular Medicine at Robarts, and Dr. Michael Strong, dean, Schulich School of Medicine & Dentistry. Their work has led to the development of a research program focused on three key areas: immunomodulation (treatment of injury-induced inflammation), neuro-restoration (maximizing the regenerative capacity of nerves after injury has occurred) and prevention of concussion-related dementia.

“We are fortunate to have a collaborative research environment in London dedicated to investigating all aspects of concussions, from the arena and lab to the patient’s bedside,” said Dr. Strong. “The strength of the research being conducted by Arthur Brown and an interdisciplinary team of researchers is putting us on a path to actively and effectively treat people with concussions. We are grateful to the NHLPA for their leadership commitment which is providing the catalyst to engage a broader team of supporters to drive concussion therapies beyond clinical trials and into clinical applications.”

Medical experts agree concussions are serious injuries to the brain, and may be associated with long-term conditions such as depression, early-onset dementia and even Alzheimer’s. In Canada, more than 160,000 people experience a concussion every year, and half of all concussions are sports-related. There are currently no treatments to ensure recovery from concussion or clinical indices to determine when an injured athlete can safely return to play.

“Whether it’s your child, sibling or parent – head injury is an important topic,” said Eric Lindros, honorary chair of See the Line. “Although predominant in sport and recreational activity, concussions are a common injury suffered also in less expected environments such as transport, including cycling or motor vehicle collision. The collaborative research conducted by Arthur Brown and his team has many benefactors that include, but are not limited to the athlete. With the help of the NHLPA and the challenge they’ve set forward to people everywhere, my hope is that this research will one day lead to full recoveries for everyone living with a concussion.”

This announcement begins a one-year challenge to Canadians across the country, as well as the global community, to raise an additional $2.625 million to support the development of novel strategies that stop the damage driven by inflammation caused by a concussion, as well as increase regenerative nerve growth and improve long-term outcomes.

Lindros, together with a group of committed volunteers, is building a team of concerned parents, athletes and philanthropists to support this innovative research.

The keynote speaker for the Symposium was Dr. Ann McKee, world expert in the neuropathology of chronic traumatic encephalopathy, professor of Neurology and Pathology at Boston University School of Medicine, director of Neuropathology and Brain Banks for New England VA Medical Centers and co-director for the Center for the Study of Traumatic Encephalopathy.

Keynote speaker: Dr. Ann McKee, professor of Neurology and Pathology at Boston University School of Medicine, director of Neuropathology and Brain Banks for New England VA Medical Centers and Co-Director for the Center for the Study of Traumatic Encephalopathy.

Dr. Michael J. Strong will make the formal announcement to media and guests at the reception at 6 p.m. A fundraising gala dinner will follow in the Great Hall at 7 p.m. Please note that the dinner portion is not open to media.

Media will have the opportunity to speak with:

See the Line is a collaborative initiative between Western University’s Schulich School of Medicine & Dentistry including Robarts Research Institute and the Faculties of Health Sciences and Engineering at Western, London Health Sciences Foundation, Lawson Health Research Institute, Children’s Health Foundation, Children’s Health Research Institute, Fowler Kennedy Sport Medicine Clinic and the Brain Injury Association of London and Region. It combines the cumulative experience of world-class acute sport concussion clinical care and research leaders in London, with the aim of reducing the incidence of concussion, improving care through research, and educating athletes, coaches and parents about the serious impact of concussions. For more information visit www.seetheline.ca