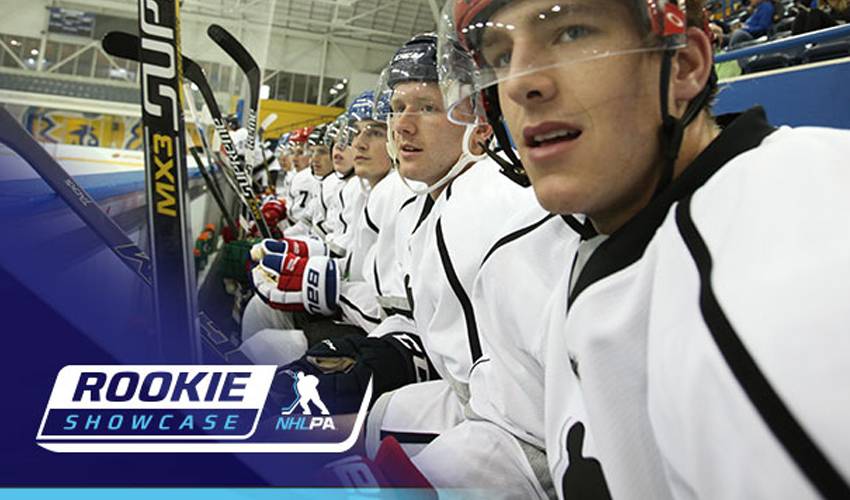 The rookies awoke bright and early Tuesday morning for the second and final day of the 2015 NHLPA Rookie Showcase. The group of nearly 40 rookies and prospects boarded a bus at their downtown hotel and headed to the Mattamy Athletic Centre – former home of Maple Leaf Gardens – for a full day of memorabilia shoots and a friendly scrimmage.

Upper Deck had a variety of stations set up for the players to filter through over the course of the day, including both on and off-ice photo shoots. The players suited up in their NHL team uniforms and were photographed doing a wide variety of poses and movements for both still and action shots that will be used on some of their very first trading cards. Those cards will go to print in Upper Deck hockey card sets that follow the rookies playing in their first NHL games.

The rookies trying their hand at figure skating #NHLPARookieShowcase pic.twitter.com/2Fz5zYyyK8

EA Sports also had their 360-degree photography station set up for collecting player head scans to use in future installments of the NHL video game series.

Later in the day, the rookies were split into two teams and suited up for a friendly scrimmage. All of the top five draft picks were on Team White but Team Black managed to pull out the win in the end.

Group photo before they play a scrimmage to end the day. #NHLPARookieShowcase pic.twitter.com/71MMBoXCnm

To cap off the two-day event, the rookies headed to Real Sports for a fun-filled dinner and a chance to play the EA Sports NHL 16 game.

With the seventh annual NHLPA Rookie Showcase in the books, the players will disperse in the morning between a variety of destinations – about half of the group will depart for the Rookie Orientation Program, while others will return home and some will get settled in their NHL cities.

And for a full recap of day one, visit: http://www.nhlpa.com/news/nhlpa-rookie-showcase-day-one-wrap-up